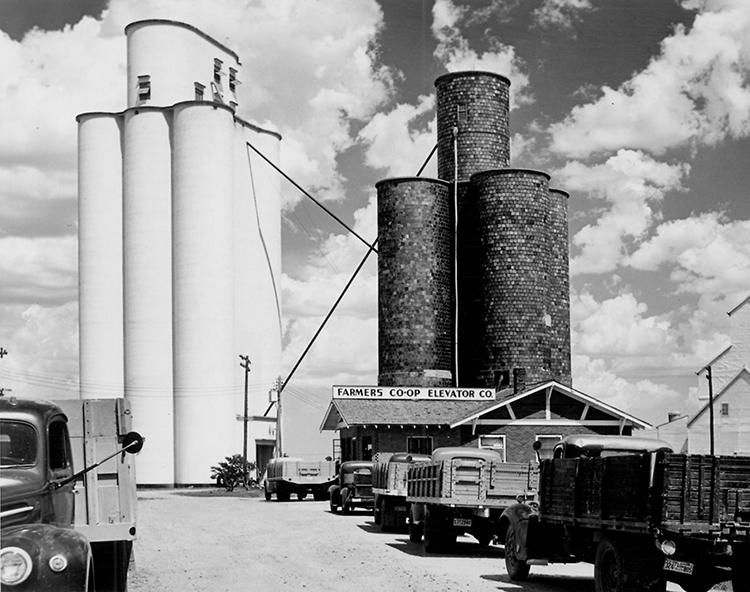 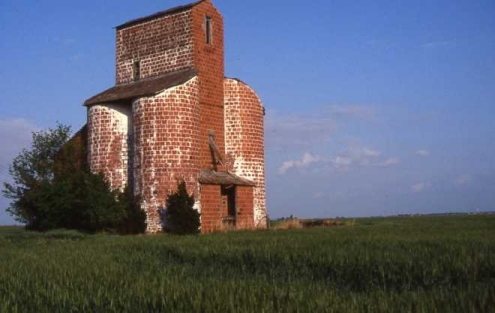 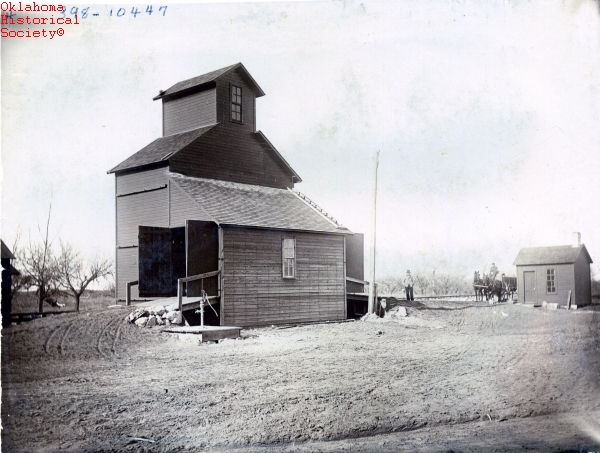 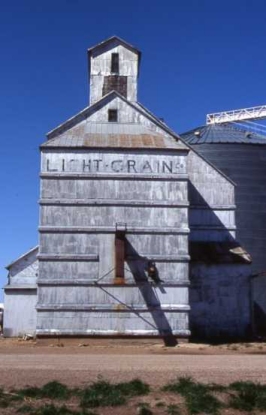 Oklahoma's grain elevators originated during the development of the state's commercial agriculture in the late nineteenth century. Many Oklahoma agribusinesses emerged at that time because an adequate labor supply (non-Indian settlement), a cash crop (winter wheat), and a reliable transportation system (the railroad) made it possible to successfully market a product. Intermediate to this process was the country elevator, which received grain from the farmer. The grain was treated and elevated to the top of a building from which gravity dispensed it to railroad cars destined for a milling or distributing plant.

Elevators were initially built of wood, with walls constructed of two-inch-thick planks laid flat and spiked together or with lapped boards placed on a balloon frame stabilized by steel tie rods. The wooden sides of these rectangular structures were often covered by corrugated iron. Subsequently, elevators with circular bins were constructed with steel-plate panels or ceramic-tile blocks. Beginning in the 1920s builders such as Chalmers and Borton of Hutchinson, Kansas, used concrete and slip-form technology to construct those elongated (125 feet) and cylindrical elevators familiar to most Oklahomans.

There were three classes of grain elevators. One was the country elevator. The terminal elevator was another, of which most were located at Enid. Possessing immense storage capacity, the terminal elevator, with its long, parallel lines of soaring concrete bins, received grain from country elevators and then distributed it to buyers worldwide. The third type was the processing elevator, which milled locally or regionally received grain into flour for distribution and sale. In 1937 some forty-five mills processed twenty-three thousand barrels of flour daily. Sixty years later only four mills continued to operate.

Grain elevator management consisted of three types: independent, "line," and farmers'. The majority were independents, owned by local individuals or families. The line elevator was one of several owned by a single entity or corporation along one or more rail lines that also operated a terminal elevator. The farmer-owned elevator was professionally managed for the benefit of local wheat producers and was known as "the Co-Op" (cooperative). With populist overtones, the cooperative movement explains much of Oklahoma's political history through 1950.

By the end of the twentieth century the grain elevator had lost much of its economic significance. But its symbolic importance remained in that it captured the essence of a regional landscape, its history, and its culture.

W. David Baird, "Cathedrals of the Plains: The Grain Elevators of Western Oklahoma," The Chronicles of Oklahoma 60 (Spring 1992).

The following (as per The Chicago Manual of Style, 17th edition) is the preferred citation for articles:
W. David Baird, “Grain Elevators,” The Encyclopedia of Oklahoma History and Culture, https://www.okhistory.org/publications/enc/entry.php?entry=GR003.