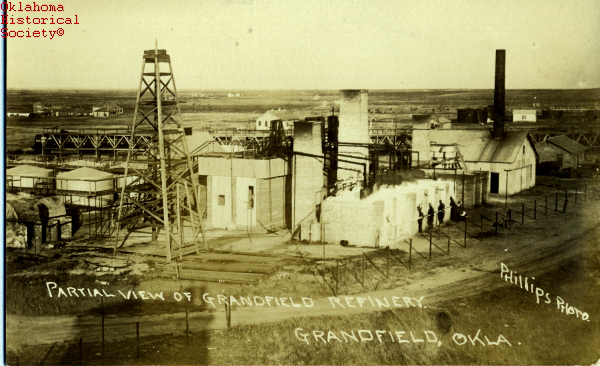 Located in Tillman County, Grandfield is situated twenty-two miles due southeast of Frederick, the county seat, at the intersection of U.S. Highway 70 and State Highway 36. Originally within the Big Pasture, Grandfield is thirty-five miles from Fort Sill, in Lawton, Oklahoma. Grandfield evolved as a result of the merger of Eschiti, a government-chartered town, and Kell City, a nonchartered town in the Big Pasture. Rev. A. J. Tant, a Baptist preacher, bought land between the two towns and offered lots to businesses and churches from either town that were willing to move their buildings to the new site.

Both of the towns accepted the plan, and by October 1908 the new site was occupied. A committee appealed to the federal government to establish a post office there. Assistant Postmaster General Charles P. Grandfield was helpful in granting the request. Consequently, the town was named in his honor. On January 16, 1909, Grandfield citizens voted, almost unanimously, for incorporation, and the post office opened January 21, 1909. In 1910 the population stood at 830.

Known as Grandfield, Oklahoma, "Where the Harvest Begins," the town has been a service center for a surrounding agricultural area that produces which wheat, cotton, and other farm output. Although the business district has declined drastically, the population has varied only slightly except when it peaked in 1960 at 2,606. In 1920 the Grandfield population was 1,990, but it declined to 1,116 by 1940. At the turn of the twenty-first century Grandfield had 1,110 citizens and was governed by a home rule charter. The 2010 census counted 1,038 residents. The Tillman County Bank of Grandfield (NR 92000796) and the Rock Island Depot (NR 96000978) were among several buildings listed in the National Register of Historic Places. The Grandfield Enterprise, later known as the Big Pasture News, has kept local citizenry informed.

The following (as per The Chicago Manual of Style, 17th edition) is the preferred citation for articles:
Louise Michael Watson, “Grandfield,” The Encyclopedia of Oklahoma History and Culture, https://www.okhistory.org/publications/enc/entry?entry=GR007.