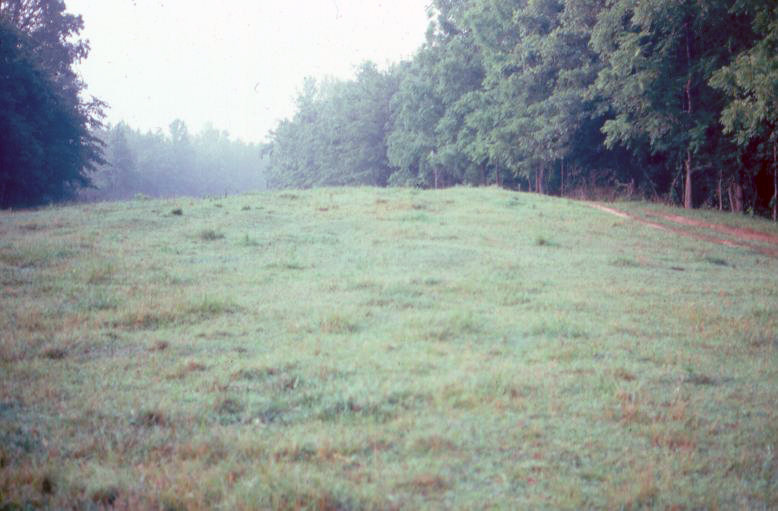 Developed agriculturalist groups, ancestral to the historically identified Caddo, occupied the Red River and its tributary streams in southeastern Oklahoma, southwestern Arkansas, northeastern Texas, and northwestern Louisiana. The Grobin Davis Mound Center in McCurtain County was inhabited during the earlier portion of the Caddo III period (circa A.D. 1200 to 1450). These prehistoric Caddoans had an agricultural economy focused on the growing of corn, beans, and squash, supplemented by the hunting of wild game. The Caddo also maintained a complex political/religious system manifested through a hierarchy of centers comprised of earthen mounds and ceremonial fields (plazas). The Grobin Davis Site represents one of the larger of these ceremonial centers in southeastern Oklahoma. Situated on a high terrace along the confluence of Little River and White Oak Creek, Grobin Davis consists of seven mounds and a central plaza within an area of some twenty-five acres.

In 1983 the Oklahoma Archeological Survey investigated the Grobin Davis Site to document its composition and layout. The two largest mounds represent platform or temple mounds. Temple mounds typically included a religious structure in which priestly elites presided over ceremonies. At Grobin Davis, these mounds are prominent on the landscape. Mound B is roughly 225 feet long by 90 feet wide and about 6 feet high. The other large mound (Mound C) is conical and seventy-five feet in diameter and may have functioned as a repository for deceased society members. The site's four remaining mounds are referred to as house mounds, and it is believed that such a structure was used as a charnel (mortuary) house, subsequently burned, and then mounded over with earth. These mounds are small, usually ten to twelve feet in diameter and only rising about one to two feet above the ground. Grobin Davis Mound Center is thought to represent the major ceremonial center in the western Little River drainage at this time. The site is owned by the Archaeological Conservancy and is listed in the National Register of Historic Places (NR 84002637).

The following (as per The Chicago Manual of Style, 17th edition) is the preferred citation for articles:
Robert L. Brooks, “Grobin Davis Site,” The Encyclopedia of Oklahoma History and Culture, https://www.okhistory.org/publications/enc/entry.php?entry=GR033.