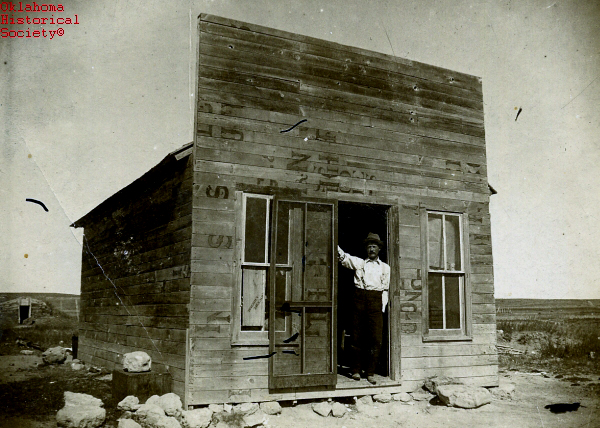 Located in Texas County, Hardesty lies on U.S. Highway 412/State Highway 3 twenty miles east of Guymon, the county seat. The original townsite was four miles northeast of the present community and in 1975 was partially excavated by archaeologists prior to the creation of Optima Lake. The first town stood near the Jones and Plummer Cattle Trail and hosted cowboys as they pushed herds north to Kansas. In 1887 the U.S. Post Office Department approved a Hardesty post office, with the name honoring Kansas rancher A. J. "Jack" Hardesty, who held interests in the area. That year the small village had a store, a saloon, a wagonyard, and several "sod" houses. By 1889 a newspaper, the Hardesty Times, served the town. In 1891 Richard B. Quinn acquired it and changed the mast to the Hardesty Herald. The Hardesty Kicker, which began in 1893, was another early journal.

Hardesty leaders lobbied the Chicago, Rock Island and Pacific Railway (CRI&P) to build through the town, but in 1901 the railroad laid tracks twenty miles west, creating Sanford (later Guymon). Most of the Hardesty businesses, including the Herald, and residents relocated to the new community. In 1906 Quinn wrote that "Old Hardesty town is no more." In 1911 a state gazetteer listed the community as a county post office, with two general stores. By 1918 it was just a country post office. In 1929 the CRI&P built a second line through Texas County, and investors led by J. L. Williams designated townsites along the route. They planned to name the new community Williams but locals pushed to reuse Hardesty, as the ghost town was just a few miles away.

The community revolved around agriculture, with wheat farming the prevalent enterprise. A newspaper, the Hardesty Times, soon reported the new town, and in 1931 a café, a grain elevator, an ice company, a hardware store, a jeweler, a lumber company, a grocer, a service station, and a general store advertised in its pages. In the mid-1930s drilling for natural gas commenced in the vicinity. The Great Depression and area dust storms stunted the growth. In 1946 an auto shop and a general store were the only businesses listed. In 1947 the town incorporated, and in 1950 the population stood at 201 residents. The business section grew, and in 1955 it held eleven entities, with several serving the local natural gas industry. In 1960 the population decreased to 187, but rebounded to 223 in 1970. In 1966 the U.S. Army Corps of Engineers began construction on the Optima Dam two miles north of Hardesty, and Lake Optima was impounded in 1978. In 1975 the federal government established the Optima National Wildlife Refuge. The lake never rose to the expected levels. The Old Hardesty Archaeological Site (NR 74001669) is listed in the National Register of Historic Places. In 1980 the population numbered 243 residents and 228 in 1990. In 2000 the Hardesty School District enrolled 152 students. That year the population stood at 277. In2010 the census reported 212 residents.

William B. Lees, "Panhandle Town Unearthed: The Archaeological and Historical Treasures of Hardesty," The Chronicles of Oklahoma 63 (Winter 1985–86).

The following (as per The Chicago Manual of Style, 17th edition) is the preferred citation for articles:
Larry O'Dell, “Hardesty,” The Encyclopedia of Oklahoma History and Culture, https://www.okhistory.org/publications/enc/entry.php?entry=HA019.