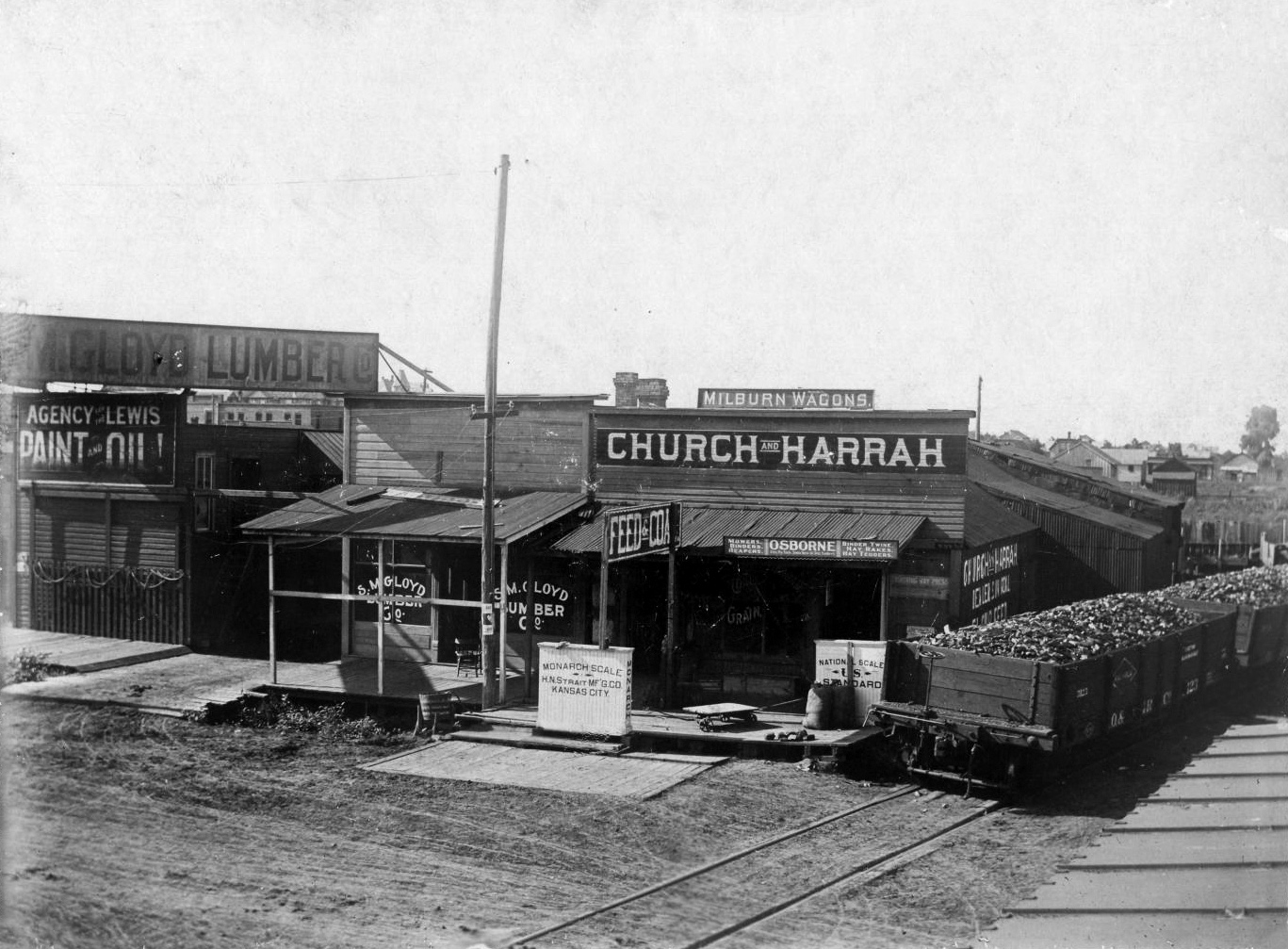 The town of Harrah, formerly Sweeney, is located in the extreme southeast corner of Oklahoma County at a natural ford in the North Canadian River. Formally renamed Harrah on December 22, 1898, the town takes its name from entrepreneur Frank Harrah, who developed and promoted the town in the 1890s.

The town owes its origin and continued existence to a favorable geographical location diverse enough to respond to the changing conditions of life in central Oklahoma. The first settler in the vicinity was Louis Navarre, a Potawatomi, who arrived in the early 1870s and observed that the area was well watered and provided plentiful fish from the river and game in the surrounding fields and woodlands. Later, after the partition of the area for reservations, the future site of Harrah lay just inside the Potawatomi reservation at a natural ford on the river. In 1891 E. W. Sweeney operated first a ferry and then a bridge there that greatly facilitated travel and commerce. To the north lay the Kickapoo Reservation with its fertile fields, which were soon to attract the attention of pioneers and land speculators, the latter of whose dealings sometimes fell short of ethical. The hills offered favorable conditions for orchards, and the surrounding fields proved ideal for truck gardens and field crops such as cotton. These factors prompted Harrah in April 1898 to purchase forty acres from Louis Navarre's allotment, which he promoted as the new town of Harrah. The early settlers included not only hopeful midwesterners and southerners but also Poles in numbers sufficient to give the town a distinctive central European heritage. The town incorporated in 1908. By 1910 the population numbered 356, and by 1920, 365.

Agricultural prosperity stimulated the construction of roads to transport produce to hungry markets, which in turn later determined the town's inclusion as a stop on the railroad. Economic prosperity, good communications, and water from nearby Horseshoe Lake, an ancient cut-off of the river, proved sufficient in 1923 for the Oklahoma Gas and Electric Company to choose the town as home site for an electric generating station that began operation in 1924. This provided economic stability for the town through the lean years of the Great Depression. In 1930 Harrah sheltered 693 residents and lost only seventy-three in the next decade. As inexpensive automobiles created a mobile postwar population in the 1950s, workers in nearby Oklahoma City moved into suburban areas that offered a different lifestyle. This same desire for a better life ultimately caused the town's residents to resist the city's encroachment and commence efforts to restore the town's independent and distinctive character during the last decades of the twentieth century.

Harrah has become a mixture of the past and the present. New residents are frequently lured by the town's reputation for high-quality schools for their children, a status earned in the opening years of the twentieth century. By 2000 the public schools enrolled approximately two thousand students in grades kindergarten through twelve. The power plant, grown through a series of enlargements over the decades, still produces power and jobs. The population burgeoned from 741 in 1950 to 1,931 in 1970, 2,897 in 1980, and 4,206 in 1990 as workers continued to move to Harrah and commute to jobs in nearby larger centers. Harrah's downtown, once nearly abandoned for new shopping centers to the south and west, has begun to revive with its own shops and services. Orchards and produce farms have reasserted their importance and attract visitors during season; cotton, absent for over half a century, has reappeared in the fields alongside the dominant corn, soybeans, and alfalfa.

A new interest in the quality of life has led the town to address such issues as parks and recreation; and new residents have joined with those of longer standing to form a wide variety of civic clubs, a historical society, and annual town events that emphasize the town's own character and strive to ensure its continuance for the future. Early-twentieth-century newspapers, including the Enterprise and the Tribune, were superceded by the News and the Herald, the latter still in publication in 2000. Under a home rule charter the city is operated by a manager-council form of government. The 2000 census recorded 4,719 residents, and the 2010 census registered 5,095.

The following (as per The Chicago Manual of Style, 17th edition) is the preferred citation for articles:
Ted Honea, “Harrah,” The Encyclopedia of Oklahoma History and Culture, https://www.okhistory.org/publications/enc/entry.php?entry=HA030.