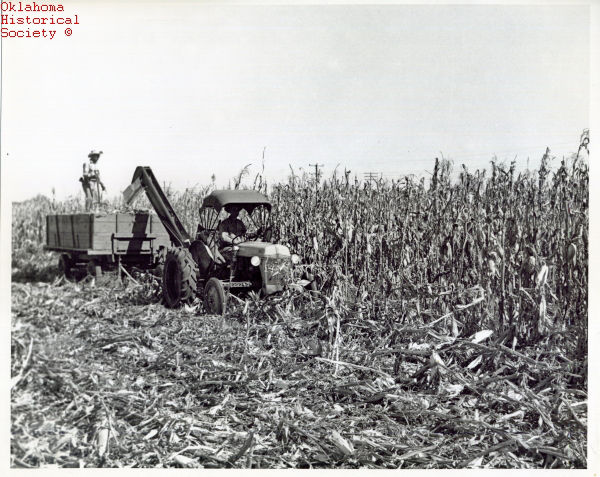 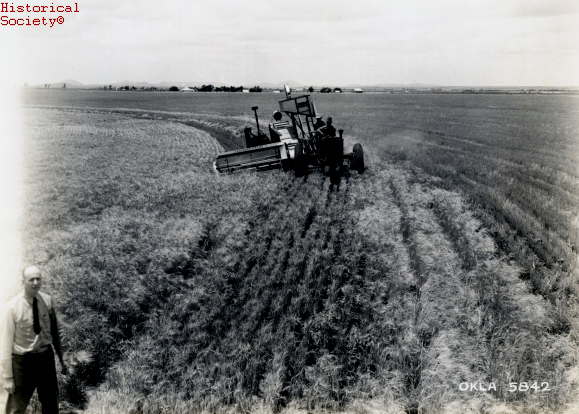 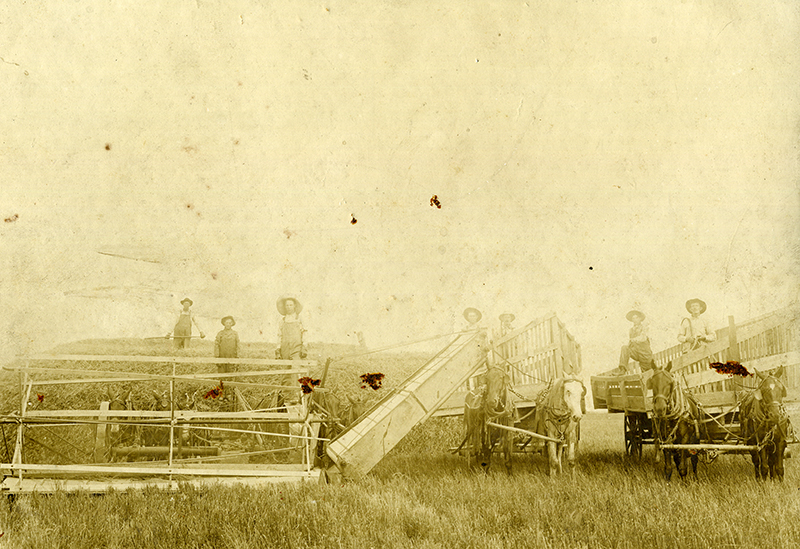 A harvest conjures the image of a farming community working to gather crops of wheat, corn, cotton, soybeans, or oats. Despite its harsh climate, Oklahoma has a long history of harvests, and the diverse issues associated with the term require broad and long-term analysis. Long before the Five Tribes' removal to the area, Kiowa, Plains Apache, and Wichita tribes traded their harvested products of pemmican, bison robes, and other trade goods for rice, maize, and additional crops provided by semisedentary tribes outside the area. The Kiowa harvested the cottonwood and post oak for fuel, acorns for food and a flavored drink, and prickly pear thorns for manufacture of bird arrows. To offset lean years when bison hunts proved inadequate, tribal fishermen set up a weir of six-foot poles in deep, quiet water and used a basket trap. The harvesting of berries, chokecherries, and wild turnips were also a common occurrence among the nomadic tribes.

The harvest concept took a new meaning with the Five Tribes' relocation in the 1830s. Long before removal, the Cherokee, Choctaw, and other groups had already adopted sedentary farming practices. Once in Indian Territory, they planted and harvested traditional crops on their farms. The American Civil War (1861–65) and subsequent governmental seizures of tribal lands devastated the economies of the Five Tribes. Opening the territory in the form of land runs and lotteries to settlers in the late 1800s and early 1900s facilitated more traditional approaches to farming and harvests. With the lifeblood of Oklahoma communities centering on the harvest, the twentieth century ushered in agricultural mechanization whereby small farming communities grew into larger towns with grain elevators, farmers' markets, and implement dealers.

The notion of harvest changed again in Oklahoma with the Dust Bowl and Great Depression during the 1930s. John Steinbeck's The Harvest Gypsies: On the Road to the Grapes of Wrath (1936) depicts Okies leaving their wind-blown farms and homes to find work in California, Oregon, and Washington toiling to gather in grapes, prunes, apples, and cotton. Steinbeck's sympathy for the harvesters is seen in his description of them as nomadic and poverty-stricken, finding their next meal with each crop's harvest season. In 1938 Steinbeck reported 150,000 homeless harvesters in California; many came from Oklahoma. While numerous Californians disdained Okies, Steinbeck had keen insight regarding their role in California's economy. The harvesters, Steinbeck said, are needed, but they are hated.

As Oklahoma entered the twenty-first century the harvest remained key to its economy. Whether it is farm-fresh catfish enjoyed at a restaurant or watching professional cotton or wheat harvester crews with their magnificent, modern machinery, the harvest remained integral to Oklahoma's tourism industries, machine and tool suppliers, and implement dealerships. In the 1990s Oklahoma's yearly harvests averaged approximately 14.5 million bushels of sorghum, 126 million bushels of wheat, 260,000 bales of cotton, 5 million bushels of soybeans, 197 million pounds of peanuts, and 3.6 million tons of alfalfa hay and other silage. While statistics are impressive, the multiplier effect related to agricultural harvests is immeasurable in its relationship to Oklahoma's modern economy.

The following (as per The Chicago Manual of Style, 17th edition) is the preferred citation for articles:
Darin J. Combs, “Harvest,” The Encyclopedia of Oklahoma History and Culture, https://www.okhistory.org/publications/enc/entry.php?entry=HA041.