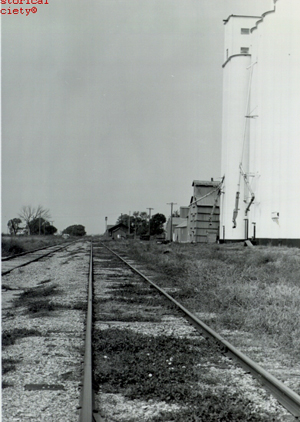 At the railroad depot in Helena
(11862, Fred Huston Collection, OHS).

Located at the junction of State Highway 45 and State Highway 58, approximately sixteen miles south-southeast of Cherokee, the county seat, and six miles west of Goltry, Helena is a small, incorporated town in the southeastern corner of Alfalfa County. Since the arrival of non-Indian settlers in September 1893, wheat farming has comprised the primary local economic activity. Alfalfa County was created from Woods County in 1907.

Soon after the Cherokee Outlet opened, dispersed communities began to emerge in southwestern Woods County. A postal designation was received by Helen S. Monroe for Helena in June 1894. About four miles to the southwest a settlement called Carwile coalesced. When the Arkansas Valley and Western Railway surveyed its route through the region, it bypassed Carwile and approached Helena. Several business enterprises moved nearer the proposed railway, where, circa 1896, H. H. Anderson had opened a store on John Neal's homestead. In 1902 the Northwestern Townsite Company, E. S. Wilhite, agent and former Carwile merchant, bought Neal's land, laid out the town about one-half mile from the existing store and post office, and in 1903 held a lot sale. A bank, the first enterprise to move from Carwile, opened in April 1903 and became the Helena State Bank. Soon, according to one observer, "almost the entire town of Carwile folded their tents and journeyed to the townsite of Helena" in August. In December 1903 voters chose to incorporate the village of 160 souls. On January 6, 1904, the Arkansas Valley and Western Railway (part of the St. Louis and San Francisco Railway system) trackage reached Helena, and the line reached Carmen that year.

By mid-1905 an estimated seven hundred residents supported two banks, two schools, and two newspapers. Farmers accessed four elevators, a flour mill, and two lumberyards. The census at 1907 statehood credited Helena with 521 inhabitants, a number that jumped to 760 in 1910. A portrait of Helena in 1909 would reveal Baptist, Christian, Methodist, and Presbyterian churches, two banks, and three dozen prosperous businesses and service providers. The Woods County High School, one of only two in Oklahoma Territory at that time, occupied a $90,000 building constructed in 1903 and opened in 1904 for four hundred students. In 1910 the building became the campus of Connell State School of Agriculture, but in 1918 the state gave the building to the city for a public school. Helena's population hovered between six and seven hundred for the first four decades of the twentieth century, peaking in 1940 at 776. The Helena Free Press, the Helena Herald, and most recently the Helena Star have printed the news.

State government institutions have always bolstered the town's income. The Western Oklahoma State School for White Children, an orphanage, occupied the former high school building from 1923 through 1944. From 1945 to 1948 and from 1956 through mid-1982 the State Training School for Boys operated on the property, which adjoins Helena at the west corporate limits. Reconfigured in July 1982 as James Crabtree Correctional Center, a medium-security prison, the complex has housed more than eight hundred adult men offenders and continued in that function at the end of the twentieth century. In the 1990s the facility operated a farm and also maintained a quail hatchery for the Oklahoma Department of Wildlife Conservation. During the 1990s the prison's wild horse training program annually brought mustang owners and buyers to Helena.

While other Alfalfa County towns lost railroad access in the 1930s and 1950s, Helena remained on the line of the Burlington-Northern Santa Fe Railway, successor to the Frisco. Nevertheless, the community experienced some of the decline typical of rural small towns of northwestern Oklahoma. Oil prospecting in the 1930s opened a small field that has continued to produce. The population peaked in 1940 at 776. During the 1940s and 1950s a bank and two dozen retail and wholesale businesses operated. After the state school relocated, the population dropped to 580 in 1960, but its return prompted an increase to 769 in 1970 and to 710 in 1980. The advent of the prison complex boosted the count to 1,043 inhabitants in 1990. The consolidated Timberlake School District, serving 340 students from a wide geographical area in the corner of the county, placed its high school and one elementary school in Helena.

In the mid-1990s residents operated two dozen retail businesses and a bank and attended five churches. Agriculture supported a Farmers' Co-Op Association elevator. Living only twenty-six miles from Enid, some residents could commute to jobs there. Helena entered the twenty-first century with a population of 443 and in 2010 had 1,403 living there.

The following (as per The Chicago Manual of Style, 17th edition) is the preferred citation for articles:
Dianna Everett, “Helena,” The Encyclopedia of Oklahoma History and Culture, https://www.okhistory.org/publications/enc/entry.php?entry=HE011.