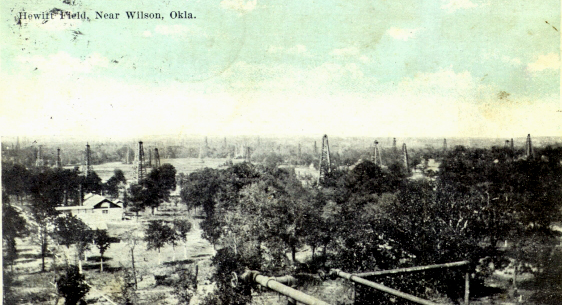 The Hewitt Field developed during the early 1920s. Its discovery came just in time to bolster Oklahoma oil production, which was about to fall behind other states in total output. The discovery well for the field was completed on June 5, 1919, in Carter County in southern Oklahoma about fifteen miles west of Ardmore and only four miles east of the prolific Healdton Field. The well, the Texas Company's Number One A. E. Denny, was completed in an oil sand at a depth of 2,084 feet for an initial flow of 410 barrels per day. A period of rapid development caused the field to reach its peak annual production of more than thirteen million barrels from 605 wells in 1921. By 1927 the field had expanded to an area covering 3,050 acres, in which slightly more than eight hundred wells had produced more than sixty million barrels of oil, a rate averaging 19,786 barrels per acre. This was a respectable record but not nearly as impressive as that of the neighboring Healdton Field.

In the Hewitt Field most petroleum comes from a number of producing horizons at depths ranging from twenty-one hundred to thirty-one hundred feet. The primary structure, consisting of two large anticlinal domes connected by a saddle, was first identified as a possible source by William J. Millard in October 1916. The Hewitt claims the distinction of being the second-largest field in southern Oklahoma. Carter Oil Company's Number Thirty-three Noble began to flow in May 1924 at 12,800 barrels per day, one of the largest initial flows ever recorded in the state.

The following (as per The Chicago Manual of Style, 17th edition) is the preferred citation for articles:
Bobby D. Weaver, “Hewitt Field,” The Encyclopedia of Oklahoma History and Culture, https://www.okhistory.org/publications/enc/entry.php?entry=HE020.