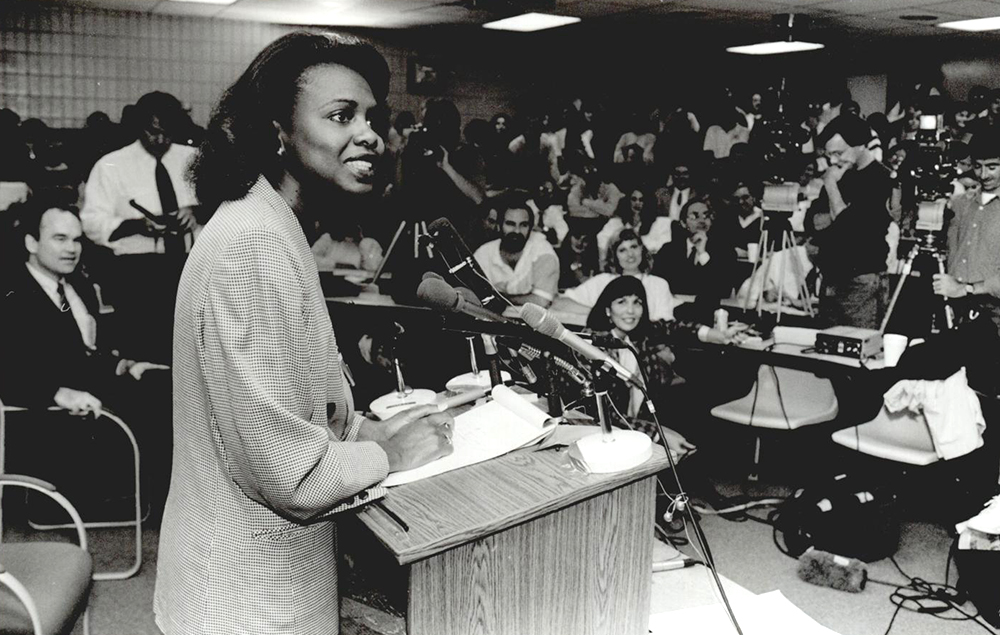 Author, educator, and attorney Anita F. Hill was born in Morris, Oklahoma, on July 30, 1956. She was one of thirteen children born to Albert and Irma Hill, who farmed in the Okmulgee County area. Her parents set high moral standards for her, and she was reared in the Baptist faith. Academically gifted, Hill graduated as valedictorian from Morris High School in 1973. A National Merit Scholar, she attended Oklahoma State University and earned a bachelor's degree in psychology in 1977. She enrolled in the Yale University Law School, obtaining a doctorate in jurisprudence in 1980.

After graduating from Yale, Hill taught civil rights, contracts, and commercial law at Oral Roberts University, the University of Oklahoma, and the University of California at Berkeley. She became a national figure in 1991 when she accused U.S. Supreme Court nominee Clarence Thomas of sexual harassment during her tenure at the U.S. Department of Education and the Equal Employment Opportunity Commission. Hill's accusation resulted in her testimony before the Senate Judiciary Committee. Although Thomas narrowly received Senate confirmation and appointment as an associate justice to the Supreme Court, Hill had placed the issue of sexual harassment in the national spotlight.

By the beginning of the twenty-first century Hill had become a highly sought after lecturer, traveling internationally and speaking on racial and gender issues in the workplace. She had appeared on national programs, including 60 Minutes and Face the Nation. Her publications have included articles regarding Civil Rights issues in Newsweek andthe New York Times. Moreover, she had authored Speaking Truth to Power and served as the co-editor of Race, Gender, and Power in America: The Legacy of the Hill-Thomas Hearings. Hill's recognition has included being awarded the Ray and Marian Vestor Lectureship at Linfield College, the Carlsen Lecture at the University of Minnesota, the William O. Douglas Lectureship at Gonzaga Law School, and the Dean's Lecture at Yale University Law School.

The following (as per The Chicago Manual of Style, 17th edition) is the preferred citation for articles:
Connie G. Armstrong, “Hill, Anita F.,” The Encyclopedia of Oklahoma History and Culture, https://www.okhistory.org/publications/enc/entry.php?entry=HI005.