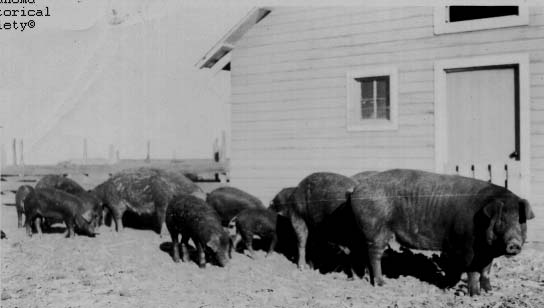 Hogs have been an agricultural resource in Oklahoma since the 1830s. The Choctaw brought with them semiferal hogs during the tribe's removal to Indian Territory. This breed is now nearly extinct, though other feral hogs do live in Oklahoma. White settlers brought domestic hogs after the separation of Oklahoma Territory from Indian Territory and the opening to settlement in the 1890s. By the beginning of the twentieth century census figures showed 1,253,133 domestic hogs in present Oklahoma. In 1900, 73 percent of all Oklahoma farms had hogs (compared to 75.5 percent of U.S. farms), averaging 15.9 hogs per farm.

Following World War II Oklahoma's swine population slowly declined to 407,059 in 1954. In that year 37 percent of all farms had hogs, with 9.3 hogs as the average per farm. At that time Oklahoma was ranked twenty-first in the United States and had .7 percent of the nation's total hog population. A lack of consistent corn production in the state was the main reason for decreased production. The distribution of hogs in the 1960s changed, and the two counties with the most hogs were Canadian and Grady, both in the central Oklahoma. Total production was dwindling and was scattered over Oklahoma.

By 1992 production was increasing, with 260,682 hogs on 3,415 farms, averaging 76 hogs per farm. Oklahoma ranked twenty-fourth in the nation. In 1991 a new state law allowed foreign and corporate ownership of land. This was followed in pursuing years by "right to farm" laws facilitating corporate hog farm growth. The hog industry began to consolidate and grow rapidly after 1995. This shift was also due to improved access to water via the mining of the Ogallala Aquifer, greater access to grain, sparse population, and proximity to the West Coast for pork exports.

From 1992 to 1997 the hog inventory increased to 1,689,700, more than 600 percent. It continued to increase about 200,000 hogs per year, so that in 2001 Oklahoma had 2,480,000 hogs. In addition to the change in inventory was a change in the size of operations. In 1993 the smallest operations, those with fewer than 99 head, were 15 percent of inventory, with 40 percent having more than 5,000. In 2001 only 1.5 percent of operations had fewer than 99, and 86 percent of operations had more than 5,000. Counties previously unimportant in hog production became centers of the activity. Texas County's inventory grew from 13,500 hogs on thirty-nine farms in 1992 to 907,000 in 1997, rising from the nation's 797th county to its third. In 1995 Texas County became home to Seaboard Farms' hog-processing plant, which had a slaughter capacity of 16,000 head per day. Hog production also increased in Woodward County, just east of the Panhandle where Murphy Farms operated, and in Hughes County, in south-central Oklahoma, home to Tyson's Pork Group.

In 2001 hogs were second to cattle as the highest agricultural producer in Oklahoma, and production ranked eighth in the nation. There were twenty-seven hundred hog farms averaging 918 pigs per farms. Pigs per litter were slightly better than the national average at 8.85 per litter. Average live weight was 280 pounds. In December 2002 Oklahoma's hog inventory was estimated at 2,490,000 head, and Oklahoma remained ranked eighth nationally. In 2002 Tyson decided to close their largely contract operations in Hughes County due to transportation difficulties. Seaboard Farms owns and continues to raise hogs in the Panhandle region despite numerous controversies and environmental issues.

Chris Mayda, "Passion on the Plains: Pigs on the Panhandle" (Ph.D. diss., University of Southern California, 1998).

The following (as per The Chicago Manual of Style, 17th edition) is the preferred citation for articles:
Chris Mayda, “Hog Industry,” The Encyclopedia of Oklahoma History and Culture, https://www.okhistory.org/publications/enc/entry.php?entry=HO006.