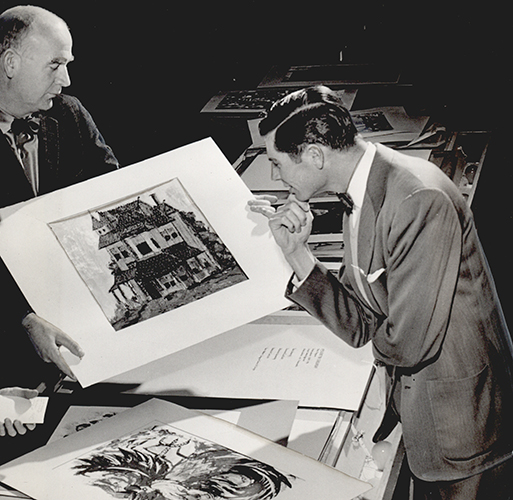 An artist and a teacher, Alexandre Hogue was born in Memphis, Missouri, on February 22, 1898, and grew up in Denton, Texas. After graduating from high school in Dallas, he attended the Minneapolis College of Art and Design and later worked as a commercial artist in New York City. In 1925 he returned to Dallas to devote himself to painting and for several years made annual sketching trips to the Davis Mountains and Big Bend country of Texas or to Taos, New Mexico, which he first visited in 1920. His painting Studio Corner, Taos was exhibited at the National Academy of Design in 1928. The following year he mounted his first solo exhibition at the Museum of Fine Arts in Houston.

In 1931 Hogue began teaching life drawing at the Texas State College for Women in Denton, continuing as an instructor until 1942. Meanwhile, he received national attention for his "dust bowl landscapes" depicting the effects of the drought that devastated the Great Plains during the 1930s. He later produced a much publicized water erosion series and in 1937 an oil industry series for Fortune magazine. Meanwhile, he became head of the art department at Hockaday Junior College in Dallas. In 1938 he married Maggie Jo Watson, with whom he had a daughter, Olivia.

During World War II Hogue worked as a technical illustrator for North American Aviation in Dallas. In 1945 he moved to Oklahoma following his appointment as head of the art department at the University of Tulsa, a post he held for the next eighteen years. After stepping down as department head in 1963, he continued to teach drawing, painting, and lithography at the university until 1968 when he retired to a farm and studio near Tulsa. In 1980 in Oklahoma City he accepted the Oklahoma Arts Award for Lifetime Service from Gov. George Nigh.

The following (as per The Chicago Manual of Style, 17th edition) is the preferred citation for articles:
David C. Hunt, “Hogue, Alexandre,” The Encyclopedia of Oklahoma History and Culture, https://www.okhistory.org/publications/enc/entry.php?entry=HO008.