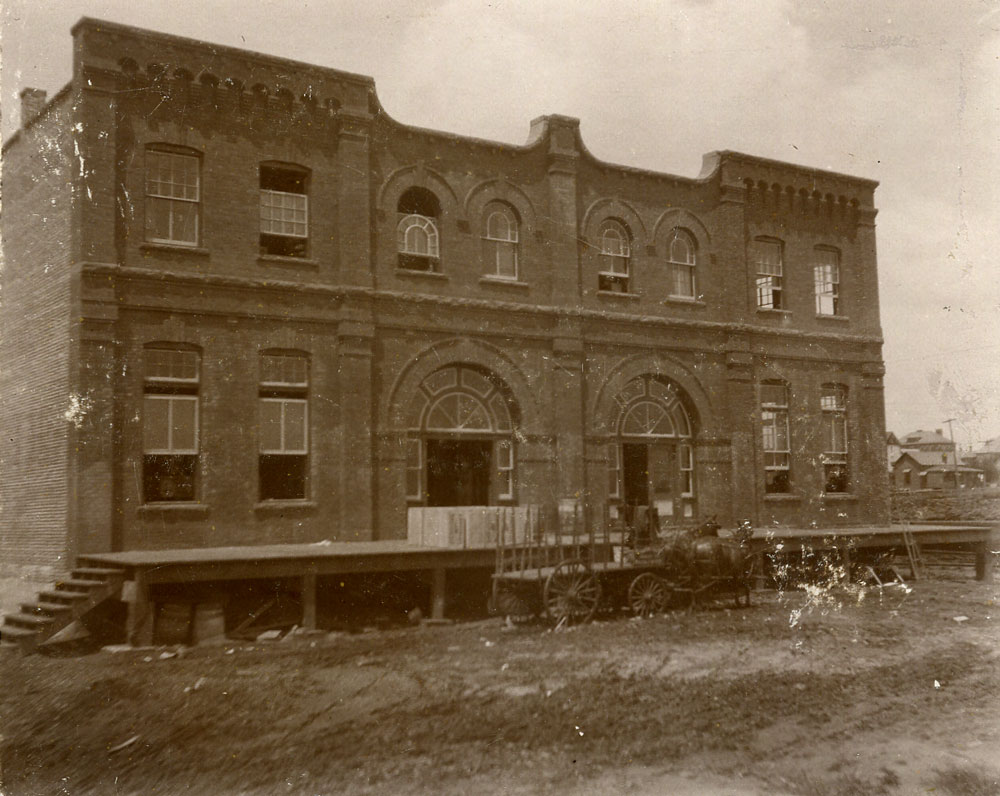 Located in Harmon County in extreme southwest Oklahoma, Hollis, seat of Harmon County, is situated thirty-five miles west of Altus on U.S. Highway 62 and thirty-seven miles south of Interstate 40 on State Highway 30, and at the intersection of those two arteries. Hollis was platted in 1898 in Old Greer County by townsite company members George W. Hollis, William L. Hollis, Dr. J. E. Jones, Dr. W. C. Pendergraft, and Rufus Connella. They had roughly drawn a plat on a the lid of a shoe box, and lot sales were recorded at the Old Greer County seat in Mangum, Oklahoma Territory. The lid was lost; a lawsuit filed in district court negated the original plat. Therefore, a new one was drawn up February 18, 1903, and duly filed in Mangum. The Hollis family, from Ellis County, Texas, had arrived at the property site during a blizzard in November 1898. After the snow melted, they built a half-dugout and opened a general merchandise store. That store and Jim Prock's blacksmith shop formed the original Hollis business section. The post office was established on October 31, 1901, and named for George W. Hollis. At 1907 statehood Hollis had 524 residents.

The town continued to be in Greer County until 1909. In that year a proclamation by Gov. Charles N. Haskell divided Greer into Greer and Harmon counties. An election pitted Hollis against Dryden, Looney, and Vinson, but citizens selected Hollis as the seat of their county government. In 1910 the Altus, Wichita Falls and Hollis Railway (later the Missouri, Kansas and Texas Railway) connected the community with outside markets. The Harmon County Courthouse, built in 1926, is listed in the National Register of Historic Places (NR 84003031). The town's population stood at 964 in 1910, 2,914 in 1930, and 3,089 in 1960.

Agriculture has been Hollis's major economic base. Using the rich soil, farmers have grown cotton, wheat, and peanuts, and raised livestock. Nonagricultural rural areas abound in wildlife, especially deer, turkey and quail, and hunting has been popular. Into the twentieth century local businesses remained involved in the agriculture industry. The Hollis Cotton Oil Mill processed cattle feed from cottonseed meal and distributed feed and flaked corn to several states. Hollis Commission, a livestock auction, drew customers within a one-hundred-twenty-mile radius. The Harmon County Dairy was established in 2002 by a group of local citizens, and comprising twenty-five hundred head of dairy cattle, produced 140,000 pounds of milk daily with distribution by the Dairy Farmers of America Corporation. Other industries included Western Fibers, an insulation manufacturing plant with a customer base in the United States and Canada, and Buck Creek Mesquite, processor of mesquite wood logs for grilling.

Population peaked at 3,150 in 1970, and the census counted 2,958 Hollis residents in 1980. At the turn of the twenty-first century the Hollis News kept 2,264 residents informed. The 2010 census tallied a population of 2,060. The Hollis Golf and Country Club, with a nine-hole golf course, was under construction north of town. The Harmon County Historical Museum, located at 102 West Broadway, displayed artifacts relating to local history. Hollis had a council-manager form of government.

The following (as per The Chicago Manual of Style, 17th edition) is the preferred citation for articles:
Sylvia Hudson and Zen Stinchcomb, “Hollis,” The Encyclopedia of Oklahoma History and Culture, https://www.okhistory.org/publications/enc/entry.php?entry=HO014.