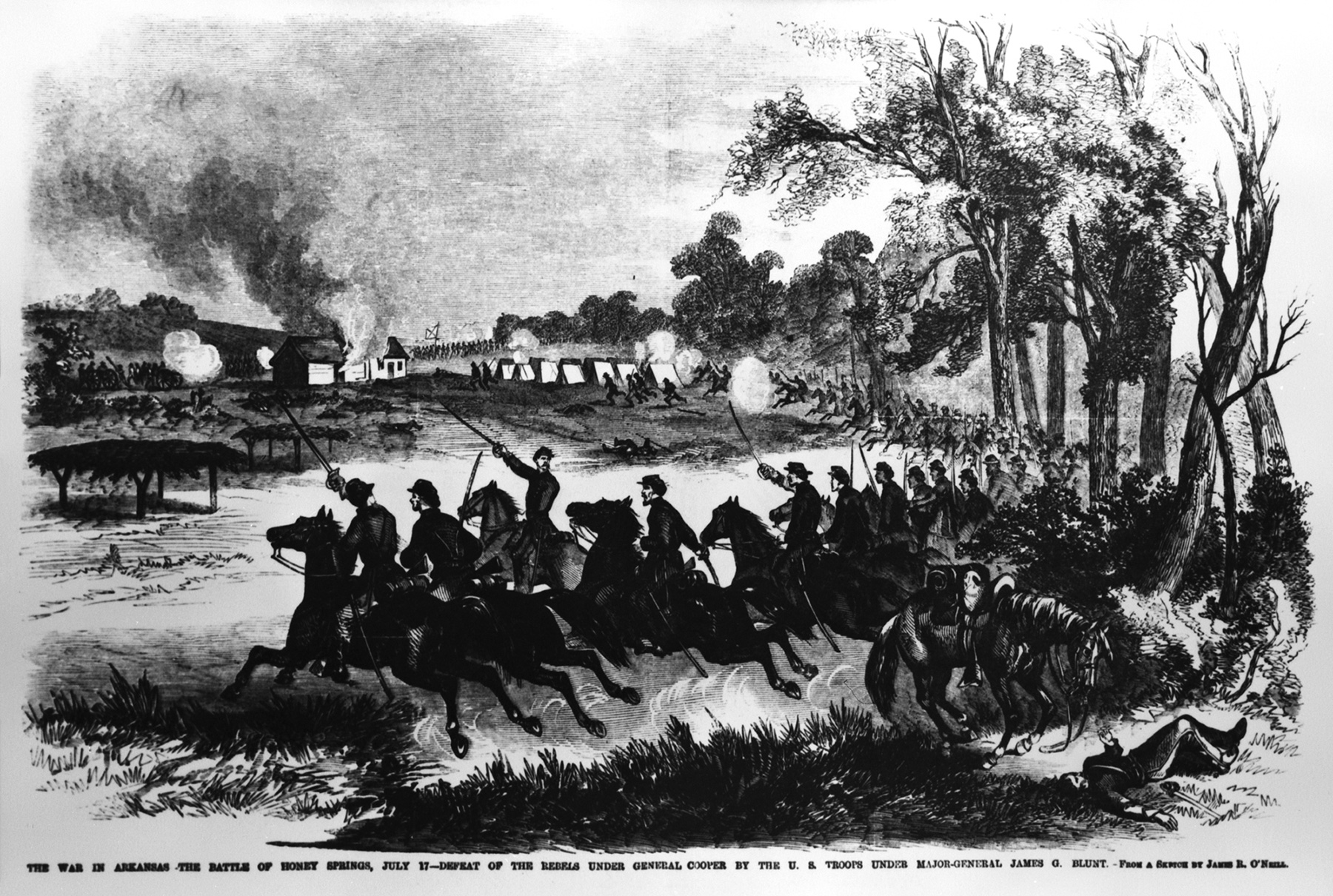 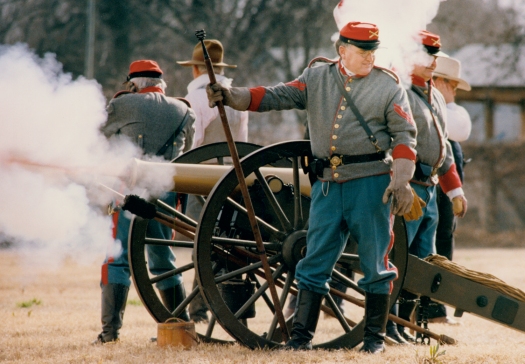 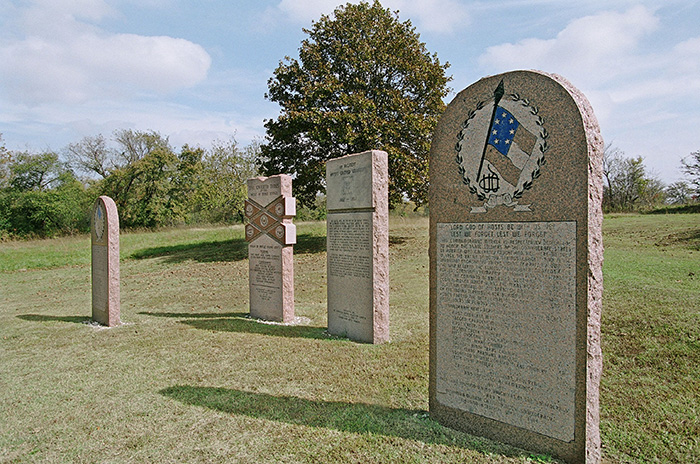 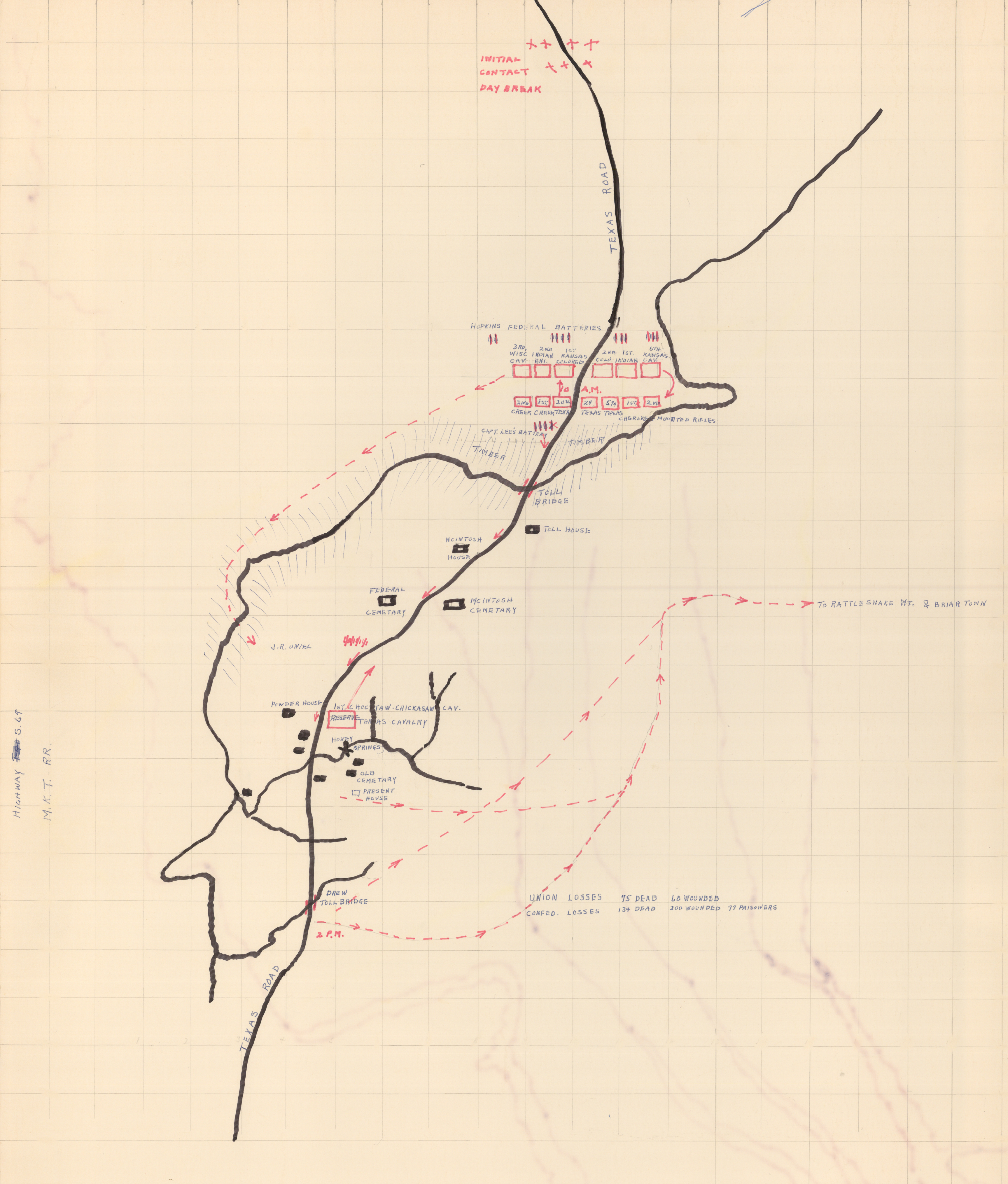 The engagement at Honey Springs (by definition an engagement, rather than a battle) was the pivot point of the Civil War in Indian Territory and is the largest military clash ever to have occurred in Oklahoma. Also known as "the affair at Elk Creek," it happened on July 17, 1863, between United States units under Maj. Gen. James G. Blunt and Confederate States of America troops commanded by Brig. Gen. Douglas H. Cooper.

Federal reports place twenty-eight hundred Union troops and six thousand Confederates at Honey Springs. Later research estimates the Southern force between thirty-four hundred and fifty-one hundred, not all of whom were physically capable and equipped to fight. These consisted of the Twentieth and Twenty-ninth Texas Cavalry, the Fifth Texas Partisan Rangers, Lee's Light Battery of Texas Artillery, the First and Second Cherokee Mounted Rifles, the First and Second Creek Mounted Rifles, and the First Choctaw and Chickasaw Regiment of Mounted Rifles.

Honey Springs, a well-known place to rest and get water along the Texas Road, was the location of a Confederate commissary depot. Cooper gathered his troops there following the first engagement at Cabin Creek (July 1 and 2). At Honey Springs Cooper awaited three thousand troops under Brig. Gen. James Cabell from Fort Smith, together with which he planned to attack the Union Indian Brigade at Fort Gibson.

Meanwhile, Fort Gibson was reinforced by Blunt and a division of his Army of the Frontier. Blunt decided to strike Cooper's force before Cabell arrived and, after crossing the rain-swollen Arkansas River, began his march at eleven o'clock on the night of July 16. Near Chimney Rock, a landmark west of present Summit, Oklahoma, the Union troops routed a Confederate picket. In the early morning they engaged a reconnaissance party intending to block the Texas Road five miles north of Elk Creek. Finally, just before eight o'clock on the morning of July 17, Blunt ordered his men to halt and eat. He then rode to the top of a rise to scout the enemy line, which was hidden in the trees north of Elk Creek.

After resting his men, Blunt formed his troops into two brigades under Col. William A. Phillips on the left and Col. William R. Judson on the right. Phillips's Brigade consisted of a battalion of the Sixth Kansas Cavalry, the First and Third Regiments of Indian Home Guards, a battalion of the Second Colorado Infantry, and Capt. Henry Hopkins's (four-gun) battery of Kansas Artillery, plus two guns of Capt. Edward A. Smith's battery attached to the cavalry. Judson's Brigade included a battalion of the Third Wisconsin Cavalry, the Second Regiment of Indian Home Guards, and the First Kansas Colored Infantry, and the remainder of Smith's battery of Kansas Artillery. They quick-marched a quarter-mile down the road and then spread out in front of the Confederate center.

The fight began with an artillery duel. Each side lost one gun, but as the Confederates had started with only four, the advantage belonged to the Federals. Ordered to advance, the First Kansas Infantry marched to within sixty paces of the Confederate line, standing on open ground while the Southerners were hidden in the forest of trees and underbrush. When the regimental commander ordered his men to fire, both sides simultaneously responded.

The Confederates withstood the fusillade and counterattacked, and in the action their flag bearer was shot. As they retreated, they retrieved the fallen regimental banner, but a second counterattack also failed, again with the flag bearer killed and the standard recovered. Then, as black-powder smoke filled the air, the Second Regiment of Indian Home Guards entered the First Kansas Infantry's line of fire. When Union commanders ordered the troops to pull back, the Confederates thought the enemy was retreating. The dismounted Texas cavalrymen charged into the reset Union line and met withering crossfire from the front and side. One Confederate wrote, "We entered the battle with 360 men and came out with 105," and in the confusion the colors of the Twenty-ninth Texas Cavalry were lost. General Cooper reported afterward that he had sent a rider to Col. Daniel N. McIntosh's two Creek regiments, which were guarding Elk Creek's upper fords, to order them to support the Texans' left, but the messenger never got through.

Reforming battle lines several times in their retreat across Elk Creek, the Confederates stalled the Federal advance through hand-to-hand combat. Half a mile south of the creek the First Choctaw and Chickasaw Regiment checked the Federals long enough for their wagon train to evacuate some supplies. They then set fire to what remained, keeping it out of enemy hands.

The Confederates withdrew to North Fork Town. After a day's rest the Federal troops returned to Fort Gibson. As a result of the battle the Confederates no longer controlled Indian Territory north of the Arkansas River, and a route to Fort Smith, Arkansas, was opened to the Federal army. General Blunt reported seventeen Union troops killed and sixty wounded. His soldiers buried 150 Confederate dead and took seventy-seven prisoners. Four hundred Confederates were listed as wounded.

The Honey Springs Battlefield Historic Site, located east of U.S. Highway 69 between Oktaha and Rentiesville, is administered by the Oklahoma Historical Society, which sponsors a battle reenactment. The site is listed in the National Register of Historic Places (NR 70000848) and was designated a National Historic Landmark in 2013.

Whit Edwards, "The Prairie was on Fire": Eyewitness Accounts of the Civil War in the Indian Territory (Oklahoma City: Oklahoma Historical Society, 2001).

The following (as per The Chicago Manual of Style, 17th edition) is the preferred citation for articles:
Ralph Jones, “Honey Springs, Battle of,” The Encyclopedia of Oklahoma History and Culture, https://www.okhistory.org/publications/enc/entry.php?entry=HO025.