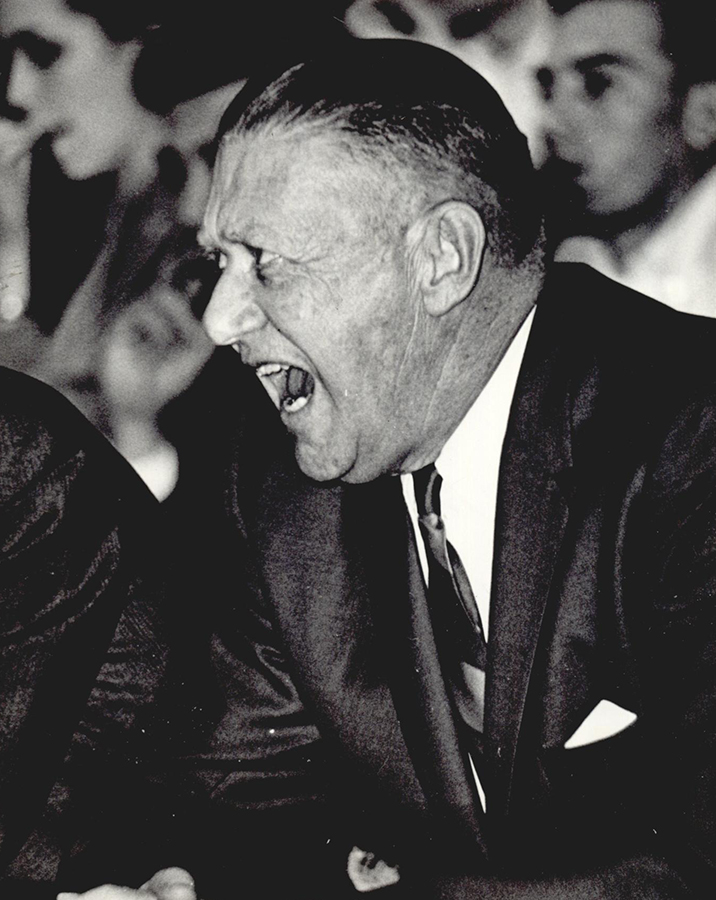 For more than four decades Henry P. "Hank" Iba reigned as the Iron Duke of Defense in college basketball, including thirty-six years at Oklahoma State University (formerly Oklahoma A&M). He led Oklahoma A&M to National College Athletic Association championships in 1945 and 1946, and he directed the U.S. Olympic team to two gold medals in 1964 and 1968 and one silver medal in 1972.

His A&M–OSU teams won 655 games and lost 316 for a .675 percentage. He also coached A&M baseball until 1941 with a 90–41 record for a .687 percentage, and he assumed the role of athletic director less than a year after arriving on campus. His basketball teams were known for their tough, man-for-man defenses and for the "Iba deep freeze" in the final minutes of close games, but he adjusted to major changes such as the jump shot and bonus free throws.

Iba, born in Easton, Missouri, on August 6, 1904, started his basketball-coaching career at Oklahoma City Classen High School. His team, the Comets, earned a 51–5 record in two years and won the state championship in 1928–29. He led Maryville Teachers College in Missouri to a 101–14 record before coaching at the University of Colorado for one year and then moving to Oklahoma A&M in 1935. Overall, his teams won 767 college games.

His 1945–46 NCAA champions were led by Bob Kurland, the game's first seven-foot-tall player. They beat New York University in the 1945 finals and the University of North Carolina in the 1946 finals. He was voted coach of the year in both seasons. His 1945 champions also defeated the National Invitational Tournament champion, DePaul University, and six-foot, nine-inch center George Mikan in a classic Red Cross Benefit game.

The following (as per The Chicago Manual of Style, 17th edition) is the preferred citation for articles:
Max Nichols, “Iba, Henry Payne,” The Encyclopedia of Oklahoma History and Culture, https://www.okhistory.org/publications/enc/entry.php?entry=IB007.