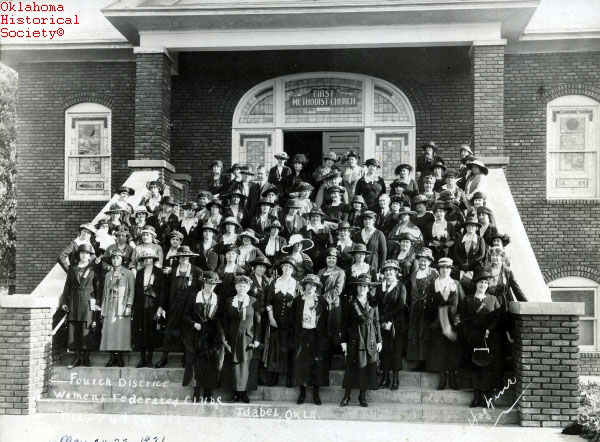 The town that would later be called Idabel was established in 1902 as Purnell when the Choctaw Townsite Commission selected, surveyed, and platted the site on the Arkansas and Choctaw Railway (later the St. Louis and San Francisco Railway, or Frisco), then being constructed across the southern portion of the Choctaw Nation, Indian Territory. The Post Office Department rejected the name Purnell for a proposed office at the site because of the similarity to Purcell, the name of an existing town in Oklahoma Territory. Instead, a post office was authorized as Bokhoma (Red River in the Choctaw language), effective December 15, 1902.

The town's name of Purnell was derived from the family name of Isaac Purnell, a railroad official. When postal officials rejected that designation, the name was changed to Mitchell, honoring another railroad company officer. That name was also rejected because another town of that name existed elsewhere in the territory. Railroad officials then chose the name Idabel, a compound of the names of Isaac Purnell's two daughters, Ida and Bell (sometimes given as Belle). The Post Office Department followed suit by changing the name from Bokhoma to Idabel, effective February 3, 1904.

The town was sited on the divide between the Little and Red rivers, twenty-one miles west of the state boundary with Arkansas, forty miles east of Hugo, county seat of Choctaw County. Later, U.S. Highways 70 and 259 would intersect at Idabel. In the beginning, the settlement was a crude, frontier village of wood-frame structures on an eighty-nine-acre site in the dense forest astride the newly built railroad. Growth and development were very slow during the first three years. An unofficial census in 1905 found approximately four hundred people in ninety households. Stumps from the cleared forest on the site still dotted the main streets of the business district.

The years 1908 to 1920 were a time of expansion. Only one brick building stood in the business district in 1907, but by 1920 most of the wood-frame buildings had been replaced. The residential portions of the original plat filled, and two major additions were platted and opened. An impressive brick railroad station replaced the original wood-frame building, and a three-story, brick county courthouse was built. Three brick school buildings were constructed, and two congregations replaced their former wood-frame places of worship with churches of brick.

For the first several years timber, harvested from virgin forests in the trade territory, underpinned the economy. The raw materials were shipped by railroad to other localities for processing and use. As farm families cleared and occupied more land, the cultivation of cotton expanded, and the crop became the town's primary economic base. A single cotton gin operated in 1904, and by the 1930s six were in business.

The worldwide economic depression of the 1930s led to collapse of the cotton market. Depleted soil and destructive pests also reduced cotton production, and by mid-century little or none was being produced in the region. Farmers converted croplands to pastures, and the beef cattle industry expanded. Chicken production also later became an economic factor. Marginal lands, formerly farmed, were turned into pine plantations. Industrialization came slowly to Idabel, and much of that early industry consisted of wood-processing plants. By the 1990s these and related activities had developed significantly, and other industrial operations had joined the economic mix.

For the first four years of its existence Idabel had no local government. Law enforcement was a responsibility of the then-sovereign Choctaw Nation for tribe members. The U.S. government held jurisdiction over all other residents until Oklahoma became a state in 1907. Idabel's citizens elected their first municipal officers in 1906, and the council-mayor form of government has continued. From the original plat of 89.39 acres in 1902, the city area gradually expanded through additions and annexations to several square miles, although all is not yet inhabited. Idabel properties listed in the National Register of Historic Places include the Barnes-Stevenson House (NR 78003083), the Spaulding-Olive House (NR 79003138), the Frisco Station (NR 79003137), the Rouleau Hotel (NR 02000974), and the National Guard Armory (NR 88001409).

The following (as per The Chicago Manual of Style, 17th edition) is the preferred citation for articles:
Louis Coleman, “Idabel,” The Encyclopedia of Oklahoma History and Culture, https://www.okhistory.org/publications/enc/entry.php?entry=ID002.