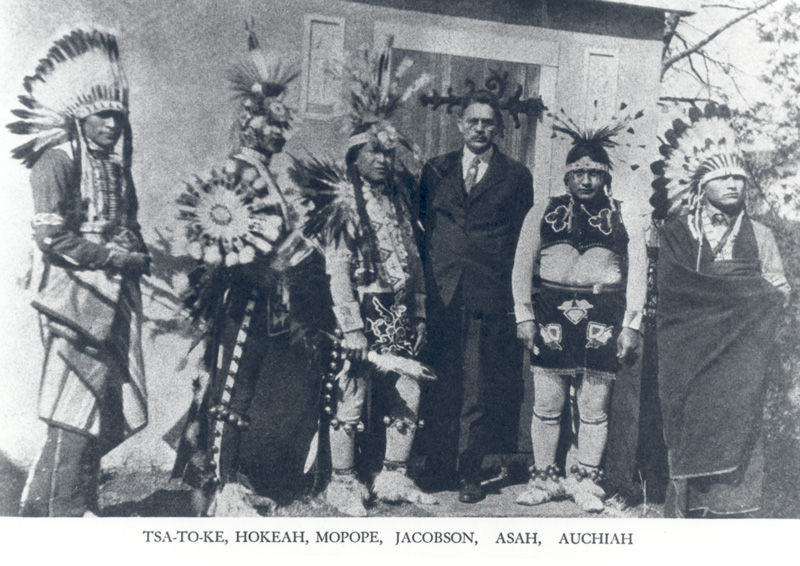 Oscar Brousse Jacobson was born on May 16, 1882, in Westervik, Kalmar Lan, Sweden. He emigrated to Lindsborg, Kansas, in 1890 and studied at Bethany College, receiving a bachelor's degree in 1908. He continued his studies at the Louvre in Paris, in Sweden, and in Denmark. In 1916 he received a master of fine arts degree at Yale University and in 1941 a doctorate of fine arts from Bethany College in Lindsborg. He worked as director of the School of Art at the University of Oklahoma (OU) from 1915 until 1954. He and his wife, Jeanne d'Ucel, had three children, Yvonne, Oscar, Jr., and Yolanda.

Jacobson's name is synonymous with early-twentieth-century art in Oklahoma. Educated in Europe and America, he tirelessly promoted all arts to the young state. One genre, traditional Plains Indian art, is now inexorably bound to him and to the University of Oklahoma. Because Jacobson held Indian people in good regard and treated them with respect, he became their champion and mentor. In the late 1920s he and professor Edith Mahier, also of the OU art school, worked with a small group of five Kiowa men and briefly with one Kiowa woman. These artists and their style became world famous and have always been associated with Oscar B. Jacobson. In addition, he founded the Association of Oklahoma Artists and formally advised the Works Progress Administration's Federal Art Project for Oklahoma in the 1930s.

A prolific painter of Southwestern landscapes, Jacobson exhibited his work throughout the United States and Europe. He won numerous awards, including a Gold Medal at the 1931 Mid-Western Exhibition at the Kansas City Art Institute Invitational. He was made an honorary chief of the Kiowa tribe and was inducted into the Oklahoma Hall of Fame in 1949. He lectured at the Metropolitan Museum of Art in New York, at the Chicago Art Institute, and at more than fifty universities and colleges. His works are held by the Woolaroc Museum at Bartlesville, Oklahoma, the Jacobson Gallery in Norman, the Oklahoma City Museum of Art, and the Fred Jones Jr. Museum of Art in Norman. On September 15, 1966, he died in Norman.

The following (as per The Chicago Manual of Style, 17th edition) is the preferred citation for articles:
Mary Jo Watson, “Jacobson, Oscar Brousse,” The Encyclopedia of Oklahoma History and Culture, https://www.okhistory.org/publications/enc/entry.php?entry=JA003.