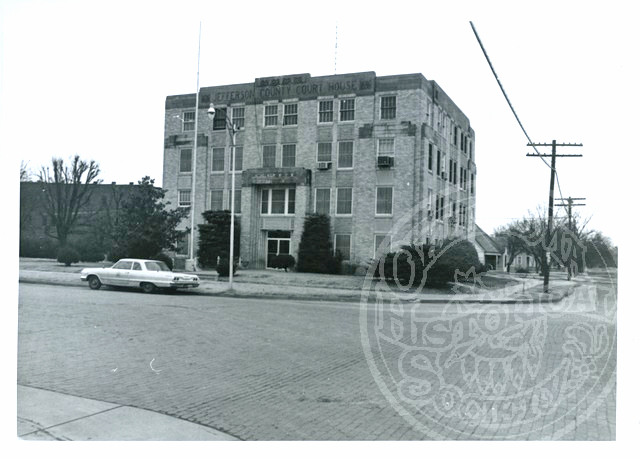 Situated in southern Oklahoma, Jefferson County is bordered on the south by the Red River and Texas, with Cotton County on the west, Stephens County on the north, and Carter and Love counties on the east. Created at 1907 statehood, the 733.83-square-mile county was named to honor U.S. Pres. Thomas Jefferson. The incorporated towns are Addington, Cornish, Hastings, Ringling, Ryan, Sugden, Terral, and Waurika (the county seat).

The county lies in the Redbed Plains physiographic region, a subregion of the Osage Plains. The terrain is mainly flat or rolling prairie. Beaver and Mud creeks and their smaller tributaries drain the county into the Red River. In 1971 the U.S. Army Corps of Engineers began construction on the Waurika Dam on Beaver Creek, creating Waurika Lake in northwestern Jefferson, southwestern Stephens, and western Cotton counties.

Archaeologists have concentrated on the Plains Village period (A.D. 1000 to 1500), reporting forty-two sites in the county at the beginning of the twenty-first century.

In the eighteenth century, probably pressured by the Osage, Wichita groups migrated from the Arkansas River Valley to the Red River in the present Jefferson County region. Here, they inhabited two communities, one on each side of the river, called the Twin Villages, or San Bernardo and San Theodoro. In 1759 Spanish forces under the command of Col. Diego Ortiz Parrilla attacked these villages in retaliation for the destruction of a Spanish mission in Texas. The northern bank held a heavily fortified palisade with a French flag visible. The Wichita bands forced the Spanish to withdraw, abandoning most of their supplies and two cannons. Archaeologists believe that they have found these villages, first excavating the site (called the Longest Site for the property owners) in 1965–66. The San Bernardo (Taovayas Village) Site is listed in the National Register of Historic Places (NR 82003685).

European contact brought both the Spanish and French to the present county. The Great Spanish Road traversed the North Fork of the Red River and then followed the Red River east, through the Jefferson County area, to the mouth of the Washita River. Spanish traders used the route to connect its holdings in Louisiana Territory to Santa Fe, New Mexico. French trappers and traders also entered the region, bartering with the Wichita bands as documented by its flag and trade goods at the Twin Villages. The Wichita bands reportedly abandoned the Twin Villages at the beginning of the nineteenth century. The United States acquired the region in 1803 as part of the Louisiana Territory. In 1852 Randolph B. Marcy traversed the county when he left Fort Arbuckle to find the Red River's source.

More than two-thirds of Jefferson County resided in the Chickasaw Nation prior to statehood. In the late 1830s the Chickasaw began relocating to the Indian Territory, joining the Choctaw, who had acquired the land. In 1855 the Chickasaw separated from the Choctaw, creating an independent nation, with part of present Jefferson County area in the Chickasaw Nation's Pickens County. The western portion of the county emerged from the Kiowa-Comanche-Apache Reservation, created by the 1867 Medicine Lodge Treaty. This area opened for non-Indian settlement through a lottery system with the 1901 Kiowa-Comanche-Apache Opening.

After the Civil War (1861–65) the Chisholm Trail developed as a transportation artery for Texas cattlemen to drive their herds to railroad stockyards in Abilene, Kansas. There the beef was shipped east, bringing a hefty profit. From Red River Station on the Texas side, the trail crossed into present Jefferson County, and there drovers were served by the Fleetwood Store and further north by the Reid Store. The cowboys used Monument Hill as a guide, and in 1983 a granite marker commemorating the trail was erected there. In 1892 the Chicago, Rock Island and Pacific Railway (CRI&P) generally followed the old cattle trail, laying north-south tracks through the area. In 1901–02 the Enid and Anadarko Railway Company (conveyed to the CRI&P in 1903) constructed a line from Lawton to Waurika, connecting with the early CRI&P line. In 1923 the Wichita Falls and Oklahoma Railroad (leased to the Wichita Valley Railway) became the last line to be built in the county, laying an east-west line from the Texas border to Waurika. This short line was abandoned in 1942.

The 1898 Curtis Act stripped the Chickasaw Nation of governmental power. The allotment process, which provided for individual land ownership, paved the way for the Kiowa-Comanche-Apache Opening and Oklahoma statehood. In 1905 the Sequoyah Convention attempted to form a state from only Indian Territory, but failed. The 1906 Oklahoma Constitutional Convention created Jefferson County's borders. The convention designated Ryan as the county seat. Waurika and Sugden also vied for the title in a 1908 election, but no town received a majority. Waurika won a second election over Ryan, but the results were questioned in court. Finally, in 1912 Waurika successfully claimed the seat of government in a third vote.

Ranching has thrived in the region since the mid-nineteenth century. Prestatehood ranchers included Eli Calvin and Joseph "Ikard" Sugg, brothers who had a large ranch, J. S. Price, whose son Henry continued the ranch, George Wood Hinton, and Charley Beavers and Bill Edwards, who together owned the E-B Ranch. At 1907 statehood Jefferson County ranchers and farmers owned 22,937 milk and beef cows. By 1935 the county held 43,522 head, climbing to 56,000 in 1963. A county history written by J. M. Dyer circa Oklahoma's Semi-Centennial claimed that three-fourths of the county was used for ranching, and U.S. Highway 70 could be known as the "ranch highway," with most ranchers raising Hereford cattle. In 2000 the county had 75,000 head of cattle.

The county's business interests have been related to its agriculture. Every town had several cotton gins and cotton oil mills; in 1932 there were at least twenty-five in operation. A small portion of the Healdton Field protrudes into northeastern Jefferson County, and wildcatters drilled oil wells as early as 1913. Drillers explored three other oil and gas pools in the 1920s in southern Jefferson County. By 1930 the county had 12 producing gas wells and 118 producing oil wells. In 1975 the county produced 550,751 barrels of crude oil and 110,529 million cubic feet (mcf) of casinghead gas. In 1990 the number of barrels of oil dropped to 403,655, and casinghead gas dropped to 97,882 mcf, but 32,542 mcf of natural gas was produced. Commercial sand and gravel extraction also occurs, with 1,112,880 tons produced in 2002.

Agriculture and industry depend on the transportation routes that link the county's towns and villages. U.S. Highway 81, which parallels the former Chisholm Trail through the county, provides the main north-south artery. U.S. Highway 70 is the major east-west thoroughfare. State Highways include 5, 32, 79, and 89. The Union Pacific Railroad operates on the old north-south tracks laid by the CRI&P in 1892. The Wichita, Tillman and Jackson Railway uses the line between Walters and Waurika.

The Waurika vicinity is home to all of the county's properties that are in the National Register of Historic Places, except for the Twin Villages site. These are the First Presbyterian Church (NR 02000175), the Jefferson County Courthouse (NR 84003065), the Rock Island Passenger Station (NR 02000173), and the State Highway 79 Bridge (NR 96001518) across the Red River. From 1906 to 1912 the Hastings Baptist College operated in the town of Hastings. The school relocated to Mangum as the Southwest Baptist College. Waurika's Chisholm Trail Historical Museum, which disseminates the trail's regional and local history, and Waurika Lake are county attractions.

The following (as per The Chicago Manual of Style, 17th edition) is the preferred citation for articles:
Larry O'Dell, “Jefferson County,” The Encyclopedia of Oklahoma History and Culture, https://www.okhistory.org/publications/enc/entry.php?entry=JE001.