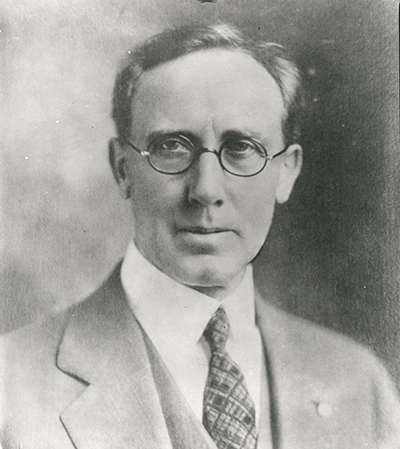 Born in Evansville, Indiana, December 30, 1867, Henry S. Johnston, future governor of Oklahoma, moved with his family to Kansas, and he graduated from Baker University in Baldwin City. After studying law in Colorado, he became a member of the Colorado bar in 1891. In 1893 he came to Oklahoma Territory to participate in the Cherokee Outlet opening. He settled in Perry and opened a law office.

Active as a lawyer and in political circles, Johnston was elected to the Oklahoma Territorial Council in 1896. After serving as Noble County attorney, he was elected to the 1906 Oklahoma Constitutional Convention. Selected as its presiding officer during the organizational phase, he wrote the initiative and referendum section of the Constitution. Elected to the first Oklahoma Senate, he served as its president pro tempore. Johnston married Ethel Littleton, one of the reporters for the new legislature. They adopted four children, Robin, Reba, Gertrude, and Nell.

Johnston twice ran unsuccessfully for Congress. Running as a Democrat and overcoming charges that he supported the Ku Klux Klan, he won the governor's race in 1926. Johnston was the first governor to open his inauguration with a prayer when he took office in January 1927. About twenty thousand people attended the inauguration, the first ever to be broadcast on radio and over loudspeakers to the festive crowd.

Governor Johnston pushed through the legislature bills to increase state education spending and to create a crippled children's hospital. He then fell out of grace with state legislators. The rift widened until the Oklahoma House of Representatives voted eleven articles of impeachment against him in January 1929. The Senate conducted the impeachment trial during February and March 1929. More than five thousand pages of voluminous testimony surrounded charges of illegally hiring state employees and of calling out the Oklahoma National Guard to prevent the body from meeting. The Senate found Johnston not guilty on ten charges but guilty of a single charge of general incompetence.

Johnston was the second Oklahoma governor to be removed from office through the impeachment process. He lived out his life in Perry, practicing law into his nineties. After he left the governor's office, he served in the state senate from 1933 to 1937. He died in Perry on January 7, 1965, one day after a proposal to soften his impeachment was introduced in the House.

The following (as per The Chicago Manual of Style, 17th edition) is the preferred citation for articles:
Bob Burke, “Johnston, Henry Simpson,” The Encyclopedia of Oklahoma History and Culture, https://www.okhistory.org/publications/enc/entry.php?entry=JO015.