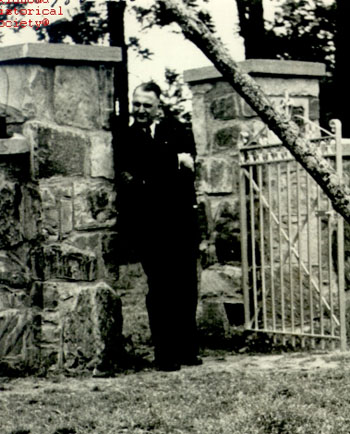 William S. Key, prominent Oklahoma entrepreneur, civic leader, and military officer, was born October 6, 1889, in Dudleyville, Alabama, the son of Callie R. and Hadassah Fargason Key. After finishing high school in Alabama in 1906, he joined the Georgia National Guard. Five years later he moved to Wewoka, Oklahoma, and established several businesses. On May 5, 1914, he married Irene Genevieve Davis of Wewoka, the daughter of George and Alice Brown Davis. Alice Brown served as the first woman chief of the Seminole (1922–35). The Keys had two sons and one daughter.

From 1924 to 1927 and also in 1935 Key served as warden of the Oklahoma State Penitentiary in McAlester. He was president of the Wardens Association of the United States in 1926. He chaired the Oklahoma Pardon and Parole Board from 1928 to 1932.

In 1927 the Keys moved to Oklahoma City and built a home at 600 Culbertson Drive in Lincoln Terrace near the Capitol. He established the Keyokla Oil Company and a real estate business in the Key Building located at Northwest Third and Harvey in Oklahoma City. He was a director of numerous businesses, including Security National Bank (1928–29), First National Bank and Trust Company (1929–33), Lincoln Income Life Insurance Company, Louisville, Kentucky (1938–41), the Oklahoma Natural Gas Company (1948), and the Mutual Savings and Loan Company (1954).

Key administered several relief programs during and after the Great Depression. In January 1931 he headed the Executive Relief Committee in Oklahoma City, coordinating public and private relief efforts to local citizens. In 1935 he was appointed Oklahoma state administrator of the Works Progress Administration (WPA). He directed a progressive program that included the construction of more than 350 schools and twenty libraries. The first phase of the state program involved the building of Oklahoma National Guard Armories during the winter of 1935 and 1936. It is significant that of the 126 armories built in the nation, fifty-three were constructed in Oklahoma. By March 1937 the state had received $43 million in WPA funds and had employed more than one hundred thousand Oklahomans.

In January 1938 Key entered politics as a Democratic candidate for governor. During the campaign another candidate accused him of an irregularity in the building of one of the state armories, which Key denied. Key ultimately lost, by a small margin of 3,300 votes, to Leon C. Phillips.

Prior to his death on January 5, 1959, in Oklahoma City, Key received numerous honors and awards. He acquired eight military service awards as well as the Knight Commander, Order of the Falcon from Iceland, and the Order of the Bath from Great Britain. A member of the First Baptist Church, Key was a thirty-third degree Mason and an active member and officer of local civic organizations. In 1948 the University of Oklahoma presented him with a Distinguished Service Citation, and in 1952 the Oklahoma City University awarded him an honorary LL.B. degree. During Key's tenure in Hungary, Hungarian sculptor, Karoly Toerzsoek, created a bronze bust of Key, which was donated to the Oklahoma Historical Society in 1959. The main entrance at Fort Sill is named after Key, as is the library at the Forty-fifth Infantry Division Museum. His accomplishments reflect his desire to serve his community, state, and nation.

The following (as per The Chicago Manual of Style, 17th edition) is the preferred citation for articles:
Linda D. Wilson, “Key, William Shaffer,” The Encyclopedia of Oklahoma History and Culture, https://www.okhistory.org/publications/enc/entry.php?entry=KE014.