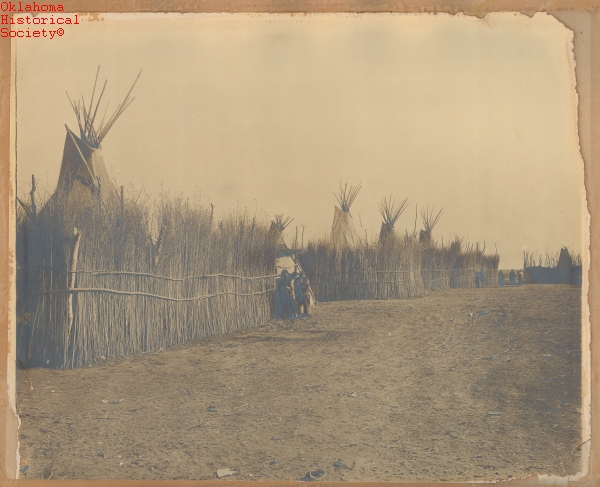 A motion-picture photographer born in Nottingham, England in 1866, James B. "Bennie" Kent came to the United States with his family at the age of eight. After stops in Wisconsin, Iowa, and Nebraska, Kent finally set out on his own to settle in Chandler, Oklahoma Territory, in 1890. Trained as a watch repairman, he opened a jewelry store in Chandler. In 1902, when his young wife died at the age of thirty, Kent took up the hobby of photography to distract him from his sorrow.

Photography became an all-consuming pursuit. Kent sold his jewelry store and devoted his life to taking photos. In 1904 he was commissioned by the St. Louis and San Francisco Railway to shoot photos of scenes in Oklahoma Territory for their exhibit at the Louisiana Purchase Exposition in St. Louis (World's Fair).

Around that same time, the Miller Brothers, owners of the 101 Ranch, became interested in a new line of work called motion pictures. The ranch provided the perfect backdrop and the ranch hands the perfect "extras" for silent Western films. Kent became entranced by this new motion picture business and helped the film crews when needed. He even took over as cameraman when one crew's photographer stomped off the set in anger. Thereafter, he served as the 101 Ranch's official photographer.

Kent finally acquired his own motion-picture camera. Looking like a wooden crate with a lens and hand crank, the 1909 Moy 35mm camera was the latest and best of its kind in the state of Oklahoma. Kent, with his trademark derby hat, could be seen with his film camera and tripod at most big Oklahoma events.

Kent filmed not only scenes in Chandler but across the state. He then began a connection with the Pathé Newsreel company that continued throughout his career. Historical figures who passed before his lens included Quanah Parker, Geronimo, Theodore Roosevelt, William Howard Taft, Warren G. Harding, and Oklahoma governors Cruce, Williams, Robertson, Walton, Trapp, and Johnston. Kent filmed soldiers leaving for service in World War I and filmed their return. He filmed mining disasters, the 1921 Tulsa Race Massacre, floods, American Indian congresses, sporting events, and numerous other Oklahoma activities. Kent was also cameraman for several silent movies made in the state. Working with William Tilghman, he filmed The Wolf Hunt, The Bank Robbery, and The Passing of the Oklahoma Outlaw.

Kent died of a heart attack on December 17, 1945, at the age of eighty. Some of his film has survived in collections at the Lincoln County Historical Society (Chandler) and in the Oklahoma Historical Society in the WKY-TV collection. His images of the 1910s and 1920s provide a precious and lasting moving image of those times in Oklahoma.

The following (as per The Chicago Manual of Style, 17th edition) is the preferred citation for articles:
Bill Moore, “Kent, James B. "Bennie",” The Encyclopedia of Oklahoma History and Culture, https://www.okhistory.org/publications/enc/entry.php?entry=KE017.