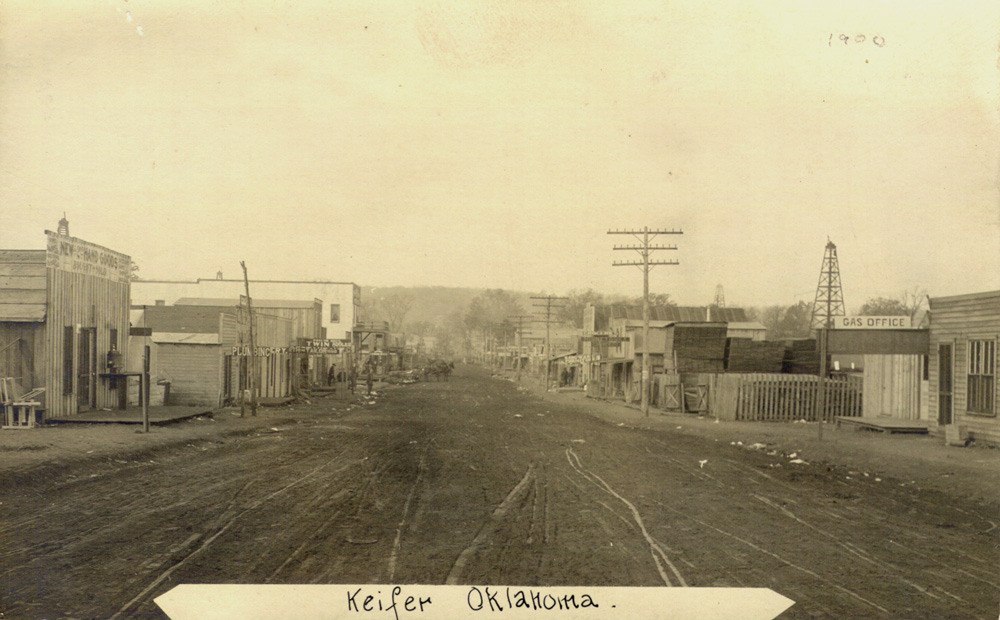 Located in east-central Creek County, Kiefer is situated at the intersection of State Highway 67 and Alternate U.S. Highway 75, six miles southeast of Sapulpa, the county seat. Kiefer, originally known as Praper, grew as an oil-boom town after the development of the Glenn Pool field in 1905. Before the oil activity the community had a few buildings located along a section-line road, and a post office had been established on June 26, 1901. Between 1900 and 1901 the St. Louis, Oklahoma and Southern Railway (later the St. Louis and San Francisco Railway) constructed a line south from Sapulpa through Praper. Because it had the nearest railroad for transporting the Glenn Pool crude to Texas refineries, by November 1906 the community had become a major shipping point.

On December 12, 1906, the post office was redesignated Kiefer and moved two and one-half miles to the west. Sources give conflicting information regarding the naming of the town. Several sources assert that it honored Smith Kiefer, a local resident. Another indicates that it was named for resident John Kiefer. A third suggests that it took the surname of local Creek allottees, whose land was leased for drilling.

In early years Kiefer had a Bowery section and gained a reputation similar to Cromwell's for being a lawless community. On November 20, 1908, a majority of Kiefer's voters favored incorporation. By 1909 the town had an estimated population of two thousand and supported two banks, a weekly newspaper, and sundry businesses. Between 1908 and 1912 the Methodist-Episcopal, the Christian, and St. Mary's Catholic churches were established. During this period citizens also organized fraternal organizations such as the IOOF (Independent Order of Odd Fellows), the Rebekahs, the Royal Neighbors, the Woodmen of the World, and the Woodmen's Circle. By 1915 Kiefer's school system included twenty-three teachers and four school buildings.

As the oil field expanded, the Midland Valley Railroad built a short line from Glenpool to Kiefer in 1916, and the Oklahoma Union Railway established a line that connected Sapulpa, Kiefer, and Mounds in 1923–24. During the early boom the Minnetonka Lumber Company supplied the community's building needs. By 1918 the company had competition from Fullerton-Stuart Lumber Company. Black, Sivalls and Bryan sold oil and water tanks, and the Jarecki Manufacturing Company offered plumbers' supplies.

The first federal census for Kiefer reported 1,197 inhabitants in 1910, and the population peaked at 1,663 in 1920. The Great Depression, which caused oil production to drop, caused Kiefer to decline to 606 people in 1930, a trend that continued through the 1940s until a low of 275 was reached in 1950. Since 1960 the population has increased from 489 to 962 in 1990. During the 1940s and 1950s a drug store, several grocery stores, and gasoline stations served the community. The Jarecki Manufacturing Company continued in business, offering brass and malleable iron products. In December 1964 the closing of the Warren Petroleum gasoline plant, in operation for fifty-one years, marked the end of an era.

At the turn of twenty-first century Kiefer had 1,026 residents. The town continued to support a school system that offered prekindergarten through twelfth grade for 389 students. Of the town's workers, 94.6 percent commuted to jobs elsewhere, most to Tulsa. A population boom brought Keifer to 1,685 residents in 2010.

The following (as per The Chicago Manual of Style, 17th edition) is the preferred citation for articles:
Linda D. Wilson, “Kiefer,” The Encyclopedia of Oklahoma History and Culture, https://www.okhistory.org/publications/enc/entry.php?entry=KI007.