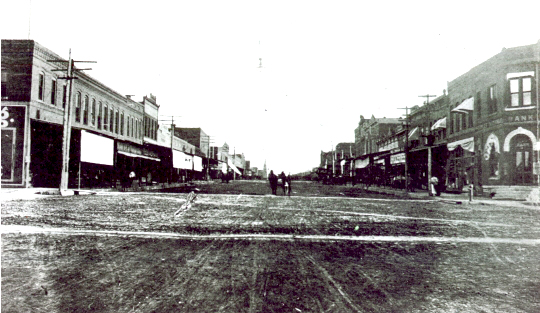 The seat of Kingfisher County, Kingfisher lies forty-five miles northwest of Oklahoma City at the intersection of U.S. Highway 81 and State Highways 3 and 33. It is also at the confluence of Kingfisher Creek and Uncle John's Creek. At one time the stagecoach branch of the Chisholm Trail went through the site on its way to Darlington Indian Agency and Fort Reno. A stage station lay several blocks west of U.S. Highway 81's crossing over Kingfisher Creek. The cattle trail was several miles to the east. In April 1889 the Unassigned Lands opened to non-Indians, and settlers were allowed to cross the Cheyenne and Arapaho Reservation to make the run from the reservation border, one mile west of town. They were called "West Liners," and those who made the run from the Cherokee Strip border, north of Hennessey, would be called "North Liners." Contestants registered their claims at land offices in Kingfisher and Guthrie. At the Kingfisher office, J. V. Admire of Osage City, Kansas, was receiver of monies and J. C. Roberts was register of deeds.

Because the bill opening Oklahoma did not allow a townsite to exceed 320 acres, settlers at Kingfisher organized into two cities. Kingfisher City was on the north side of the settlement, near the land office, and Lisbon lay to its south. Although Lisbon was larger than Kingfisher City when the two united on June 14, 1890, the town was called Kingfisher. On October 23, 1889, the first passenger train of the Chicago, Kansas and Nebraska Railway (later part of the Chicago, Rock Island and Pacific Railway) reached town. By the day of the land run the tracks had only been built as far south as Pond Creek, so settlers were not able to ride the train into Kingfisher as they could into Guthrie or Oklahoma City.

On May 2, 1890, Oklahoma Territory was organized. Comprising the Unassigned Lands, and the Public Land Strip, or Panhandle, it was divided into three judicial districts. The Western District comprised present Kingfisher County, part of Canadian County, and the Panhandle. Abraham Jefferson Seay, a Missouri native, was appointed judge for the Western District and chose Kingfisher as his place of residence.

Before the territory was established, intense lobbying began in an attempt to influence Pres. Benjamin Harrison's choice for governor. Because Harrison had been elected on a home-rule platform, many assumed that he would pick someone from Oklahoma Territory. Among the men suggested by regional newspapers was J. V. Admire, now of Kingfisher. Admire even managed to get the Republican territorial committee to recommend him, to no avail, as Harrison chose George Washington Steele of Ohio.

Steele quickly tired of Oklahoma politics, returning to Ohio in fall 1891. In February 1892 President Harrison appointed Abraham Jefferson Seay as the second territorial governor. Seay naturally hoped to make Kingfisher the capital and in April 1892 just west of town built a three-story mansion, "Horizon Hill," hoping it would remain the gubernatorial manse. Unfortunately, Seay was forced to abandon the idea of moving the capital in order to get the legislature to agree to sanction biennial elections.

Kingfisher, meanwhile, grew rapidly from 1,134 in 1890 to 2,301 in 1900 and 2,538 in 1910. Its first big industry was the Oklahoma Mill, established in June 1893. An 1895 issue of the Kingfisher Free Press reported that 100,000 bushels of wheat had been milled there, and that Kingfisher was the world's leading market for wheat. While the town no longer has flour mills, two large grain elevator complexes store the area's wheat before shipment via the Southern Pacific Railroad. In 1901 the Rock Island and the Santa Fe railroads agreed to jointly build east to Guthrie. Later nicknamed the "Peavine," various portions of this survived until 1935. An attempt to build west to Okeene did not receive enough financial support.

Kingfisher's first schools were in tents, but soon an educational system blossomed. A normal school for educating teachers was held in 1895. The first high school was built in 1898 on the future location of Washington grade school. A new one was built in 1911, and additions to it came in 1923 and 1960. In 1894 the local Congregational Church began an academy that in 1895 became Kingfisher College. Located on a prominent hill about a mile east of town, the four-year, liberal arts college specialized in education and religious instruction and lasted until 1922. The school produced three Rhodes scholars. Harriet Parker Camden, daughter of J. H. Parker, the institution's founder, wrote "Oklahoma, A Toast," the first official state song. From 1927 until 1932 the campus served as King's College, run by the Pentecostal Holiness Church.

Over time Kingfisher developed many amenities. A library movement that began in 1928 resulted in a new ten-thousand-foot library in 1989. A small downtown hospital served from 1928 until a new one was built in 1949. A 1927 municipal swimming pool operated until an indoor one opened in 1999 next to a public golf course. Citizens attended numerous churches, including Roman Catholic, Baptist, Methodist, Federated (Presbyterian-United Church of Christ), Lutheran, Nazarene, Church of Christ, and several others. The 1920 population stood at 2,446, the 1940 at 3,352, the 1950 at 3,345, and the 1980 at 4,245.

Over the years Kingfisher natives have made an impact in various ways. Born in Kingfisher, Don Blanding, a poet in the 1930s and 1940s, published a collection entitled Vagabond House. In the 1950s and 1960s Mollie Shepherd, a Northern Cheyenne, wrote newspaper columns about the lives of members of her tribe. C. P. Wickmiller started the state's first drugstore and served as a photographer on the 1883 Boomer expedition. Joseph Danne researched and improved the Triumph and Super Triumph strains of wheat. R. A. Young, founder of T.G.&Y, opened his first store in Kingfisher. "Apostle Paul Sykes," an African American preacher at the Straight Gate Church, wrote the spiritual "Old Ark's a-Moverin'." G. I. Currin was elected as one of the few African Americans serving in the first territorial legislature. Sam Walton, founder of Wal-Mart, was born in Kingfisher.

In 1958 Pioneer Telephone Cooperative purchased fourteen exchanges from Western Telegraph and Telephone Company and has since become a major, independently owned telephone cooperative headquartered in Kingfisher. The city maintains a commission-manager government. With a 2000 population of 4,380, Kingfisher remained prosperous and viable, serving as a "bedroom" community for workers in Oklahoma City and Enid and remaining the county's business and agriculture center. The 2010 census recorded 4,633 residents. Among the properties listed in the National Register of Historic Places were the Kingfisher National Guard Armory (NR 94000279), the Kingfisher Post Office (NR 78002239), and the Seay Mansion (NR 71000664).

The following (as per The Chicago Manual of Style, 17th edition) is the preferred citation for articles:
Glen V. McIntyre, “Kingfisher,” The Encyclopedia of Oklahoma History and Culture, https://www.okhistory.org/publications/enc/entry?entry=KI010.