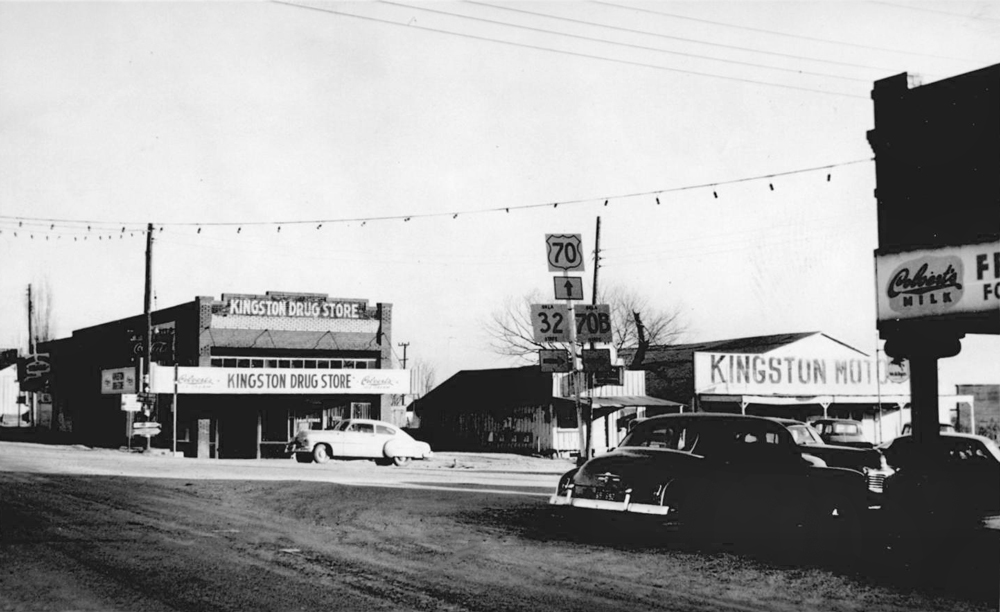 An incorporated community in Marshall County, Kingston is situated eight miles southeast of Madill at the junction of U.S. Highway 70 and State Highways 32, 70A, and 70B. Established in 1894 in Pickens County, Chickasaw Nation, Indian Territory, the town was named for Jeff King, a local resident. The Kingston post office was established on April 4, 1894, with John F. Robinson as postmaster. The settlement included a general store, a cotton gin, and a schoolhouse that served as a church.

In 1900 construction of the St. Louis, Oklahoma and Southern Railway progressed through Indian Territory, and townsites were surveyed along the right-of-way. A station was established some two miles northeast of Kingston on the land of James Hampton Willis, a Chickasaw, and was named in honor of his daughter, Helen. Kingston's post office and businesses moved there to be near the railroad. Attempts to have the post office name changed to Helen were unsuccessful, as there was already a Helena, Indian Territory. Because confusion resulted from the station and post office having different designations, railroad officials renamed the depot Kingston. The town was incorporated on November 2, 1906, and its population was 477 in 1907.

Kingston's early residents designed projects to attract business. Traders' Day was initiated in June 1906 to promote community progress. The monthly event featured entertainment and contests. With statehood and the formation of Marshall County in 1907, an election ensued between Madill and Kingston to determine the county seat. Madill won, but Kingston continued to grow and prosper. By 1917 the town was home to various enterprises including an ice factory, two banks, and four cotton gins. Telephone and telegraph services were available, and early newspapers were the Kingston Messenger and the Marshall County Messenger.

After World War I ended, the town declined. A drought began in Marshall County during the 1920s, and a boll weevil infestation damaged area cotton crops. Local farmers' problems were compounded by soil depletion. Soon the whole nation was in the Great Depression, and many Oklahomans migrated to find work. The 1938 Kingston telephone book listed only eleven businesses. The population fell from 767 in 1920 to 481 in 1940.

The 1944 completion of Denison Dam on the Red River and the formation of Lake Texoma spurred new growth. Due to the lake's popularity tourism became an important industry. The lake attracts millions of visitors annually, and Kingston has benefited by having Lake Texoma Lodge located just east of town. The annual Striper Festival, which began in 1990, gave the community an added attraction. As a result of this prosperity Kingston reported population increases in every census: 677 in 1950, 710 in 1970, 1,237 in 1990, and 1,390 in 2000. It peaked at 1,601 in 2010.

The following (as per The Chicago Manual of Style, 17th edition) is the preferred citation for articles:
Paulline Gray, “Kingston,” The Encyclopedia of Oklahoma History and Culture, https://www.okhistory.org/publications/enc/entry.php?entry=KI015.