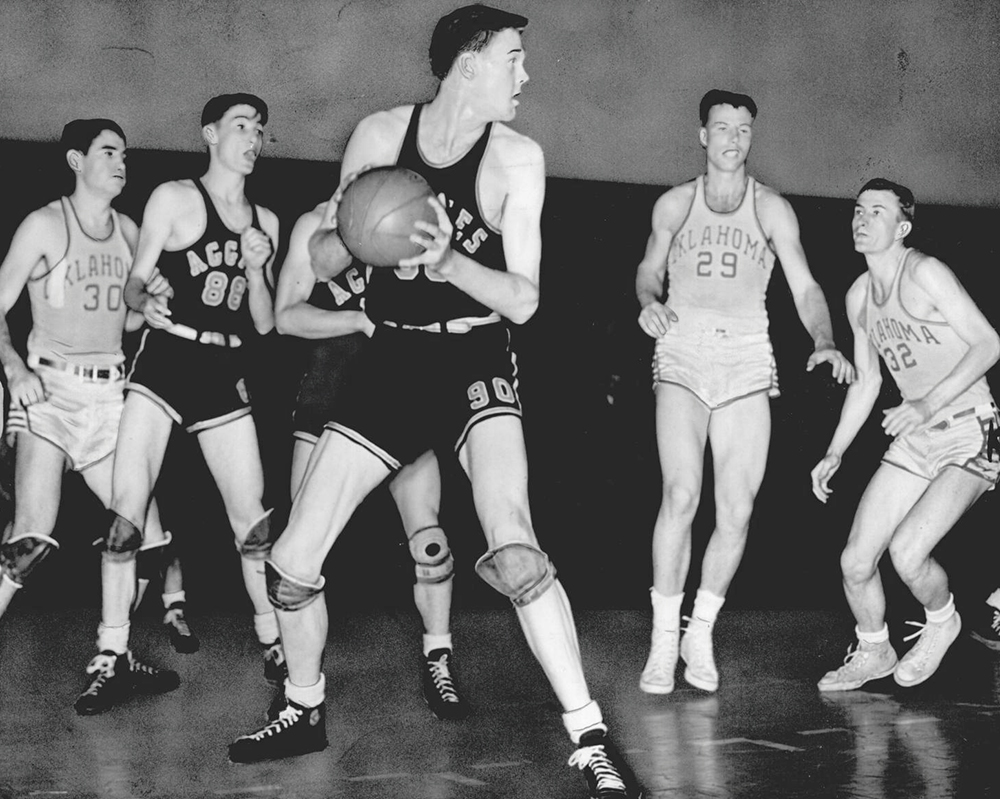 Bob Kurland, the first seven-foot-tall player in college basketball history, led Oklahoma A&M College (now Oklahoma State University) to the heights of back-to-back NCAA championships in 1945–46, but it was far from easy for Kurland or Coach Hank Iba. Kurland scored 1,669 points during his four-year career under Iba, leading the nation as a senior in 1946 with 643 points in thirty-three games for a 19.5 average. His fifty-eight points against St. Louis in 1946 remained a school record until 1979. It was on defense, however, that Kurland earned his place at Oklahoma A&M and where he continued to excel.

Kurland continued working for his scholarship, often sweeping the Gallagher Hall floor before a game, and he became an All-American. He led the Aggies to the final of the National Invitational Tournament in 1944 and then to the National Collegiate Athletic Association championships in 1945–46. After winning the NCAA title in 1945, Oklahoma A&M played NIT champion DePaul in a Red Cross benefit game. Kurland outplayed six-foot-nine George Mikan in a 52 to 44 victory that meant an undisputed national championship. Kurland was named All-American three years in a row and won the 1946 Helms Foundation award as the nation's outstanding player. After he graduated, Kurland went on to further basketball heights, playing for the Phillips Petroleum Company 66ers and with gold-medal–winning U.S. Olympic teams in 1948 and 1952. After basketball, he had a long career of employment with Phillips. Bob Kurland died on September 29, 2013, in Florida.

The following (as per The Chicago Manual of Style, 17th edition) is the preferred citation for articles:
Max Nichols, “Kurland, Robert Albert,” The Encyclopedia of Oklahoma History and Culture, https://www.okhistory.org/publications/enc/entry.php?entry=KU003.