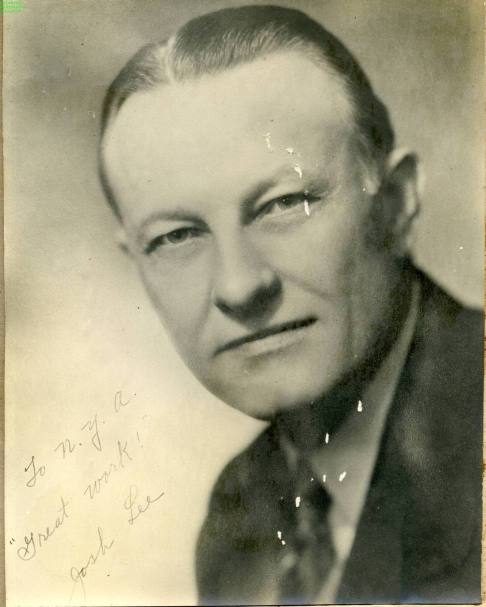 Once called "a city feller with a hick name," "Josh" Lee, who served Oklahoma as both a senator and a representative in Congress, was born in Childersburg, Talladega County, Alabama, on January 23, 1892, the son of Dr. Thomas Jefferson and Josie Fowler Lee. He was christened Joshua but later acquired the middle name of Bryan after William Jennings Bryan. The family moved to Pauls Valley, Indian Territory, when he was three and later to near Hobart in 1901. Shortly after statehood they relocated to the vicinity of Rocky. The younger Lee attended public schools in the last two towns.

He attended Oklahoma Baptist University (OBU) and the University of Oklahoma (OU), receiving a bachelor's degree from the latter in 1917. He supported himself as a teacher in the public schools of Rocky (1911–13) and a coach of athletics and teacher of public speaking at OBU (1913–15). In 1916 he won the national collegiate oratorical championship. In 1924 he received a master's degree in political science from Columbia University and in 1925 an LL.B. degree from Cumberland University of Tennessee. Lee was inducted into the U.S. Army in 1917. During World War I he served fourteen months in France as a private in the 135th Infantry, Thirty-fourth (Sandstorm) Division.

Upon his return to the United States in 1919 he went to OU, and he became head of the public speaking department. He held this position until 1934 when he first ran for the U.S. Congress. His students included Carl Albert and Mike Monroney. Lee was a widely known lecturer and speaker and the author of such books as Soldier Rhymes (1919), Public Speaking (1924), The Battle of Cognac, and Other Soldier Rhymes (Oklahoma City: Harlow Publishing Corp., 1948), and How to Hold an Audience Without a Rope (Chicago: Ziff-Davis Publishing Co., 1947). The New York Times called him a "silver-tongued, slick-haired Demosthenes from Oklahoma," and both that newspaper and Time magazine considered him Oklahoma's second-best public speaker, after Will Rogers.

Lee married Louise Gerlach of Woodward, Oklahoma, on January 17, 1923. He and his wife had two children, Robert Joshua and Mary Louise. Near Norman he bought and operated a farm. He also owned and ran a ranch in western Oklahoma. In 1934 the voters of Oklahoma's Fifth District elected Lee as a Democrat to the U.S. House of Representatives. He served only one term, from January 3, 1935, to January 3, 1937. In 1935 on the House floor, he delivered a eulogy honoring humorist Will Rogers.

In 1936 he ran against and beat the incumbent, Sen. Thomas P. Gore, in the Democratic primary and won the senatorial contest in the general election that year. Gore was unpopular with voters for not supporting Pres. Franklin D. Roosevelt and the New Deal. Lee, on the other hand, supported the administration. He also had a strong campaign organization staffed by former students called "Rover Boys," which included Alfred P. Murrah, Luther Bohanon, and Eugene Rice Duncan.

The new senator held his seat in the upper legislative body from January 3, 1937, to January 3, 1943. He served on the following Senate standing committees: Commerce, Education and Labor, Irrigation and Reclamation, Military Affairs, and Public Lands and Surveys. He was also on the Special Conservation and Utilization of Aquatic Life Committee. While he was on Commerce, the committee considered legislation that created the Civil Aeronautics Board (CAB), and Lee held a seat on the subcommittee studying aviation. He gained attention in the late 1930s when he sponsored a bill to draft wealth as well as men in the event of war. In 1939 he was elected secretary of the majority caucus and became a member of the Senate Democratic steering committee. In 1940 he was a leading advocate in the Roosevelt third-term movement, and he was considered a potential vice-presidential candidate. In 1941 the president appointed him chair of the U.S. delegation to the Pan-American Highway Congress in Mexico City. Before the United States entered World War II, Lee supported preparedness and aid for the Allies. In 1942 he chaired a military affairs subcommittee that held hearings on air cargo.

The senator won the Democratic primary handily in 1942 but failed in his bid for reelection. His opponent was Ed Moore, a lifelong Democrat turned Republican who conducted a vigorous, well-financed campaign. Moore took advantage of the public's waning support for the New Deal and its concern over early losses in the war. Lee remained in Washington, D.C., through the fall to press a legislative amendment banning alcoholic beverages from army and navy bases. Beer forces moved to the Moore camp. The senator returned to Oklahoma just ten days before the November election, too late to secure a victory.

On February 8, 1943, the president appointed Lee to an unexpired term on the CAB. He was later appointed for two full terms. In this capacity he urged development of municipal aviation operations, participated in international air conferences, and negotiated air agreements with other countries. In 1949 he served as the board's chair. He retired on December 31, 1955.

Upon retirement, Lee returned to Oklahoma. He lived at and ran his farm near Norman and carried out his ideas on conservation. He also practiced law with the Oklahoma City firm of Bohanon, Barefoot and Lee. Josh Lee died in Norman on August 10, 1967. He was interred in the IOOF Cemetery there.

The following (as per The Chicago Manual of Style, 17th edition) is the preferred citation for articles:
Todd J. Kosmerick, “Lee, Joshua Bryan,” The Encyclopedia of Oklahoma History and Culture, https://www.okhistory.org/publications/enc/entry.php?entry=LE004.