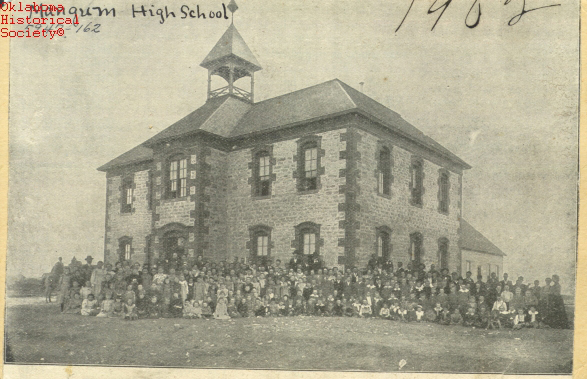 Located at the intersection of State Highway 34 and U.S. Highway 283 in southwestern Oklahoma, Mangum is the county seat of Greer County, formerly Old Greer County. Early on, the Kiser Salt Works was located nearby on the Elm Fork of the Red River. Beginning in 1876 cattle drives went through this area using the Western Trail. In 1882 Henry Clay Sweet established the town on a land grant from Texas to A. S. Mangum. A post office was established April 15, 1886. A part of Texas at that time, this area became part of Oklahoma Territory in 1896 and Oklahoma in 1907. The Chicago, Rock Island and Pacific Railway built a line west from Chickasha to Mangum in 1900. By 1910 the Wichita Falls and Northwestern Railway (acquired by the Missouri, Kansas and Texas Railway in 1911) operated a line through Mangum. Incorporated in 1915, Mangum grew until farming operations became highly technical. Before farming took place in the early twentieth century, large cattle ranches existed on land owned and leased by companies such as the Day Land and Cattle Company of Texas and the Franklyn Land and Cattle Company, an English syndicate. By 1939 approximately 60 percent of the land was farmed by tenant farmers.

Using granite quarried from the nearby Quartz Mountains, the Oklahoma Granite Company opened in 1904. Two of the oldest businesses, still in operation, are the Mangum Star newspaper and the Mangum Brick Plant. The first edition of the Mangum Star was published in 1887. The brick plant, established in 1903 by D. J. Doyle and today owned and operated by Jewett Scott, has greatly expanded, annually producing approximately twenty-five million bricks. With 2,672 residents at statehood, Mangum had two schools, an opera house, and the county courthouse (listed in the National Register of Historic Places, NR 85000682). The town's population peaked at 4,806 in 1930. In the 1930s federal funding through the Works Progress Administration built the Mangum National Guard Armory (NR 94000278) and the Mangum Community Building (NR 95000236). By the late 1930s Mangum had seven cotton gins, one cotton oil mill, one cotton compress, and one flour mill. Three banks had combined assets of $2.5 million. The population held steady around four thousand from 1940 to 1970. It dropped from 3,833 in 1980 to 3,344 in 1990.

From the first school, established in a dugout in 1886, to the twenty-first-century state-of-the-art school system, education has been especially important. Religion has also played an important role in the lives of the citizenry. Proud of their western heritage, locals formed the Mangum Mountie Riding Club in the 1920s. Hosting an annual three-day rodeo in July, the club had 135 members representing forty-three families by 1982.

At the turn of the twenty-first century Mangum's population stood at 2,924, and it grew slightly to 3,010 in 2010. An Old Greer County Museum and Pioneer Hall of Fame, a genealogy department at the Margaret Carder Library, an annual Rattlesnake Derby in April, and the Quartz Mountain State Park (renamed as Quartz Mountain Resort) draw many visitors to Mangum, on the banks of the Salt Fork of the Red River.

The following (as per The Chicago Manual of Style, 17th edition) is the preferred citation for articles:
Peggy Crabb Bielich, “Mangum,” The Encyclopedia of Oklahoma History and Culture, https://www.okhistory.org/publications/enc/entry.php?entry=MA010.