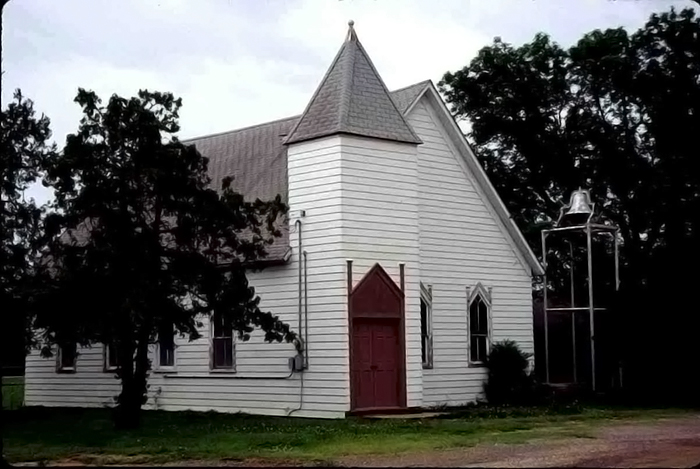 The community developed after the Unassigned Lands of central Oklahoma opened to settlement in April 1889. Sylvan T. Rice, a homesteader, opened a store on the northwest corner of his land in July 1894, and soon other settlers were attracted to Rice's corner. In March 1890 Rice received a postal designation for Marshall, which he named for his hometown, Marshalltown, Iowa. Rice has since been considered to be Marshall's founder. The opening of the Cherokee Outlet in September 1893 increased the settlement's population, and business boomed. In January 1894 Roy E. Stafford, Irvin H. Stafford, and Joseph Cromer filed a town plat on land owned by Cromer and by Miles Rice, uncle of Sylvan and owner of the adjacent claim. A lot sale held in spring 1894 encouraged Sylvan Rice and his neighbors to move there. A Baptist Church was constructed in 1892, Methodist and Disciples of Christ congregations formed, and social organizations included IOOF (Odd Fellows), Masonic lodge, and the Grand Army of the Republic.

The Denver, Enid and Gulf Railroad, a line chartered on March 31, 1902, by Ed Peckham and the Frantz brothers, constructed tracks through the area in mid-1902. Rice and several other residents purchased land, formed a townsite company, sold lots, and gave twenty thousand dollars to the railroad as a premium for building close to their town. The first train arrived in Marshall in summer 1902. The town of "New" Marshall, its name reflecting the move closer to the tracks, was incorporated in 1903. In 1907 the Eastern Oklahoma Railway bought the rail line and sold it the same year to the Atchison, Topeka and Santa Fe Railway (in 2000 it continued to operate as the Burlington Northern Santa Fe). At 1907 statehood the census recorded 364 inhabitants, a number that increased to 480 by 1910. At that time the town supported two banks, two hotels, and German Evangelical and Roman Catholic congregations had been formed. By 1918 locals enjoyed a motion-picture theater. Newspapers informing the community included the Marshall Tribune in the pre–World War II years and the Marshall News after the war. In 1927 oil was discovered in the vicinity, and the Roxana Pool developed west and south of town. Jobs and prosperity resulted. In 1920 the population stood at 343 but it doubled by 1930, rising to 695.

Agriculture remained Marshall's mainstay. The Marshall Milling Company opened around 1900 and operated briefly, and a cotton gin operated for a time, but the Farmers' Cooperative elevator continued to store the product of local wheat fields throughout the twentieth century. The Bank of Marshall opened in 1902. During the 1940s and 1950s agribusinesses included a hatchery, a produce and feed store, and a grain dealer. A dozen other retail businesses provided the inhabitants with life's necessities. In 1967 the Will Rogers Library, a public facility, opened in a building donated by Angie Debo and restored by citizen labor.

The oil field declined with the arrival of the Great Depression, and by 1940 Marshall's population dropped to 382. It hovered around four hundred through the mid-1980s. The community was the hometown of historian Angie E. Debo, whose fictionalized account of it in Prairie City: The Story of an American Community (1944) was based on her experiences. The appropriately named Prairie City Piper published the news in the 1970s. Marshall's schools served three hundred students within a sixty-eight-square-mile district by 1939 but in 1976 residents consolidated their system with that of nearby Covington.

Through the second half of the twentieth century Marshall, like other rural Oklahoma communities, suffered a slow decline. The 1950 population of 386 actually rose to 420 in 1970 with a second oil boom, but since that time it has decreased to 372 and 288 in 1980 and 1990, respectively. Prairie City Days and Rodeo has been held each April to commemorate the 1889 land run that brought the town into existence. Marshall finished the twentieth century with 258 residents, still a viable rural agricultural center, although 60 percent of employed residents commuted to jobs elsewhere. The 2010 census registered a population of 272.

The following (as per The Chicago Manual of Style, 17th edition) is the preferred citation for articles:
Dianna Everett, “Marshall,” The Encyclopedia of Oklahoma History and Culture, https://www.okhistory.org/publications/enc/entry.php?entry=MA029.