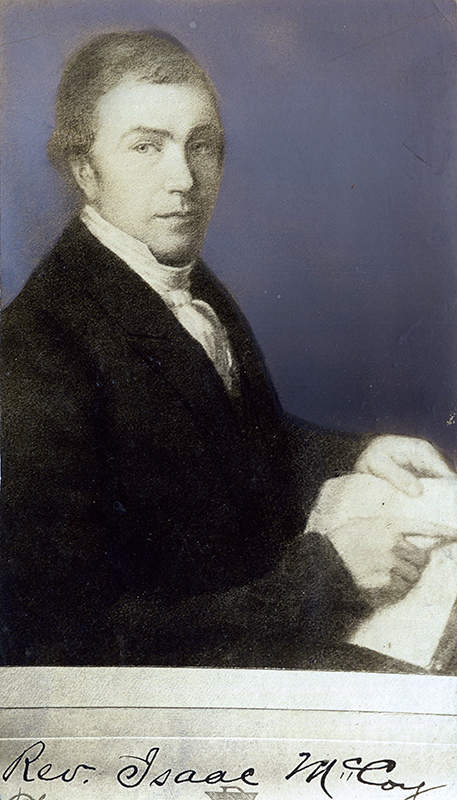 Baptist missionary, surveyor, and advocate of Indian Removal, Isaac McCoy was born in Uniontown, Pennsylvania, on June 13, 1784. Raised in Kentucky, he was ordained a Baptist minister circa 1804 in Indiana. He matured at the beginning of an important period of American history, the Second Great Awakening, an evangelical movement that included the idea of converting American Indians to Christianity. In 1817 the Baptist Board of Foreign Missions named him a missionary to the Miami Indians in Indiana. He also ministered to the Potawatomi, Wea, and Ottawa tribes in Michigan. A charter member of the Indiana Auxiliary American Colonization Society, McCoy advocated returning all of the United States' African people to Africa and was himself a slave owner in the 1830s. He spent much of his life as a federal government surveyor, rigorous work that he preferred over the chores of operating a mission.

Although Pres. Thomas Jefferson had proposed a trans-Mississippi Indian zone in the early 1800s, the idea only slowly gained popularity. Indian removal began in the second decade of the century; for example, the Cherokee Treaty of 1817 began the removal process for that nation. McCoy became a vocal proponent of relocating Native peoples to a well-defined, permanent "Indian colony" west of the Mississippi, and he first expressed this view in 1823.

In 1827 he elaborated his views in Remarks on the Practicability of Indian Reform, Embracing Their Colonization. He saw American Indians as being doomed to degradation by close association with whites, and he saw the trans-Mississippi region as a "promised land" where the tribes could "progress toward civilization" undisturbed. Eventually he decided that the colony should be a legal territory of the United States, and at least by 1834 he called it "Indian Territory" and "Aboriginia Territory." There, each tribe would have its own "county," and each Indian would have an individual land grant, with property rights. The territorial governor would, however, be white, as would judges, but Indians of each tribe would elect representatives to an intertribal legislative assembly. During the late 1830s he lobbied Congress for a territorial organization act, which was never effectuated.

McCoy directed most of his efforts toward surveying tracts in the "Indian Colonization Zone" west of the 95th Meridian in present Kansas. In 1826 he assisted in the relocation of the Miami and Ottawa people to new homes in the west. In 1828 he headed two small expeditions of Choctaws, Chickasaws, and Creeks to examine places where they might be resettled. On the second trip he brought them south to the Canadian River. Operating under the new "removal policy" adopted in 1824, Secretary of War John C. Calhoun appointed McCoy as an Indian agent and surveyor. In the1830s he commissioned McCoy numerous times to mark the boundaries of lands that would be the future homes of various tribes in the first wave of removal.

The informal "Indian Territory," which became accepted as an appropriate place for Indians, originally encompassed the present states of Nebraska, Kansas, and Oklahoma, the region where McCoy surveyed. Between 1831 and 1837 he marked out tracts guaranteed to the Cherokee people by the treaties of 1828 and 1835, in preparation for removal from Georgia. This included the Cherokee-occupied land in northeastern Oklahoma, the Cherokee Neutral Lands in southern Kansas, and the Cherokee Outlet in north-central/northwest Oklahoma. He popularized the term Indian Territory in the title of his Annual Register of Indian Affairs Within the Indian (Or Western) Territory, published in 1835–38 at Shawnee Baptist Mission, Kansas.

McCoy conducted a little missionary work as well. In 1832 he established the first Baptist congregation in the Creek Nation, Muscogee Baptist Church, about ten miles north of present Muskogee. He was the author of a History of Baptist Indian Missions, Embracing Remarks on the Former and Present condition of the Aboriginal Tribes, Their Settlement Within the Indian Territory, and their Future Prospects, published in 1840. After a decade in Indian Territory, in 1842 McCoy moved to Louisville, Kentucky, where he founded and directed the American Indian Mission Association. He died there on June 21, 1846. His personal papers, an extensive, thirty-eight-volume collection now held by the Kansas State Historical Society, provide an invaluable record of the years of Indian Removal and the development of the "Indian Territory."

George A. Schultz, An Indian Canaan: Isaac McCoy and the Vision of an Indian State (Norman: University of Oklahoma Press, 1972).

The following (as per The Chicago Manual of Style, 17th edition) is the preferred citation for articles:
Dianna Everett, “McCoy, Isaac,” The Encyclopedia of Oklahoma History and Culture, https://www.okhistory.org/publications/enc/entry?entry=MC014.