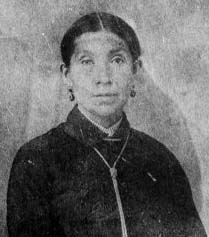 Commonly known as "Aunt Jane," Jane Austin McCurtain was an educator, a school superintendent, and an advisor and secretary for her husband, Choctaw chief Jackson Frazier McCurtain. Her father, Lewis Austin, was a full-blood Choctaw. He married Jane's mother, Mollie Webster, who was one-fourth white. Jane, their oldest child, was born near Fort Towson on August 19, 1842. Her parents and Choctaw heritage instilled Jane's desire for an education, which she promoted throughout her life.

In 1853 eleven-year-old Jane Austin entered Wheelock Academy, graduating five years later. As part of the Choctaw tradition of educating their children in the United States, Jane attended the Edgeworth Seminary at Pittsburgh, Pennsylvania. Afterward, she taught near her Doaksville home in autumn 1861. The Civil War had begun, however, and all tribal schools were soon closed.

During the conflict Jane met Jackson F. McCurtain, a mixed-blood Choctaw, whom she married in November 1865. McCurtain, the son of Cornelius and Mahayia Nelson McCurtain, was born in Mississippi on March 4, 1830. At the start of the Civil War he was a captain in the Confederate First Regiment of Choctaw and Chickasaw Mounted Rifles and was promoted to lieutenant colonel of the First Choctaw Battalion. He and Jane settled near Kent in present Choctaw County in 1868 and were the parents of five children. As president of the Choctaw senate, Jackson McCurtain became principal chief of the Choctaw Nation upon Chief Isaac Garvin's death in February 1880. McCurtain was elected chief later that year and was reelected in 1882.

Jane McCurtain assisted her husband as an advisor and secretary. In 1883 they moved to Tuskahoma, site of the construction of a new Choctaw National capitol. Jackson McCurtain died at Tuskahoma on November 14, 1885. Jane remained active in tribal politics as an advisor to her two brothers-in-law, chiefs Edmund and Green McCurtain.

A former teacher and lifelong advocate of childhood education, Jane was superintendent of the Jones Academy, a boys' school near Hartshorne, from 1894 to 1898. She subsequently remained in Tuskahoma and served as custodian of the Choctaw capitol building. Jane Austin McCurtain died on October 27, 1924, and was buried beside her husband at Tuskahoma.

John Bartlett Meserve, "The McCurtains," The Chronicles of Oklahoma 13 (September 1935).

The following (as per The Chicago Manual of Style, 17th edition) is the preferred citation for articles:
Elizabeth A. Searle, “McCurtain, Jane Austin,” The Encyclopedia of Oklahoma History and Culture, https://www.okhistory.org/publications/enc/entry.php?entry=MC019.