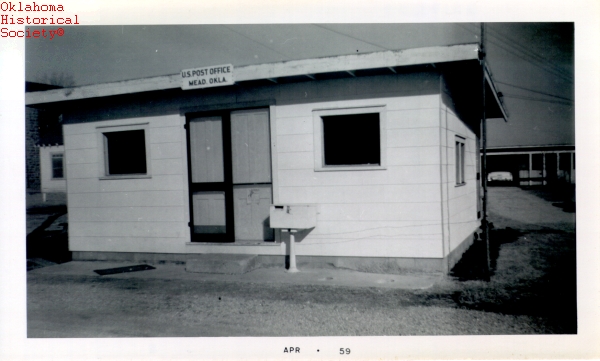 Located in Bryan County, Mead lies adjacent to U.S. Highway 70, approximately six miles west of Durant. In 1866 a band of Creeks who were being provisioned by the federal government camped one mile southwest of present Mead. West of their location existed two large springs, which they selected as a camp meeting grounds. Many Presbyterian missionaries, including Allen Wright, Stephens Peter, J. Frank Wright (son of Allen), and Dixon Durant, held services there. Durant preached in Choctaw and English, serving a mixed audience of Choctaws and non-Indians.

Within a short time A. J. Lucy arrived in the area and opened a store, naming the village Double Springs. As the number of residents increased, they built a church, which also kept a school. C. W. Guew began a subscription school, charging white children one dollar per month and allowing American Indian children to attend free of charge. In 1890 C. W. Meade moved to Double Springs, established a store, and became the first postmaster. In 1894 the name changed to Meade, and later the final "e" was dropped.

In 1902 the Choctaw and Arkansas Railway, which later that year became the St. Louis, San Francisco and New Orleans Railroad, built a line one mile north of Mead, and the town moved adjacent to the tracks. Prior to 1907 statehood the new Mead had a mattress factory, a garage, a bakery, a bank, a grocery store, a dry goods store, a drugstore, three doctors, and a newspaper, the Mead Messenger. The 1918 population was estimated at three hundred residents. The number declined to approximately 150 by 1936. The bank closed in 1924, and by the mid-1930s most of the businesses had closed. Only a general store, a barbershop, and a drugstore remained.

During most of the twentieth century agriculture and ranching dominated the area's economic focus. In 1970 the population had dropped to 80 residents. Tourism at nearby Lake Texoma and the proximity to Durant has helped the town revive, with a 1980 population of 143. In 2000 the population stood at 123 and in 2010 at 122.

The following (as per The Chicago Manual of Style, 17th edition) is the preferred citation for articles:
Lucille Brimage, “Mead,” The Encyclopedia of Oklahoma History and Culture, https://www.okhistory.org/publications/enc/entry.php?entry=ME001.