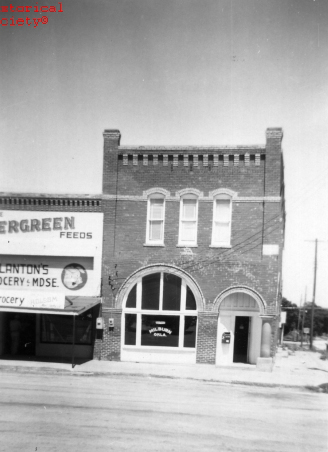 Lying at the junction of State Highway 48A and State Highway 78, Milburn is located in Johnston County, eight miles east of Tishomingo. The area stood in the Chickasaw Nation after 1855, and a community named Ellen formed approximately three miles northwest of the present town. As the Western Oklahoma Railroad, which became the Choctaw, Oklahoma and Gulf Railroad, planned to lay tracks through the vicinity, a townsite initiative emerged. Richard McLish served as a townsite agent for the railroad and was to develop the village. W. J. Milburn, a druggist from Emet and later a state representative, persuaded the Chickasaw landowner, M. C. Condon, to give Milburn power of attorney. Milburn planned to control the town's development or negotiate it with the railroad. From early 1901 until May 1902 several legal and physical maneuvers occurred between the parties over the ownership of the land or portions of land, with Condon selling his interests to Milburn.

During that period the town had many names. The railroad considered Morris, but decided to call the site McLish. Condon suggested the name Blue, the name used by the U.S. Department of Interior in 1902. Milburn urged the Ellen postmaster, W. H. Nichols, to petition to rename the Ellen post office and move it to the railroad townsite. The first name submitted was Condon, but the Post Office Department rejected it, and the name became Milburn in August 1901. Until the railroad and W. J. Milburn reached a settlement in May 1902 the post office was Milburn and the railroad depot was McLish.

In August 1902 Mark Kirkpatrick surveyed the townsite, which the Department of Interior approved. The town had a sufficient population by June 1904 to incorporate. The Chickasaw Townsite Commission held a lot sale in August 1904. After 1907 statehood, Milburn and three other towns vied for the Johnston County seat. Milburn finished second behind Tishomingo. The community had a subscription school until 1905–06 when it became public. By 1910 the town's population stood at 438. In 1911 two banks, a newspaper, the Milburn News, a lumber company, four doctors, two drugstores, and several retail outlets served the villagers and area farmers. Several local cotton gins, cotton buyers, and livestock speculators thrived in the early twentieth century. Other early newspapers included the Herald-Banner and the Milburn Mirror.

As Oklahoma's cotton industry declined after World War I, area farmers dispersed, stunting the town's development. The population declined from 496 in 1920 to 442 in 1940. In 1938 the railroad abandoned the local line. By 1946 Milburn had a drugstore, several grocery stores and gas stations, and a photographer. In 1960 the town reached a low of 228. Milburn slowly regained population, with 275 residents in 1970 and 376 in 1980. In 1987 a newly constructed city hall and fire station opened. By 2000 the prekindergarten-through-twelfth-grade school had an enrollment of 241, and the town's population was 312. The 2010 census recorded 317 residents.

The following (as per The Chicago Manual of Style, 17th edition) is the preferred citation for articles:
Larry O'Dell, “Milburn,” The Encyclopedia of Oklahoma History and Culture, https://www.okhistory.org/publications/enc/entry.php?entry=MI017.