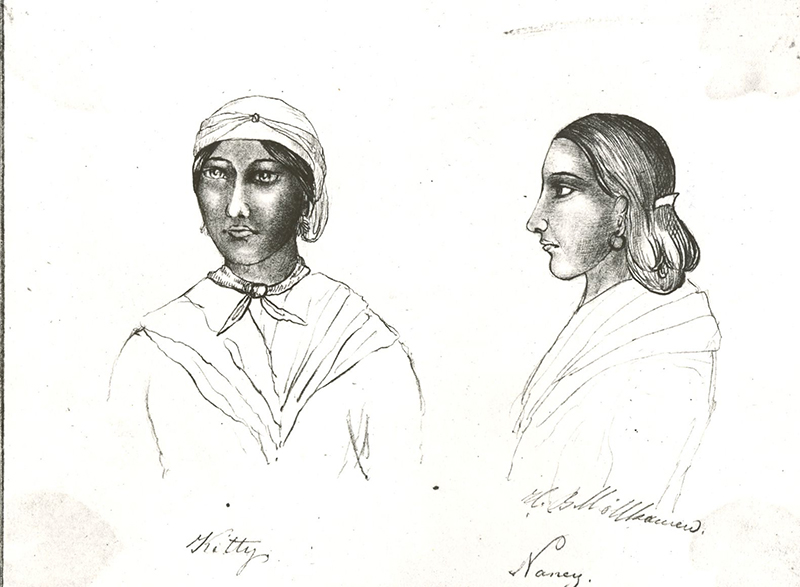 An artist for exploratory surveys of the American West, Heinrich B. Möllhausen was born near Bonn, Prussia (present Germany), on January 27, 1825, and served in the Prussian army before immigrating to the United States in 1849. In 1851 he accompanied Prince Paul of Wurttemberg on an expedition to the Rocky Mountains. Following several months in Nebraska Territory, Möllhausen visited St. Louis and New Orleans, returning to Europe in autumn 1852.

In Berlin in January 1853 Möllhausen met explorer Alexander von Humboldt, who encouraged him to resume his Western travels. Möllhausen returned to the United States in May and went to Washington, D.C., and on Humboldt's recommendation he was appointed draftsman and topographer with First Lt. Amiel W. Whipple's transcontinental railroad survey along the 35th Parallel. From Fort Smith, Arkansas, the Whipple party set out on July 15, 1853, and traveled westward across Indian Territory, Texas, New Mexico, Arizona, and California, arriving at Pueblo de Los Angeles in March 1854. In August 1854 Möllhausen was back in Berlin, and again with Humboldt's support he secured appointment as custodian of the royal libraries in Potsdam, a post he held for the rest of his life.

In 1857 Möllhausen was invited to accompany the official U.S. survey of the Colorado River under First Lt. Joseph C. Ives. Led by astronomer P. H. Taylor, Möllhausen's party reached Fort Yuma above the mouth of the Colorado in January 1858. From that point the explorers ascended the river some 530 miles. Afterward, Möllhausen retraced the route of his earlier travels via the Santa Fe Trail to Fort Leavenworth. He sailed for Europe from New York in September 1858.

Möllhausen produced the majority of the illustrations for Whipple's report, which was included in the twelve-volume Reports of Explorations and Surveys . . . for a Railroad from the Mississippi River to the Pacific Ocean, published by the Government Printing Office between 1855 and 1861. Other Möllhausen views appeared in Ives's Report Upon the Colorado River of the West, issued in 1861, including the first graphic depiction of the Grand Canyon.

Nine paintings and twenty-four drawings, ten of which were reproduced in Whipple's report, are preserved today at the Oklahoma Historical Society in Oklahoma City, along with drawings by Albert H. Campbell and John C. Tidball, who also accompanied the Whipple survey. Thirty-three watercolors and a sketchbook of approximately one hundred drawings deposited with the Staatliches Museum fur Volkerkunde in Berlin were destroyed during World War II.

Möllhausen became a prolific writer in his later years, producing numerous articles and books on the subject of the American West. He issued an illustrated account of his travels with Ives in 1858. In 1861 he published a novel in four parts based on his Western adventures. He died in Berlin, Germany, on May 28, 1905.

Grant Foreman, ed., A Pathfinder in the Southwest (Norman: University of Oklahoma Press, 1941).

The following (as per The Chicago Manual of Style, 17th edition) is the preferred citation for articles:
David C. Hunt, “Möllhausen, Heinrich Balduin,” The Encyclopedia of Oklahoma History and Culture, https://www.okhistory.org/publications/enc/entry.php?entry=MO006.