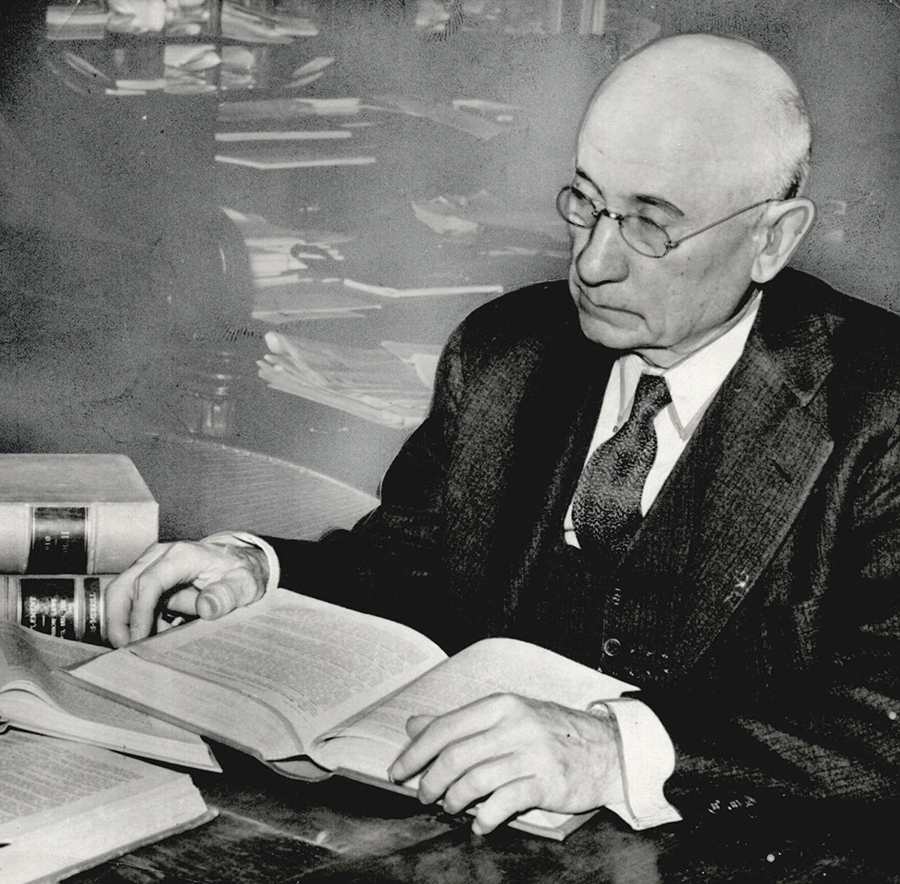 Founder of the University of Oklahoma College of Law, Julien Charles Monnet, born on October 4, 1868, in Keosauqua, Iowa, was the son of John and Eleonore Pernot Monnet. Educated in public schools, by 1905 Monnet had earned a bachelor's degree, a bachelor of laws degree, and a master's degree from the State University of Iowa. After practicing law in North Dakota and Iowa, he devoted himself to teaching law. In 1908 Harvard University Law School awarded him a second law degree.

Following a year as professor at the George Washington University Law School, Monnet accepted a proposal from the University of Oklahoma to organize a law school and to serve as its dean. Agreeing to come to Oklahoma, he asked for a free hand in choosing faculty and in administering the school. Throughout his thirty-two-year tenure as dean, he maintained this independence. Although Monnet was dismayed by the conditions of the Norman campus in 1909, he realized that this was one of the nation's last places in which a state university law school could be established from the ground up. In his first speech to the Oklahoma Bar Association, he told his peers that he would set up a full three-year program at once, rather than beginning with one year and adding a new class each year. Sixty students enrolled the first year, and twenty-one graduated in 1912.

Limited campus space led Monnet to hold classes in less than ideal quarters. Law students attended class in the university museum, formerly used for geology exhibits. Law school enrollment grew, but the university's administration hesitated to invest in separate facilities for the program. Therefore, law students actively lobbied the state legislature for building funds. Their efforts were aided by Monnet's appointment as acting university president in 1911–12. By 1913 the law school moved into the unfinished law building. The following year the building was dedicated and named Monnet Hall. Throughout his years at the University of Oklahoma Monnet was ably assisted by his well-educated wife, Helen Dubois Orton, whom he had married on May 16, 1894. They had three children. The Monnets were known as gracious hosts who enjoyed entertaining university faculty members at formal dinner parties. When Monnet retired in 1941, the Dean, as he was fondly called, had skillfully guided the school's growth from sixty to nearly three hundred students and had handed out more than fifteen hundred degrees. He was inducted into the Oklahoma Hall of Fame in 1941.

During retirement Monnet continued to be interested in the law school. Despite failing eyesight, he enjoyed outdoor activity. On Easter Sunday, 1951, he walked to Monnet Hall to view construction of an addition to the building. He fell into a hole at the site and broke his hip. Monnet died on April 7, 1951, in an Oklahoma City hospital.

The following (as per The Chicago Manual of Style, 17th edition) is the preferred citation for articles:
Carolyn G. Hanneman, “Monnet, Julien Charles,” The Encyclopedia of Oklahoma History and Culture, https://www.okhistory.org/publications/enc/entry.php?entry=MO008.