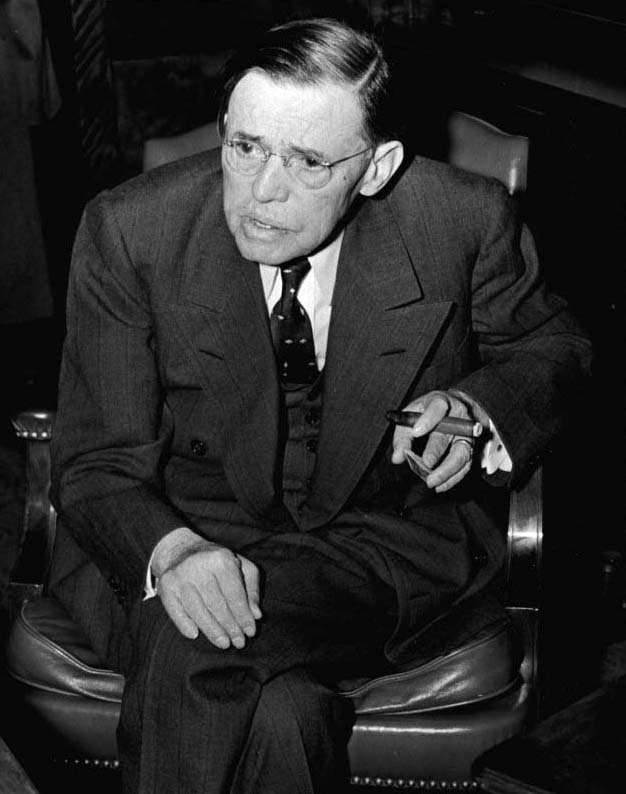 Born on November 19, 1871, on a farm in Nodaway County, Missouri, U.S. Sen. Edward Hall Moore was the son of John Hall and Cloey Broadrick Moore. Following his education in the Barnard, Missouri, public schools, Moore attended the Chillicothe (Missouri) Normal School, graduating in 1892. He then spent the next few years teaching school. Because he enjoyed making and listening to speeches, the young educator decided to attend the Kansas City School of Law and graduated with an LL.B. in 1900.

Admitted to the Missouri bar in 1901, he practiced in his home state only a brief time before moving to Okmulgee, Indian Territory. Shortly afterward, he became city attorney. Later he formed a law partnership with Edgar T. Noble, an old friend. In 1905 he returned to Missouri to marry Cora McComb, whom he had met at Chillicothe. The Moores had no children.

During this time a frugal Moore began to invest in real estate, including the nucleus of what would become a ten-thousand-acre cattle ranch. By 1919 he had tired of the law and dissolved the business to enter a different venture—oil. Truly a wildcatter in this new endeavor, he celebrated his first strike in the Holmes Field in Okfuskee County, Oklahoma. As president of the Independent Oil & Gas Company he expanded his business to Kansas and Texas. By the time he sold his holdings to Phillips Petroleum in 1930, the value of the company was estimated to be between $25 million and $40 million. In 1932 he formed E. H. Moore, Inc., yet another oil business. The company drilled more than four hundred wells in Oklahoma, Kansas, Texas, and California before he sold it in 1941. Two years later he sold his massive cattle operation.

A wealthy man, Moore enjoyed helping others. A member of the First Christian Church of Tulsa, he was said to have given more to Oklahoma churches than any other political figure. He also helped many young people pursue their education. He was a member of the Masonic order, the American, Oklahoma, and Tulsa bar associations, the Mid-Continent Oil and Gas Association, the Independent Petroleum Association, and the American Petroleum Institute.

Although a Democrat, he had become increasingly disillusioned with the party's New Deal policies in the late 1930s. In 1940 he believed that Franklin D. Roosevelt should not run for a third term. When the Democrats nominated FDR, Moore campaigned for Republican candidate Wendell Willkie. By 1942 lifelong-Democrat Moore switched to the Republican Party. That year, the Oklahoma Republican Party had suffered the loss of nominee W. B. Pine, who died shortly after the primary. The Republicans knew they had an uphill battle ahead of them in the race against Josh Lee, the popular Democrat incumbent. When the "dark horse" Moore was suggested as the nominee, the party quickly agreed. He not only wanted an end to the New Deal, he had the money to finance his campaign. Although Oklahoma had not elected a Republican senator since 1924, Moore won the election.

Although Oklahoma's junior senator at first asked to be seated on the Democratic side of the Senate chamber, his loyalty was Republican. While in the Senate, he served on several committees, including Indian Affairs, Interstate and Foreign Commerce, Judiciary, Pensions, Privileges and Elections, and Post Offices and Post Roads. He supported all purely military legislation, including unprecedented wartime appropriations. In the postwar era he was more internationalist than many of his fellow Republicans. On domestic issues he was 100 percent anti–New Deal and opposed all spending for public improvements, including projects slated for Oklahoma. While he opposed subsidies to special interests, he supported programs favorable to the oil industry. Although no important legislation carried his name, he won acclaim for his stand against the Democratic administration.

In 1948 Moore announced that he would not seek reelection, and he retired to Oklahoma. That same year he was inducted into the Oklahoma Hall of Fame and was described as a "statesman and philanthropist." He died on September 2, 1950, in Tulsa and was interred in Okmulgee Cemetery.

The following (as per The Chicago Manual of Style, 17th edition) is the preferred citation for articles:
Carolyn G. Hanneman, “Moore, Edward Hall,” The Encyclopedia of Oklahoma History and Culture, https://www.okhistory.org/publications/enc/entry.php?entry=MO015.