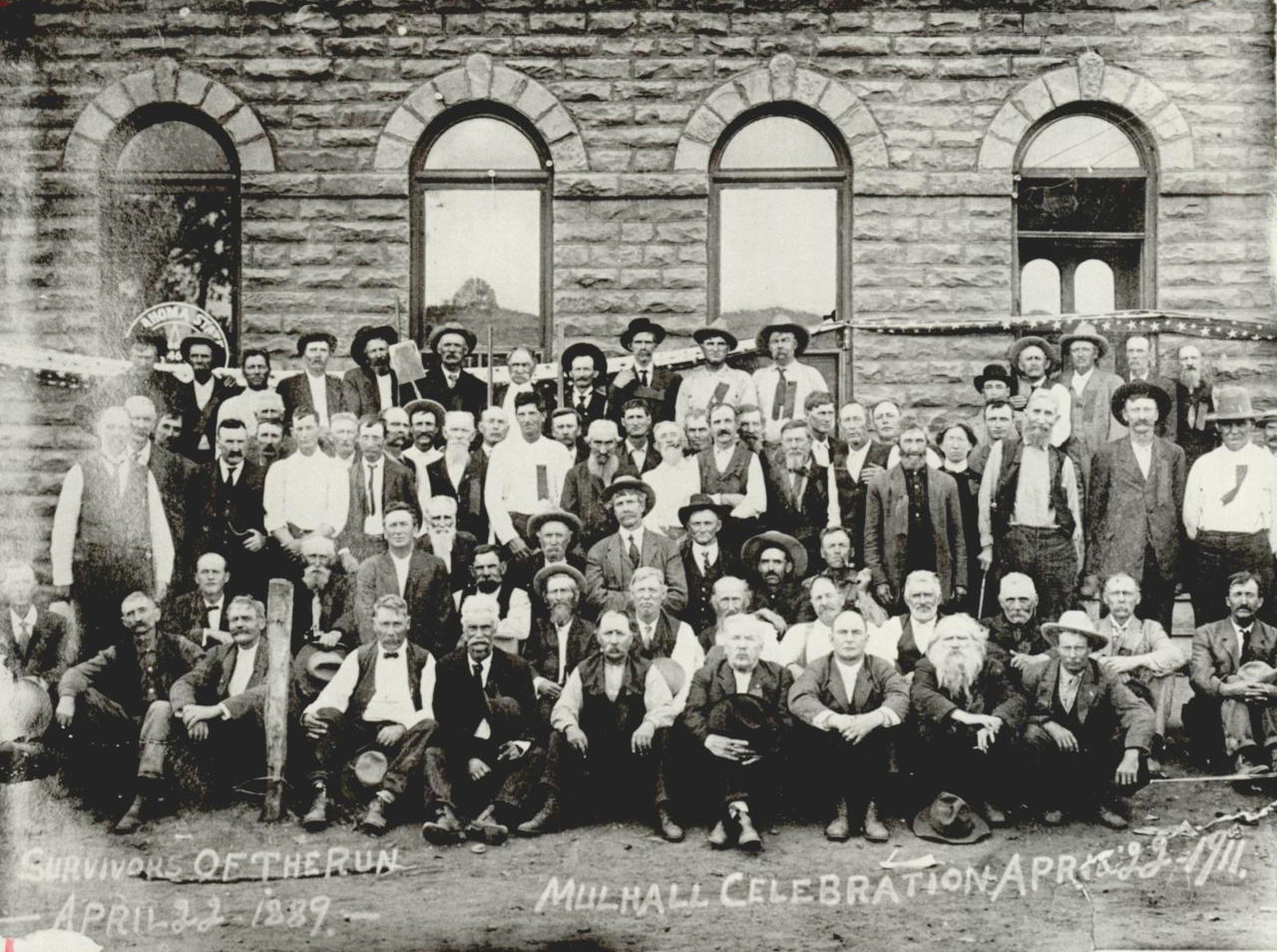 Situated in central Logan County thirteen miles north of Guthrie, Mulhall is named for Zack Mulhall (1847–1931), railway livestock agent, rancher, and famed Wild West show proprietor. He established a ranch there after claiming land in the Land Run of 1889. East of his claim and on a tributary of the Cimarron River, a settlement soon coalesced around an Atchison, Topeka and Santa Fe Railway water station called Beaver Creek, or Alfred, from which he and others had made the run. A town developed on eighty acres belonging to Sam Matthews and J. J. Cummings.

Alfred, which was possibly named for the son of railroad lawyer Henry Asp, soon had typical businesses, including W. A. Baty's lumberyard, Elmer Baker's hardware, and E. W. and Sheldon Harris's grocery. A town council took office in May 1889 with W. A. Baty as mayor. Zack Mulhall became mayor in April 1890, and in June the railroad acknowledged a citizens' petition and renamed the town after him. The postal designation was also changed. Mulhall was platted in March 1891, enabling property owners to get legal titles.

Mulhall had many amenities. Early-twentieth-century newspapers included the Monitor, the Chief, the Enterprise, and the State Journal. By 1902 Presbyterian, Methodist, Christian, and Catholic churches and one school existed, as did a Masonic lodge from 1890 and an Odd Fellows lodge from 1893. Telephone service appeared in 1903 and electric service in 1916. Two banks, feed and seed stores, a roller mill, a grain elevator, two cotton gins, and a broom factory developed, because area farmers derived income from crops of corn, wheat, cotton, castor beans, and fruit, as well as hogs, cattle, and poultry. The post–World War I agricultural depression negatively impacted agribusiness, so that by 1920 only an implement dealer, an elevator, a gin, and a feed store operated. From the 1920s an annual community fair provided entertainment and allowed farmers to exhibit their year's successes.

The 1900 census registered 564 residents and the 1907 census, 443. The number dropped to 441 in 1910, declined further, but rebounded to 406 in 1940. The number of businesses dwindled as nearby Guthrie and Oklahoma City continued to draw people away. A recovery to 301 in 1980 was reduced to 199 in 1990. In the 1980s a farmers' co-op exchange, three churches, a school, a bank, a grocery, a café, an implement dealer, and a gas station survived, and the Crossroads Chronicle newspaper operated. Correspondingly, Mulhall's school, established circa 1890, lost students and consolidated with Orlando's school district in 1969.

After fires in 1909, 1917, and 1921 that destroyed parts of the business district, Mulhall survived a major weather disaster. A massive tornado on May 3, 1999, leveled 80 percent of the buildings, including three churches, the school, the youth center, many homes, the town's grocery store, the water tower, and grain elevators. Rebuilding efforts included a water tower and a community center in 1999 and a new elementary school in 2001.

In 2000 U.S. Highway 77, which had reached the town in 1919, still served Mulhall's 239 residents. The Burlington Northern–Santa Fe rail line continued to traverse the town, but the depot closed in 1968. More than 85 percent of residents commuted to work in other places. The 2010 census counted a population of 225.

The following (as per The Chicago Manual of Style, 17th edition) is the preferred citation for articles:
Dianna Everett, “Mulhall,” The Encyclopedia of Oklahoma History and Culture, https://www.okhistory.org/publications/enc/entry.php?entry=MU005.