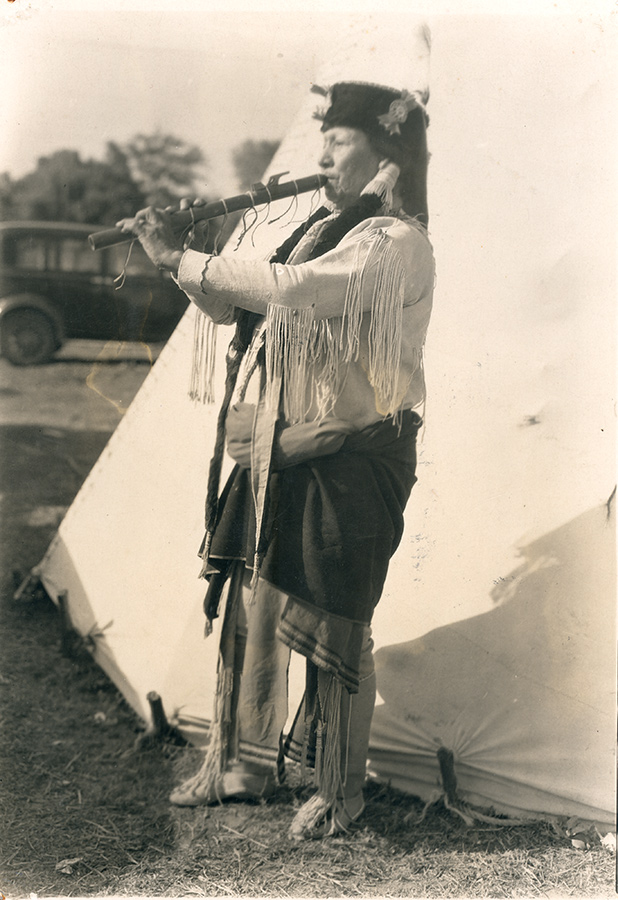 Powwows, hand games, churches, and stomp dances are only a few places and events where American Indian music comes alive in Oklahoma. Here, as in many states with large Indian populations, music is both incredibly diverse and incredibly important for the maintenance of local traditions. Music permeates almost every aspect of Oklahoma's Native cultures and is constantly shaping and reshaping Native life.

Many of these song traditions are intertribal and are exchanged between and among many Native communities in Oklahoma. Exemplary are the Native American Church peyote songs and the intertribal powwow songs. Other song traditions are widespread, such as Protestant Indian hymns, and obviously share a common history, yet they are distinguished from one another by their particular pasts, innovations, sound, and (perhaps most importantly) their differences in language content. Exemplary is the contrast between Cherokee and Comanche hymns. In addition to this, certain song traditions dominate in certain parts of the state. For example, in eastern Oklahoma, where tribes originally hailed from the southeastern United States, the stomp dance, which was originally associated with many of the Eastern tribes, and its songs maintain a high level of visibility.

It is important to realize that all human music is in a constant state of flux and change. American Indian music, like all music, participates in this process. Newer Oklahoma traditions include the composition of traditional songs with English lyrics (such as in the Oklahoma "two-step" performed at powwows all over the state), the improvisation and merging of Indian themes with American popular music (such as that presented by Anadarko's blues group, "Blues Nation"), and all-Indian fiddle contests (such as the event held each year in Tahlequah).

Given this, however, many in Oklahoma's Native America often consider musical traditions with historical antecedents among the most vital expressions for maintaining tribal culture, second only to language. Traditional music is not just musical "sound," it is a powerful way to engage and reengage tribal heritage and memory. As a medium for the oral transmission of history, as a means of celebration, and as a spiritual exercise, music, like language, gives a people its identity. With this in mind, in the late twentieth century many elderly song leaders turned their attention toward preserving song for future generations. While song and its purposes are always changing, with new songs regularly being composed within long-established traditional genres, for many of these song leaders the preservation work has come to comprise a significant part of the life of traditional American Indian music in Oklahoma.

Importantly, Native song leaders thus contend that their preservation work is not just about sustaining the music itself. It is a means of maintaining a unique and rich cultural heritage. In turn, preservation continually helps to forge the larger and ever-diverse "soundscape" of Oklahoma.

Luke Eric Lassiter, "'From Here On, I Will Be Praying to You': Indian Churches, Kiowa Hymns, and Native American Christianity in Southwestern Oklahoma," Ethno-musicology 45 (2001).

The following (as per The Chicago Manual of Style, 17th edition) is the preferred citation for articles:
Luke Eric Lassiter, “Music, American Indian,” The Encyclopedia of Oklahoma History and Culture, https://www.okhistory.org/publications/enc/entry.php?entry=MU017.