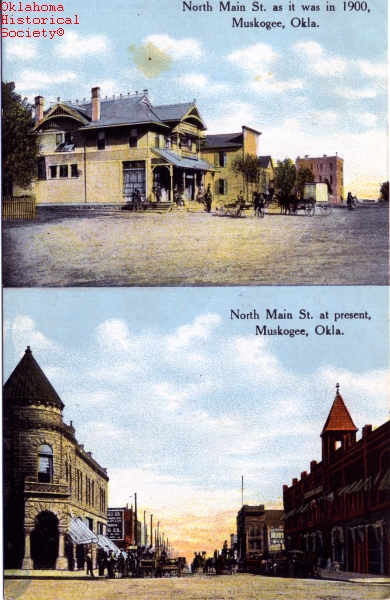 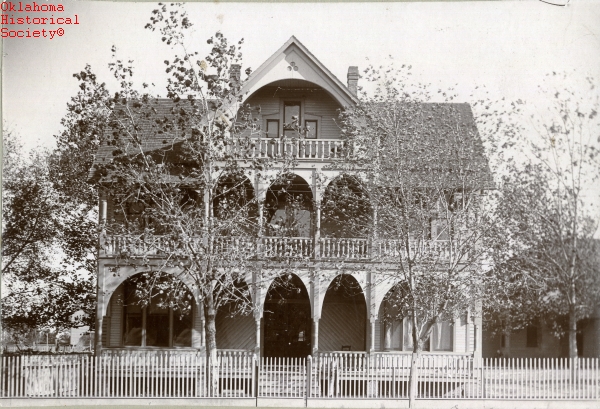 Muskogee is situated in eastern Oklahoma, fifty miles southeast of Tulsa on the Muskogee Turnpike and at the intersection of U.S. Highways 62, 64, and 69. Now the county seat of Muskogee County, the city was established in January 1872 as a railroad station at the top of the grade for the Missouri, Kansas and Texas Railway, which ran beside the famous Texas Road. This road, running through Oklahoma to Texas, was traveled by hundreds of thousands of families and freighters. Muskogee incorporated part of the Texas Road into the town as Cherokee Street.

Muskogee, originally located solely in the Muscogee (Creek) Nation from which it took its name, was the only depot allowed by that nation (town boundaries have since expanded to include parts of the old Cherokee Nation). Railroad contractors obtained permission to erect a post office and called it Muscogee Station, a name the town carried for about twenty years. Thereafter, Muskogee came into use. The town incorporated on March 19, 1898. In 1900 the population stood at 4,254.

In 1874 U.S. Indian agencies for the Cherokee, Choctaw, Creek, Chickasaw, and Seminole tribes were consolidated into one office, the Union Agency, in Muskogee. This office was located west of town on a hill that became known as Agency Hill. From early fall 1874 Muskogee held annual Indian Fairs to promote interracial and intertribal harmony, education, agricultural improvement, and social progress. The impact of these fairs reached into adjacent states and tribes at the western edge of Indian Territory. Muskogee subsequently became the site of the annual Oklahoma Free State Fair, which continued the promotion of economic and cultural development for decades after 1907 statehood.

Muskogee also became the location on March 1, 1889, of the first federal district court established in Indian Territory. In 1894 the Dawes Commission located in Muskogee to administer the enrollment of members of the Five Tribes. Both undertakings resulted in a 1900 claim that Muskogee was the site of the largest concentration of federal employees outside of Washington, D.C. A regional office of the Bureau of Indian Affairs in Muskogee continued into the twenty-first century, administering the needs of American Indians in forty-one Oklahoma counties.

At 1907 statehood Muskogee was the second-largest town in Indian Territory, and within a decade the community had ten buildings of more than five stories. The population rose to 25,278 by 1910. African Americans, among the earliest settlers, learned that Muskogee offered excellent economic opportunities. Subsequently, along Second Street many African American businesses developed, including oil companies, restaurants, clothing stores, newspaper publishing, and real estate brokerages. In 1894 oil wells were drilled near Muskogee. Oil was first struck near the town's east side on October 30, 1896, at a depth of 1,200 feet. These wells led to the discovery and development of other fields in the state.

Indian Territory's first bank, organized in Muskogee on June 7, 1890, remained an independent institution until the end of the twentieth century. Three large fires interrupted Muskogee's early development. The first, which happened on March 27, 1887, destroyed most businesses. On February 26, 1894, a fire razed eight downtown establishments. A third fire, on February 23, 1899, destroyed twice as many buildings. The Muskogee Phoenix newspaper took its name following the first fire and continued to publish into the twenty-first century as a subsidiary of Gannett Company, Inc., as the Muskogee Daily Phoenix & Times-Democrat.

In 1898 Troops L and M were raised in Muskogee to join the Theodore Roosevelt's Rough Riders in the Spanish-American War. This enlistment presaged the establishment of the Oklahoma National Guard. Muskogee was the site of a constitutional convention held in August 1905. This convention resulted in the proposed State of Sequoyah, which was opposed by Pres. Theodore Roosevelt and the Congress. The meeting brought forth many future politicians, most notably Charles N. Haskell, the first governor of Oklahoma, and Robert Latham Owen, a Muskogee banker who became one of Oklahoma's first U.S. senators. In the 1921 Republican landslide Muskogee residents elected Alice M. Robertson to the U.S. House of Representatives, only the second woman to serve in Congress up to that time.

The community has been an agricultural, light industrial, transportation, and distribution center for east-central Oklahoma. Hatbox Field was established in 1921 as a U.S. Army and municipal airport. Flying ceased at the field in 1998. Aviation flights in balloons lifted off from Muskogee in early 1900s. Beginning in 1916 several national balloon races originated there. Freight may be shipped there by rail via the Union Pacific Railway or by barge to the Port of Muskogee, located at river mile 396 on the McClellan-Kerr Arkansas River Navigation System. Public recreational facilities are under development at the Three Forks Harbor, located near the confluence of the Arkansas, Grand, and Verdigris rivers. Davis Field has three jet-capable runways and is an all-weather, twenty-four-hour, lighted airport with a fixed-based operator.

Muskogee's population remained stable from 1920 (30,277) to 1940 (32,322) but thereafter grew. The censuses of 1950, 1970, and 1990 recorded 37,289, 37,331, and 37,708, respectively. With a multicultural population of 38,310 in 2000 and 39,223 in 2010, Muskogee serves as the county seat of Muskogee County. The city operates under a council-manager form of government. Annual events include the Azalea Festival in April and the Garden of Lights display in Honor Heights Park between Thanksgiving and New Year's Day. At the beginning of the twenty-first century a number of museums served Muskogee. These included the Ataloa Lodge Museum at Bacone College; the Five Civilized Tribes Museum and Center for Indian Territory, focusing on American Indian history and art; the Thomas-Foreman Home; the Three Rivers Museum, preserving the history of Muskogee and adjacent counties; the Muskogee War Memorial Park, home of the USS Batfish; and the Oklahoma Music Hall of Fame, honoring Oklahoma music and musicians. National Register of Historic Places listings in or near Muskogee include the John Thomas/Grant Foreman House (NR 73001565); the Railroad Exchange (NR 83002096), Escoe (NR 83002094), Surety (NR 86002156), and Manhattan (NR 83002095) buildings; the Pre-Statehood Commercial District (NR 83004210); Union Agency (NR 70000535); the United States Post Office and Courthouse (also known as the Federal Building and United States Court, NR 00000246); and the Muskogee County Courthouse (NR 84003173).

The following (as per The Chicago Manual of Style, 17th edition) is the preferred citation for articles:
Wallace F. Waits, Jr., “Muskogee,” The Encyclopedia of Oklahoma History and Culture, https://www.okhistory.org/publications/enc/entry.php?entry=MU018.