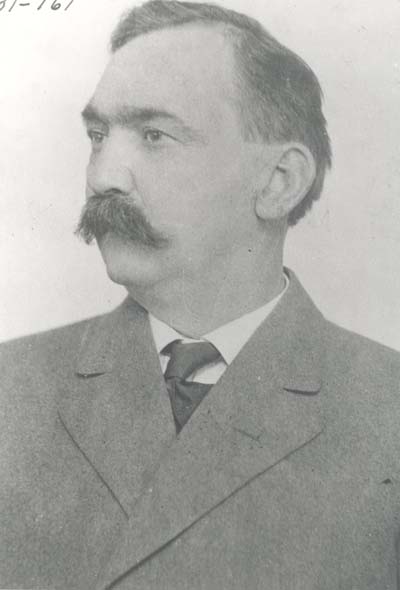 Lawyer and politician Patrick Sarsfield Nagle was the organizing genius behind the rise of the Oklahoma Socialist Party to its zenith of electoral success in the early twentieth century. He was also one of the central figures in fashioning Jack Walton's successful 1922 campaign for governor. Throughout his lifelong devotion to political activity, Nagle consistently stressed the necessity of ward-heeling politics to accomplish ideological objectives. These centered on three principal themes: advancing the interests of the underprivileged, supporting Irish nationalism, and defending Progressive Era election law reforms.

Nagle's parents, George and Mary Burke Nagle, emigrated from Ireland in the 1830s and eventually settled in a rural, southern Indiana community populated by Irish, Germans, and Catholics. At the time, the "Know Nothing" movement was at its peak. Consequently, following his birth on November 23, 1858, Patrick grew up in a firmly disciplined household that placed primary emphasis on devotion to the Roman Catholic faith, political allegiance to the Jacksonian Democratic Party, and the necessity for educational advancement. As Nagle reached age eighteen, his family moved west to northern Kansas, and he briefly contemplated a life in the priesthood as he and his brother Paul studied at St. Mary's Academy. However, any aspirations along this line came to an abrupt end after an altercation at a local skating rink resulted in Patrick's expulsion from the school.

The next two decades were highly eventful in Nagle's life. He won election as a Democrat to a county office, gained admission to the Kansas bar, made the Land Run of 1889 into the Oklahoma lands, opened a law office in Kingfisher, Oklahoma Territory, and totally immersed himself in Democratic Party activities. On September 10, 1894, he married Angie McCartney, of a prominent Kingfisher family, and his daily lifestyle became firmly established in a pattern that would remain constant for the remainder of his life. Although always active in politics, he made no "political" friendships, but confined all of his social life to his wife and two sons, the McCartney family, and a small handful of friends who shared his all-consuming interest in Shakespearean drama. Throughout his life and after his death he would be remembered by other Oklahoma politicians as a man whose abilities were widely respected, but who remained a "loner," unknown by those outside his immediate family and small circle of allies.

As a leading figure in the territorial Democratic Party, Nagle emerged as one of the most prominent advocates of its conservative Grover Cleveland wing. He often chaired party conventions and devoted his attention to platform writing and credentials committee assignments. While serving as U.S. marshal for the territory in 1896, he also became widely known as an unflinching opponent of populism and of the rapidly ascending Bryan wing of his own party.

In 1908, however, Nagle's career underwent a dramatic transformation. He left his conservative Democratic associates and assumed the unquestioned leadership of the state's rapidly expanding Socialist Party. In this new capacity he devoted himself to activities closely resembling those he had followed while leading the Democrats of territorial days. He closely supervised convention credentials, prepared much of the party's literature, drafted speeches, and accomplished organizational work. Other Socialists respected his wisdom and leadership. However, they also deeply resented his dictatorial methods, particularly his almost single-handed decision to dissolve the local party in order to thwart federal prosecution of national party leaders for opposing U.S. involvement in World War I.

By 1922 Nagle returned to politics, joining Oscar Ameringer and other Socialists in engineering Jack Walton's victory in the race for the governor's office. While Nagle subsequently served in the Walton administration in a rigorously reform-minded manner, he died on January 12, 1924, due to medical complications from exhaustion. His reputation for unswerving honesty remained completely untouched by any of the scandals normally associated with Walton's brief tenure in the governor's office.

The following (as per The Chicago Manual of Style, 17th edition) is the preferred citation for articles:
R. O. Joe Cassity, Jr., “Nagle, Patrick Sarsfield,” The Encyclopedia of Oklahoma History and Culture, https://www.okhistory.org/publications/enc/entry.php?entry=NA002.