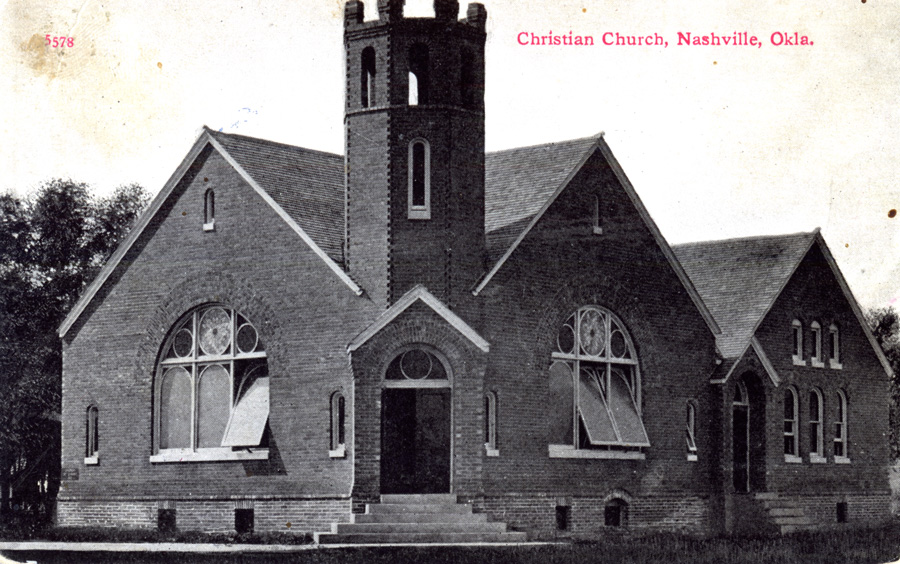 Located in southwestern Grant County, Nash is situated slightly east of the junction of State Highway 132 and U.S. Highway 64. The area was opened to non-Indian settlement during the Cherokee Outlet Opening on September 16, 1893. Approximately eighteen miles southwest of the county seat of Medford, the community was originally known as Nashville. A post office was designated on February 14, 1894. In honor of the first postmaster, Clark L. Nash, the post office was renamed Nash on March 23, 1911. On June 1, 1905, the Denver, Enid and Gulf Railroad (later the Atchison, Topeka and Santa Fe Railway) reached Nashville, along the line extending from Hillsdale (Garfield County) to Kiowa, Kansas.

The railroad brought prosperity to the agricultural town, which voters unanimously voted to incorporate on June 25, 1907. Early churches included the First Baptist, organized on May 11, 1901, and the Christian, established on April 25, 1909. The Methodist Episcopal congregation erected their church in 1904. By 1909 citizens supported the Bank of Nashville and the weekly newspaper, the Nashville News. Three grain elevators, a blacksmith, a livery, and a veterinary surgeon offered services to area farmers. Wheat was the principal export. Broomcorn was also grown, and a broom factory had been established by 1906. In 1918 Nash had a movie theater, an automobile dealer, and an auto repair shop. By the 1930s the town had a five-acre municipal park, and travelers, utilizing the railroad and the bus line, found accommodations at the hotel. Nine teachers were employed to teach 168 students. During the 1940s and 1950s the First National Bank and the Nash Rural Telephone Company served citizens. Other businesses included grocery stores, gasoline stations, a hardware store, a cooperative, and a blacksmith and welding shop.

At 1907 statehood Nashville had a population of 167. Numbers jumped to 348 and 439 in 1910 and 1920, respectively. During the next four decades the census reports indicated a decline from 412 in 1930 to 230 in 1960. In 1980 the town had 301 residents. In August 1982 Nash celebrated its seventy-fifth anniversary of incorporation. At that time the town boasted a bank, a café, a grocery store, a service station, and an elevator. At the turn of the twenty-first century Nash had 224 citizens. Eighteen percent of the population reported German ancestry. Ninety-eight percent of those employed commuted to work, and two percent walked to their work places. The census of 2010 counted a population of 204. The Bank of Nashville (Farmers and Merchants Bank) was listed in the National Register of Historic Places (NR 02000655).

The following (as per The Chicago Manual of Style, 17th edition) is the preferred citation for articles:
Linda D. Wilson, “Nash,” The Encyclopedia of Oklahoma History and Culture, https://www.okhistory.org/publications/enc/entry.php?entry=NA004.