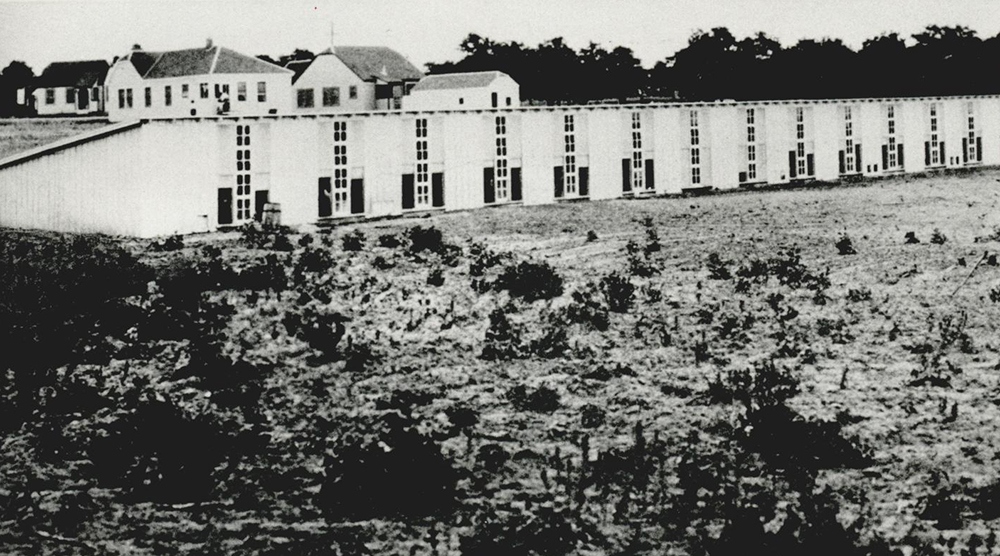 One of several suburban, incorporated towns in Oklahoma County and within the Oklahoma City metropolitan area, Nicoma Park was an agricultural community planned by the Oklahoma City Chamber of Commerce in 1925–27. Chamber staff and T. M. Jeffords, agricultural agent for the Missouri, Kansas and Texas Railway, studied similar projects around the nation. The chamber decided to bring the poultry industry to Oklahoma, and asked well-known builder-developer Gilbert A. Nichols to promote the colony. In 1928 he purchased a two-thousand-acre site on Twenty-third Street, ten miles due east of the Oklahoma Capitol Complex and outside the city limits. The name Nicoma combined the words Nichols and Oklahoma.

Somewhat utopian in concept, the purpose of Nicoma Park was to maintain a poultry colony where "modern homes on acreage tracts may be bought on the installment plan and paid for through the commercial production of high grade eggs, under the free supervision of an expert. The head of the family may continue to hold an eight-hour job and keep enough hens to meet all or most of the payments on the home." Lots ranged in size from one to five acres and could be purchased with a residence and a chicken house. The initial development was completed and the first lots sold on January 28, 1928. By June forty families lived in the colony, and seventy-five homes existed. Nichols touted Nicoma Park as an opportunity for family financial independence and as a safe, healthy place to raise children.

People from Oklahoma City bought lots in the colony, as did would-be chicken farmers from Arkansas and several midwestern states. By mid-1929 around one hundred colonists owned approximately fifty thousand egg-producing chickens, which were housed and fed on each individual's lot. The developer provided hatchery, brooder, and egg-processing facilities, and the growers formed a cooperative, Nicoma Park Egg Marketing Association. The Chicago, Rock Island and Pacific Railway, which ran east and west through the community, provided market access.

The stock market crash of October 1929 and the ensuing economic depression doomed the colony to failure as a cooperative enterprise. As the development company slipped toward receivership in 1931, several colonists who had lost their investments sued Nichols. In addition, a shipment of sick pullets infected the resident flocks with a disease that killed thousands.

Despite these serious setbacks the community remained generally intact and continued as a town whose economy was still in part based on the poultry business. Oil discoveries in the late 1920s and the 1930s provided jobs. By 1936 the population of approximately 750 supported two churches, a public school, and numerous businesses. In the 1940s a nearby federal air depot (now Tinker Air Force Base) and a General Motors Assembly Plant began providing additional employment. In 1946–47 Nichols auctioned the remaining one hundred lots. As late as 1951 at least one chicken farm remained in business.

Nicoma Park incorporated in August 1959. The 1960 census counted 1,263 residents, a number that doubled by 1970. Since 1980 the population has hovered around 2,400, with the 2000 count at 2,415. At the end of the twentieth century commercial development was average for a community of this size. The large Nicoma Park Lumber Yard, serving the Oklahoma City metropolitan area, provided much of Nicoma Park's tax revenue. The town comprised approximately 877 acres (3.269 square miles) generally along U.S. 62 (Twenty-third Street) from Post Road, on the west, to Hiwasee Road, on the east, and from Northeast Thirtieth south to Northeast Tenth. The community retained a spacious, park-like atmosphere. Children attended the Choctaw-Nicoma Park schools. More than 80 percent of residents worked in the surrounding metropolitan area in trades, sales, and production and at Tinker. They maintained a mayor-council form of government and continued to recall their history with an annual Founders' Day (formerly called the Poultry Festival) each spring. The 2010 census counted 2,393 inhabitants.

The following (as per The Chicago Manual of Style, 17th edition) is the preferred citation for articles:
Dianna Everett, “Nicoma Park,” The Encyclopedia of Oklahoma History and Culture, https://www.okhistory.org/publications/enc/entry.php?entry=NI006.