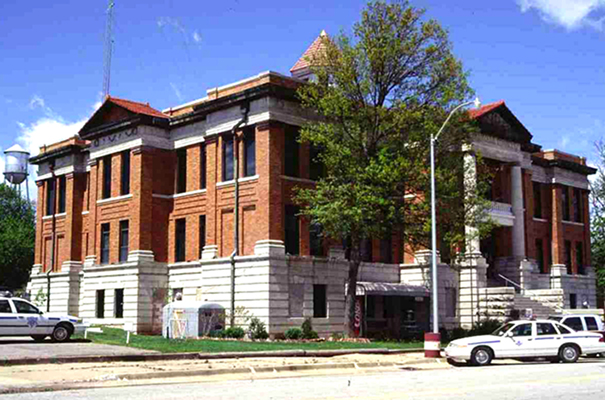 Nowata County is located in northeastern Oklahoma. Surrounding Oklahoma counties include Craig on the east, Rogers on the south, and Washington on the west. The Kansas counties of Montgomery and Labette border on the north. Archaeologists believe humans first occupied Nowata County some six centuries ago. Among the first inhabitants were prehistoric American Indians called the "Earth House People" and the "Cave and Ledge People." Three archaeological excavations, the Craig, Lawrence, and Lightning Creek sites, revealed much information about those people. Located in the Verdigris River valley, the sites date from between 1000 to 1500 B.C.

When white trappers and hunters arrived in northeastern Oklahoma, they encountered Indians primarily from the Quapaw and Osage tribes. When the United States acquired the region as part of the Louisiana Purchase in 1803, the land was accepted as Osage territory. However, an 1828 treaty with the Western Cherokee assigned the area to the Cherokee Nation. In 1856 the Cherokee National Council included present Nowata County in the newly created Cooweescoowee District. An 1867 Cherokee-Delaware treaty resulted in the establishment of Eastern Delaware settlements near present Delaware, Lenapah, and Nowata.

An important pre–Civil War community was Coody's Bluff. Located on the Verdigris River east of present Nowata, Coody's (Coodey's) Bluff was settled in the 1830s by a Cherokee named John Coody. Coody's Bluff became a staging area for Confederate forces early in the Civil War. Following the war the area experienced increased settlement, including whites. The new arrivals included Henry Armstrong and his wife, Lucy Jane Journeycake, in 1868. Lucy was the daughter of Delaware chief Charles Journeycake. Other settlers were members of the Chouteau family who emigrated from Kansas in 1871.

One of the county's earliest prestatehood communities was Metz, which was named for its postmaster, Fred Metzner. By 1889, when the Kansas and Arkansas Valley Railway (purchased by the St. Louis, Iron Mountain and Southern Railway in 1909) constructed a depot there, the name had been changed to Nowata, which is a derivative of the Delaware Indian word no-we-ata, meaning "come here" or "welcome." The railroad's misspelling of the word as "Nowata" eventually became the official town and county designation.

Nowata County was formally organized at statehood in 1907. At that time the town of Nowata became the county seat. Nowata County is comprised of 580.8 square miles of land and water area and is roughly divided into eastern and western halves by the Verdigris River, which runs south from Kansas into Rogers County. Most of the county's creeks empty into the Verdigris basin, except for the runoff in the extreme western portion, which drains into the Caney River. Within this part of the prairie-plains region of eastern Oklahoma, cattle raising and cultivating wheat, corn, oats, and sorghum are economically important. In addition, the county is known for its woodland belts, limestone and sandstone hills, limestone quarries, and petroleum and natural gas production. Nowata County is home to the Cherokee Shallow Sand District, one of the world's largest shallow oil fields.

The northern portion of Oologah Lake, which is part of the Verdigris River basin, is found in Nowata County. Oologah Lake emerged as the product of a U.S. Army Corps of Engineers flood control project completed in 1974. The adjacent wildlife management and wetlands area has provided the county with an outdoor recreational site.

Nowata County has produced several notable individuals. Eugene B. Lawson, a Nowata attorney, banker, and politician was a candidate for delegate to the 1906 Constitutional Convention and a Republican candidate for lieutenant governor. He later owned of one of Oklahoma's largest independent oil production companies. His wife, Roberta Campbell Lawson, 1935 president of the General Federation of Women's Clubs, was a granddaughter of Charles Journeycake. Walter Davis Humphrey, an attorney and four-time Democratic mayor of Nowata, was awarded a seat at the Constitutional Convention and was appointed to the Oklahoma Corporation Commission in 1915 and to the Oklahoma Tax Commission in 1931. Alluwe native Beth Campbell Short became a nationally known journalist. A reporter for the Daily Oklahoman, she joined the Associated Press's Washington bureau in 1936 and was appointed by Pres. Harry S. Truman as the White House's first woman correspondence secretary.

Several Nowata County properties have been listed in the National Register of Historic Places. The county courthouse in Nowata was included in 1984 (NR 84003375). Cemetery Patent 110 (NR 01000951) and the Diamond Point Dependent District Number Forty-Four School (NR 96000977) are also represented.

The following (as per The Chicago Manual of Style, 17th edition) is the preferred citation for articles:
Gary L. Cheatham, “Nowata County,” The Encyclopedia of Oklahoma History and Culture, https://www.okhistory.org/publications/enc/entry.php?entry=NO018.