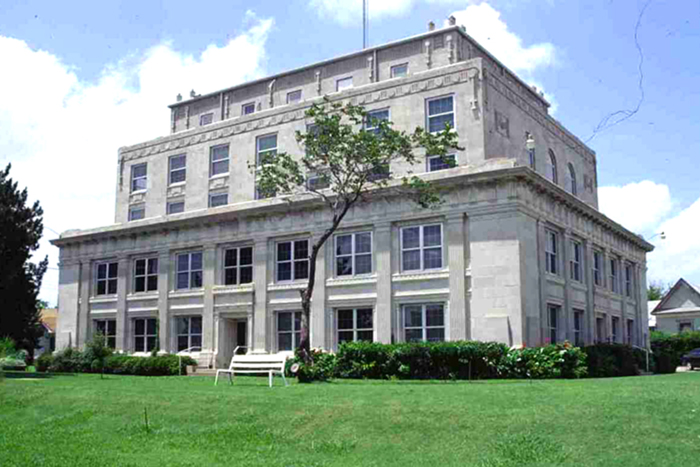 Located in east-central Oklahoma, Okfuskee County is bordered by Creek County on the north, Okmulgee and McIntosh counties on the east, Hughes and Seminole counties on the south, and Lincoln and Pottawatomie counties on the west. Organized at 1907 statehood, the county is named for a former Creek town in present Cleburne County, Alabama. In 2010 incorporated towns included Bearden, Boley, Castle, Clearview, IXL, Paden, Weleetka, and Okemah (the county seat). Formerly part of the Creek Nation, Indian Territory, Okfuskee County has 628.91 square miles of land and water. Lying within the Sandstone Hills physiographic region, the county is drained by the Deep Fork of the Canadian River in the northeastern corner and by the North Canadian River, which forms its southern boundary with Seminole County. Okfuskee County lies within a region that has been little studied by archaeologists. However, a 1983 published archaeological survey reported forty known sites, of which one has been tested.

Prior to the removal of the Creek from Alabama and Georgia to Indian Territory in the 1830s, this area was occupied by the Quapaw and Osage, who ceded the land to the United States in 1818 and 1825, respectively. In the 1830s the Creek established Greenleaf and Thlopthlocco tribal towns in the Deep Fork District of the Creek Nation, within the boundaries of present Okfuskee County. Thlopthlocco had a Methodist Episcopal church and was located approximately eight miles southeast of present Okemah. Greenleaf, a trade center with a school and a Baptist church, was situated about five miles northwest of Thlopthlocco.

Both towns were significant during the Civil War (1861–65). For a short time Thlopthlocco Town served as Confederate Col. Douglas H. Cooper's headquarters. At Greenleaf Town Creek leader Opothleyahola established a camp to meet with Creeks in hopes of retaining harmony among the factions that had split over the Civil War. He and approximately five thousand others traveled north to Kansas to avoid the conflict. In 1870 a Baptist church known as Thlewarle Mekko Sapkv Coko was built in the southeastern corner of the future county. Okfuskee, another Creek town, was the location of Samuel Checote's trading post and had a post office established on July 18, 1896.

Following the Civil War the Creek freed their slaves as part of the provisions of the Reconstruction Treaties of 1866. Consequently, African Americans remained in the area to farm and to establish All-Black towns such as Boley, Bookertee, Clearview, Chilesville, and Rusk. Several newspapers served the African American population, including the Clearview Tribune (1904), the Boley Progress (1905), and the Bookertee Searchlight (1919).

In addition to the petroleum industry Okfuskee County's economy has also been based on ranching and farming. In the early 1900s the county had one-fourth of its surface covered with timber, and one-half was under cultivation in the production of cotton, corn, oats, hay, sorghum, and potatoes. Located eleven miles north of Okemah, the Sowder Ranch was representative of the small subsistence ranches. Morris Franklin Sowder founded the ranch in 1905 and built a one-story house of native stone in 1913. He raised cattle, hogs, and horses and diversified with small-scale farming. During the 1920s Glen Dill had a ranch near Castle, and the Camp brothers, Sterling and Tom, owned a ranch three miles southwest of Okemah. Rancher O. J. Pharoah had a town named for him. Located nine miles east of Okemah, a post office was established in Pharoah on June 8, 1921, and the community continued as an unincorporated town in the twenty-first century. In 1935 Okfuskee County had 3,520 farms, of which 2,702 were operated by tenant farmers. In the late 1970s Okfuskee County ranked as one of the top-producing Oklahoma counties for peanuts and pecans. At the turn of the twenty-first century Okfuskee County had 677 farms, and the leading crops were wheat, corn, oats, and soybeans.

Before 1907 statehood education in Okfuskee County was limited to tribal schools, a few subscription schools, and some rural schools. Around the turn of the twentieth century rural schools first appeared in Tiger Flat, Okfuskee, Alabama, Tuskegee, Hickory Ridge, Paden, Bearden, and Mountain Grove. Between 1907 and 1909 twenty-six additional schools were established. In September 1909 the Okfuskee County High School opened in Paden, in the far western part of the county. The high school closed in July 1935 due to lack of funding. Postsecondary education was provided at the Creek-Seminole College in Boley and the Creek-Seminole Agricultural College, northeast of Clearview. The Okemah Junior College was established in 1933. At the turn of the twenty-first century the towns of Okemah, Boley, Weleetka, Mason, and Paden had primary and secondary schools.

Early transportation included two railroads. The St. Louis and San Francisco Railway built its line from north to south through Okfuskee County in 1901–03. The Fort Smith and Western Railroad laid their tracks from east to west in 1903. The railroads had a significant impact on the establishment of the towns of Boley, Clearview, and Paden. In 1930 the county had thirty-three miles of hard-surfaced roads. By the 1940s bus lines such as Greyhound, Denco Bus Company, Santa Fe Trailways, and the Union Transportation Company served county residents. At the turn of the twenty-first century motorists used Interstate 40, U.S. Highways 62 and 75, and State Highways 27, 48, 56, and 84.

The following (as per The Chicago Manual of Style, 17th edition) is the preferred citation for articles:
Linda D. Wilson, “Okfuskee County,” The Encyclopedia of Oklahoma History and Culture, https://www.okhistory.org/publications/enc/entry.php?entry=OK005.