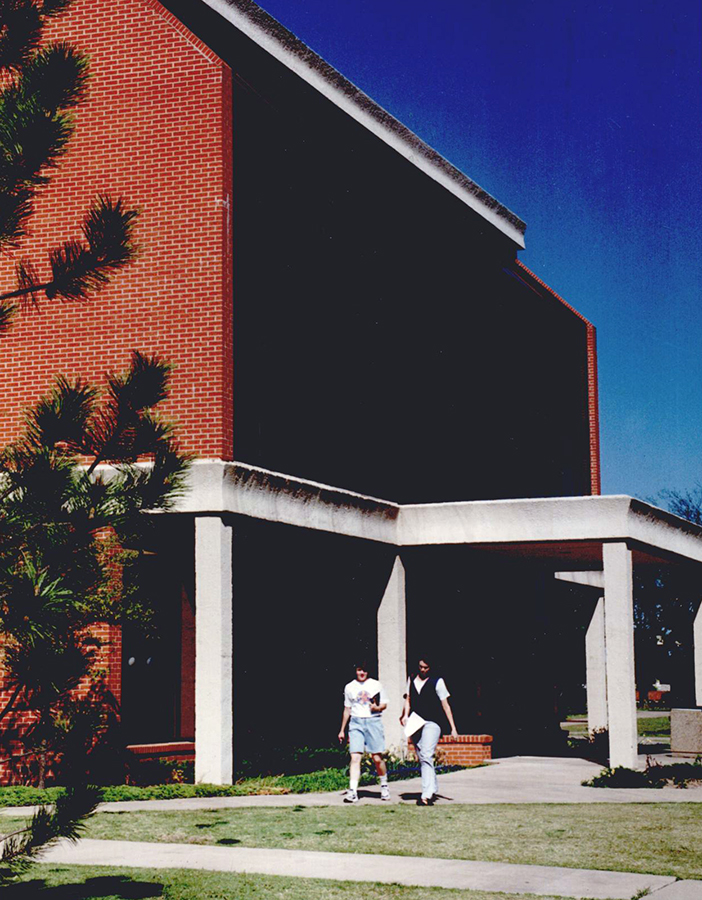 The year 1907 witnessed Oklahoma statehood and the creation of Cordell Christian College. A dream of the Churches of Christ members in Oklahoma, the school was organized by three Cordell business leaders, J. C. Harrel, G. A. W. Fleming, and W. D. Hockaday. It grew until pacifist sentiment among the faculty during World War I caused a drop in enrollment and financial support. Because the board of directors was concerned about threats of violence against the school's president, J. N. Armstrong, he decided to close the school in 1918. The facility resurfaced again in 1921 as Western Oklahoma Christian College. In 1925 it was renamed Oklahoma Christian College to symbolize statewide support for the institution. Unfortunately, it closed due to the Great Depression.

However, Churches of Christ members continued to pursue their dream of Christian higher education. In March 1947 they created a fact-finding committee to investigate the suitability of placing the campus on the site of a former government facility in Pryor. Considering the location unsatisfactory, the committee continued to seek a home for a Christian college. Mass meetings were held in Tulsa, Oklahoma City, and Wichita, Kansas. As a result, a board of directors was formed in July 1948 with G. R. Tinius as president, Rex Westerfield, vice president, Calvin Proctor, secretary, and J. D. Fine, treasurer.

The trustees decided to locate Central Christian College (CCC) on an oil millionaire's estate of 152 acres south of Bartlesville's city limits. CCC opened its doors in the fall 1950 as a junior college with L. R. Wilson as its first president, a faculty of eight, and an expected enrollment of one hundred. After five years the board of directors created a committee to study the merits of moving the school to a larger city to gain greater support. Oklahoma City church and business communities showed enthusiasm for hosting the institution. A campaign among Oklahoma City church members raised $100,000, and the Oklahoma City business community, led by Edward K. Gaylord, publisher of the Daily Oklahoman, and Dr. George S. Benson, president of Harding College, Searcy, Arkansas, raised $200,000 in pledges. This strong support from the capital city continued. Gaylord and his son, Edward L. Gaylord, were strong advocates of the school's conservative values. Led by its second president, James O. Baird, the college reopened in Oklahoma City in 1958.

Under Baird's leadership from 1954 to 1974 the institution changed its name to Oklahoma Christian College (OCC) in 1959, became a four-year college in 1961, and received full accreditation by the North Central Association in 1966. During Baird's twenty-year tenure OCC became a leader in the field of automated education with the opening of the Mabee Learning Center in 1965. Directed by Stafford North, the center pioneered the use of electronic media in teaching and received national attention. Also during this period the school achieved notice in the field of citizenship education. In 1966 the American Citizenship Center, a by-product of the Cold War, was established with three primary goals: to support the principle of constitutional government, to promote an appreciation of the private-enterprise economy, and to emphasize the preservation of personal freedom.

Baird retired in 1974, and J. Terry Johnson assumed the presidency. During his tenure the student body increased to more than sixteen hundred. The curriculum broadened to include an accredited engineering program, and international studies expanded with the creation of the Vienna Studies Program. OCC also continued its emphasis on citizenship education with the creation of Enterprise Square, a Disney-like museum designed to teach free enterprise. The school's endowment of more than $25 million allowed for an expanded liberal arts program and an enlarged faculty. To reflect the college's growth the name was changed to Oklahoma Christian University of Science and Arts (OCUSA) in 1990. Johnson retired in 1994 and was succeeded by Kevin Jacobs. After having opened Cascade College, a branch of OCUSA in Portland, Oregon, Jacobs returned to the Oklahoma City unit as president. Due to his keen interest in recruiting students, during his term enrollment increased and landscaping projects beautified the campus. In 1996 the name Oklahoma Christian University of Science and Arts was shortened to Oklahoma Christian University. In 2002 Mike O'Neal began his presidency after having completed twenty-six years in finance and development at Pepperdine University in Malibu, California. With significant financial expertise, he strengthened the relationship between the administration and the Board of Trustees and supervised a major housing addition.

In the twenty-first century the Oklahoma Christian University enrolled a total of approximately two thousand students on its Oklahoma City campus and at Cascade College in Oregon. The Oklahoma City facilities comprised thirty buildings and employed eighty-six full-time faculty. The four-year, private, coeducational university offered degree programs in the traditional liberal arts and sciences and in professional programs such as business, engineering, and education, with graduate programs in Bible and business.

Michael W. Casey, "The Closing of Cordell Christian College: A Microcosm of American Intolerance During World War I," The Chronicles of Oklahoma 76 (Spring 1998).

The following (as per The Chicago Manual of Style, 17th edition) is the preferred citation for articles:
John H. L. Thompson, “Oklahoma Christian University,” The Encyclopedia of Oklahoma History and Culture, https://www.okhistory.org/publications/enc/entry.php?entry=OK024.