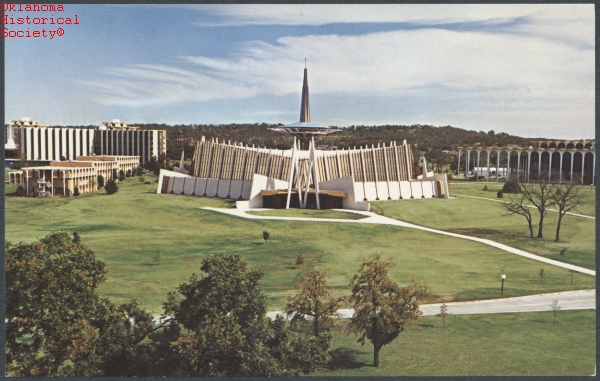 An evangelist, Oral Roberts founded Oral Roberts University (ORU) in 1962 in Tulsa. Born Granville Oral Roberts in Pontotoc County, Oklahoma, in 1918, he studied at Bible colleges and became a minister. In 1947 he began his career in evangelism and subsequently became an American Charismatic Christian evangelist. Chartered by the State of Oklahoma in 1963, ORU held its first classes in 1965. As a private, nonsectarian, liberal arts institution, it had an enrollment of 303 that year. At the time of its dedication on April 2, 1967, the university had eight completed buildings situated on a 420-acre campus. Rapid growth occurred in the 1970s. Enrollment reached one thousand in 1971, the year in which accreditation was given by the North Central Association of Colleges and Secondary Schools. The Mabee Center, housing performing arts facilities and an indoor sports arena, was completed in 1972. Other buildings constructed included residence halls, a worship center, a graduate center, and 190 apartments. ORU added a school of nursing in 1975 and schools of medicine and dentistry in 1978.

ORU continued to progress in the early 1980s. In 1980 fifty-four students enrolled in the law school, and by 1983 graduate degrees were also offered in business, education, and theology. By that time the campus comprised more than five hundred acres and twenty-two buildings, including City of Faith Medical and Research Center, which comprised a sixty-story clinic, a thirty-story hospital, and a twenty-story research facility, accommodating the medical and bioscience programs. However, a downturn in the economy and dwindling donations following television evangelism scandals in the late 1980s caused the school of dentistry to close, and the law school was transferred to CBN (Christian Broadcasting Network) University (now Regent University) in Virginia Beach, Virginia. In 1990 ORU's school of medicine closed, after having graduated 333 physicians.

ORU is noted for its futuristic architecture. A monumental, sixty-foot-tall, thirty-ton bronze sculpture depicting Praying Hands is a dominant image, stationed at the school's main entrance, the Avenue of Flags. The visual effect of massive columns used at the John D. Messick Learning Resource Center references King Solomon's Temple. The Prayer Tower, in the center of campus, is an abstraction combining a cross and a crown of thorns. The City of Faith's Tower stands at 648 feet in height and is said to be the state's second-tallest building.

The following (as per The Chicago Manual of Style, 17th edition) is the preferred citation for articles:
Linda D. Wilson, “Oral Roberts University,” The Encyclopedia of Oklahoma History and Culture, https://www.okhistory.org/publications/enc/entry.php?entry=OR001.