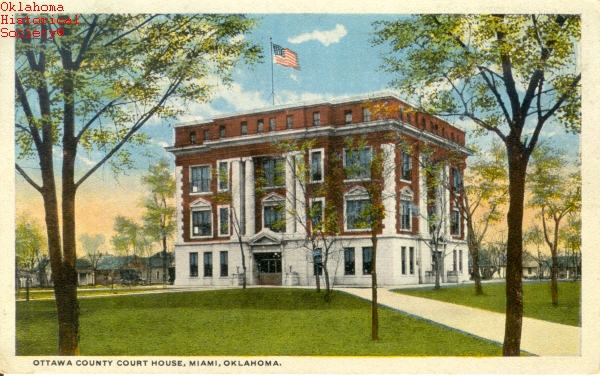 Located in Oklahoma's northeastern corner, Ottawa County contains 484.73 square miles of land and water. Created at 1907 statehood the county is bordered by Kansas on the north, Missouri on the east, Delaware County on the south, and Craig County on the west. The name honors the Ottawa tribe.

The environmental setting displays two separate characteristics, the Ozark Plateau and the Osage Plains. The Ozark Plateau of the eastern part of the county gives way to the plains west of the Neosho River. The plains region here has also been classified as the Neosho Lowlands. The Neosho (Grand) and Spring rivers once merged in the county, but they now drain into the Lake O' the Cherokees, known as Grand Lake, impounded in 1940.

Most of the archaeological work relating to the Paleo-Indian period in Ottawa County has involved surface collection. William H. Holmes conducted two early, professional archaeological examinations here. In 1894 he investigated a chert quarry near Peoria, and in 1901 he surveyed a marsh known as Sulphur Springs near Afton, finding spear and arrow points, tools, and knives associated with mammoth and mastodon teeth. At the beginning of the twentieth century there were eight Archaic sites (6000 B.C. to A.D. 1), sixteen Woodland sites (A.D. 1 to 1000), and six Plains Village sites (A.D. 1000 to 1500).

After the Osage ceded their claim to the area, in 1828 the Western Cherokees acquired the region by ceding their Arkansas lands to the United States. Beginning in 1831 the federal government began to reacquire part of the land lying in present Ottawa County in order to relocate smaller tribes. The first such treaty between the Seneca living on the Sandusky River in Ohio and the federal government was concluded on February 28, 1831. A few months later the United States made an agreement with another Seneca band and the Shawnee of Ohio. Both of these treaties contained a clause promising a sawmill and blacksmith shop. In 1833 a treaty with Quapaw assigned them 150 sections of land near the Seneca. In 1867 the federal government purchased land from the Seneca/Shawnee and the Quapaw to relocate several tribes then residing in Kansas. These included the Peoria, Kaskaskias, Weas, Piankeshaws, Miami, Ottawa, and Wyandotte. After the Modoc War (1872–73) 153 Moduc were placed on the Quapaw Reservation.

From 1838 to 1871 the Neosho Agency administered these tribes' affairs, operating from several different locations over time. From 1851 through 1861 it occupied the Crawford Seminary, founded in 1843 near the present site of Peoria by the Methodist Episcopal Church as a school for Quapaw children east of Spring River. In 1848 the school had moved several miles north to a healthier environment, and it closed in 1852. Moved to Fort Scott, Kansas, during the Civil War, the Neosho Agency reopened in 1865 under Special Indian Agent George Mitchell in present Ottawa County and in July 1871 became the Quapaw Agency, serving only the tribes located in northeastern Indian Territory (beginning in 1849 several Indian nations then located in Kansas had been placed under the Neosho Agency, and the official Neosho agent lived there after the Civil War).

In 1869 the Society of Friends (Quakers) established a mission for the Wyandotte. It evolved into a boarding school for Seneca, Wyandotte, and Shawnee children, with classes initiated in 1872. Over the years the school was known by several names, including the Wyandotte Mission, Seneca Indian School, Seneca, Shawnee, and Wyandotte Industrial Boarding School, and Seneca Boarding School. In 1870 a school opened for the Ottawa, in 1871 a school for the Peoria was established north of the reservations in Baxter Springs, Kansas, and in 1871 a boarding school for the Quapaw and Modoc was founded. From 1894 until 1927 St. Mary's of the Quapaw, a Catholic facility, served that tribe. By the late 1890s most of the Quapaw Agency's charges had taken allotments.

Although lead and zinc mining occurred in the Missouri portion of the Tri-State Lead and Zinc District (southwestern Missouri, southeastern Kansas, and northeastern Oklahoma) as early as the 1850s, mining began in present Ottawa County near Peoria in 1891. Soon numerous mining camps emerged, including Picher, Lincolnville, Hattonville (later Commerce), Century, and Cardin. The industry also led to instant growth in preexisting towns, such as Miami and Quapaw. The Quapaw tribe initially held the rights to most of the land that produced the valuable ore. By the 1910s companies began to buy, rather than lease the land, and as a result, a few large corporations monopolized the lead and zinc fields. These included the Commerce Mining and Royalty Company, the Eagle-Picher Company, the Childers Mining Company, the LaClede Lead and Zinc Company, and the American Lead and Zinc Company. Several smelters also operated, heat-refining the ore into a marketable product.

In 1926, at the region's height of production, Ottawa County stood as the largest source of lead and zinc in the world. By the 1960s most of the mines had closed, leaving mine shafts, sinkholes, chat piles, and other dangers for the next generation. By 2000 the Tar Creek Superfund Site, a federally funded clean-up project, centered on Picher and encompassed most of the former lead and zinc production centers. Limestone, timber, and tripoli have also been extracted in Ottawa County. In 1912 tripoli, primarily used as an abrasive, was found near Peoria and continued to be mined into the twenty-first century, with 29,277 tons produced in 2002.

Transportation routes had emerged in the area by the early 1800s. The Texas Road and later two branches of the Shawnee Trail, which followed the Grand River from Fort Gibson, traversed present Ottawa County, connecting Texas to Kansas. In 1871 the Atlantic and Pacific Railroad, acquired in 1876 by the St. Louis and San Francisco Railway, laid tracks through the area southwesterly to Vinita. In 1901 the Kansas City, Fort Scott and Memphis Railway, leased to the St. Louis and San Francisco Railway that same year, built from the Kansas border to Afton. In 1906–07 the Southwest Missouri Railroad built an interurban line from Baxter Springs, Kansas, to Picher to haul lead and zinc. In 1908–09 the Oklahoma, Kansas and Missouri Inter-Urban Railway constructed a line from Miami to Commerce to also service the mining industry, completing another branch in 1916 from Commerce to Century. In 1919 the Northeast Oklahoma Railroad purchased the Oklahoma, Kansas and Missouri and in 1939 bought the Southwest Missouri Railroad. In 1912–13 the Missouri, Oklahoma and Gulf Railroad, eventually sold to the Kansas, Oklahoma and Gulf Railway, laid rails from the Kansas-Oklahoma line south through Ottawa County to Wagoner.

In the first half of the twentieth century many of the county's businesses catered to the lead and zinc industry. These included machine shops, drilling companies, iron and metal supply companies, welding outfits, and a number of retail entities serving the miners. The chat, or rock fragmented waste, from the lead and zinc mines could be used as aggregate for road construction and concrete production, and a trucking industry developed to haul it. In 2002 the Flint Rock Products company utilized 588,429 tons of chat. In 1945 a B. F. Goodrich tire manufacturing plant opened northwest of Miami, providing jobs and boosting the county's sagging economy as lead and zinc production declined. On August 23, 1985, known in the region as "Black Friday," Goodrich announced the plant's closing.

The following (as per The Chicago Manual of Style, 17th edition) is the preferred citation for articles:
Larry O'Dell, “Ottawa County,” The Encyclopedia of Oklahoma History and Culture, https://www.okhistory.org/publications/enc/entry.php?entry=OT003.