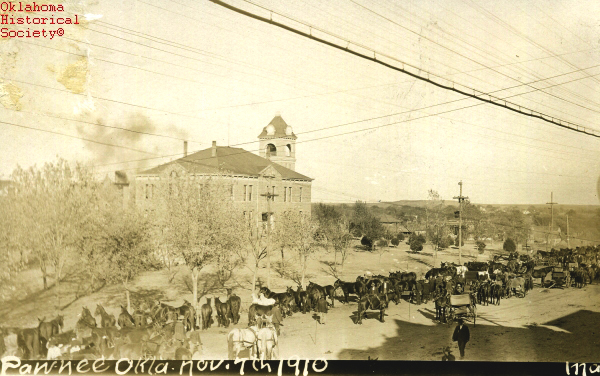 Pawnee, the county seat of Pawnee County, is situated at the junction of State Highway 18 and U.S. Highway 64. The town was named for the Pawnee tribe, who were relocated from Nebraska to Indian Territory between 1873 and 1875. They were settled on a reservation near the present townsite. Subsequently, the Pawnee Agency and the Pawnee Boarding School were established. The Pawnee Agency received a post office designation on May 4, 1876. After the Pawnee took allotments, the area was opened to non-Indian settlers on September 16, 1893, during the Cherokee Outlet Opening. Prior to the opening Townsite Number Thirteen (later Pawnee) had been designated as the temporary county seat. The post office was redesignated from Pawnee Agency to Pawnee on October 26, 1893. The town incorporated on April 16, 1894. On September 9, 1895, the townspeople dedicated a county courthouse. When Pawnee had a population exceeding 2,000, its citizens voted in favor of becoming a "city of the first class" on May 12, 1908. Six days later Gov. Charles N. Haskell signed a proclamation declaring it official.

Between 1900 and 1902 the Eastern Oklahoma Railway (later the Atchison, Topeka and Santa Fe Railway) built a line, connecting Ripley with Esau Junction that passed through Pawnee. The Arkansas Valley and Western Railway (later the St. Louis and San Francisco Railway) came through Pawnee from east to west in 1902. Pawnee developed as an agricultural trade center. By 1909 four blacksmiths, three cotton gins, a grain elevator, and a creamery supported the local farmers. Outbound shipments included cotton, grain, broomcorn, livestock, and produce. Pawnee boasted three banks, including the Arkansas Valley National Bank (listed in the National Register of Historic Places, NR 78002256). An opera house offered entertainment, and the Courier-Dispatch and the Times-Democrat provided news. In the early 1930s two cotton gins and one elevator continued in operation. By the mid-1940s the town had two banks, two hospitals, four school buildings, five churches, and a weekly newspaper, the Pawnee Chief.

Despite the Great Depression, Pawnee continued to grow and improve. During the 1930s Works Progress Administration projects included the construction of the Pawnee National Guard Armory (NR 94000486) and the Pawnee Municipal Swimming Pool and Bathhouse (NR 03000873). Also at that time Gordon W. "Pawnee Bill" Lillie's Old Town and Indian Trading Post served as a popular tourist attraction. Beginning on January 15, 1931, a government hospital provided medical care for the Ponca, Pawnee, Kaw, Otoe, and Tonkawa. In September 1932 a new school building opened at the Pawnee Agency. That year a 305-acre water reservoir, known as Pawnee Lake, was completed. A new county courthouse (NR 84003406), replacing the one erected in 1895, was constructed in 1932. Smith and Senter of Tulsa were the architects, and the Manhattan Construction Company of Tulsa built the edifice. County officials moved to the new building that cost approximately $125,000 in December 1932. Between 1935 and 1938 the Pawnee Junior College provided higher education.

The following (as per The Chicago Manual of Style, 17th edition) is the preferred citation for articles:
Linda D. Wilson, “Pawnee (town),” The Encyclopedia of Oklahoma History and Culture, https://www.okhistory.org/publications/enc/entry.php?entry=PA023.