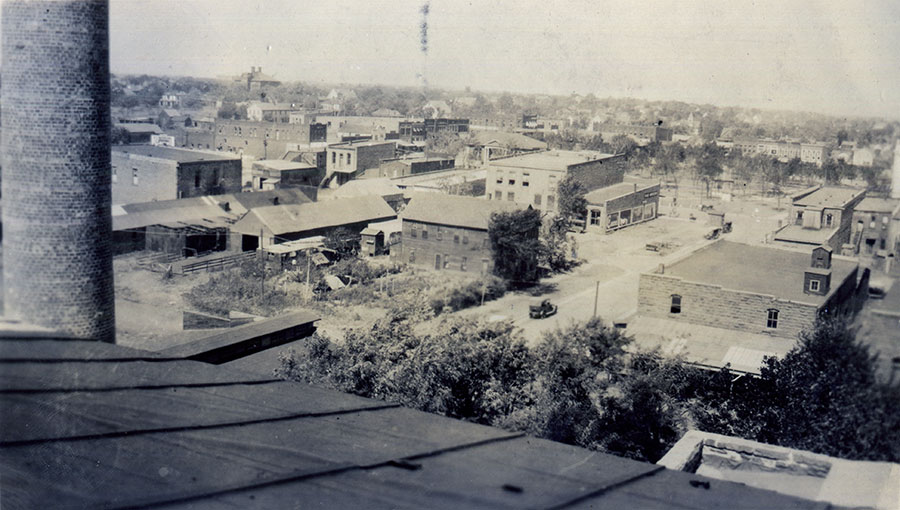 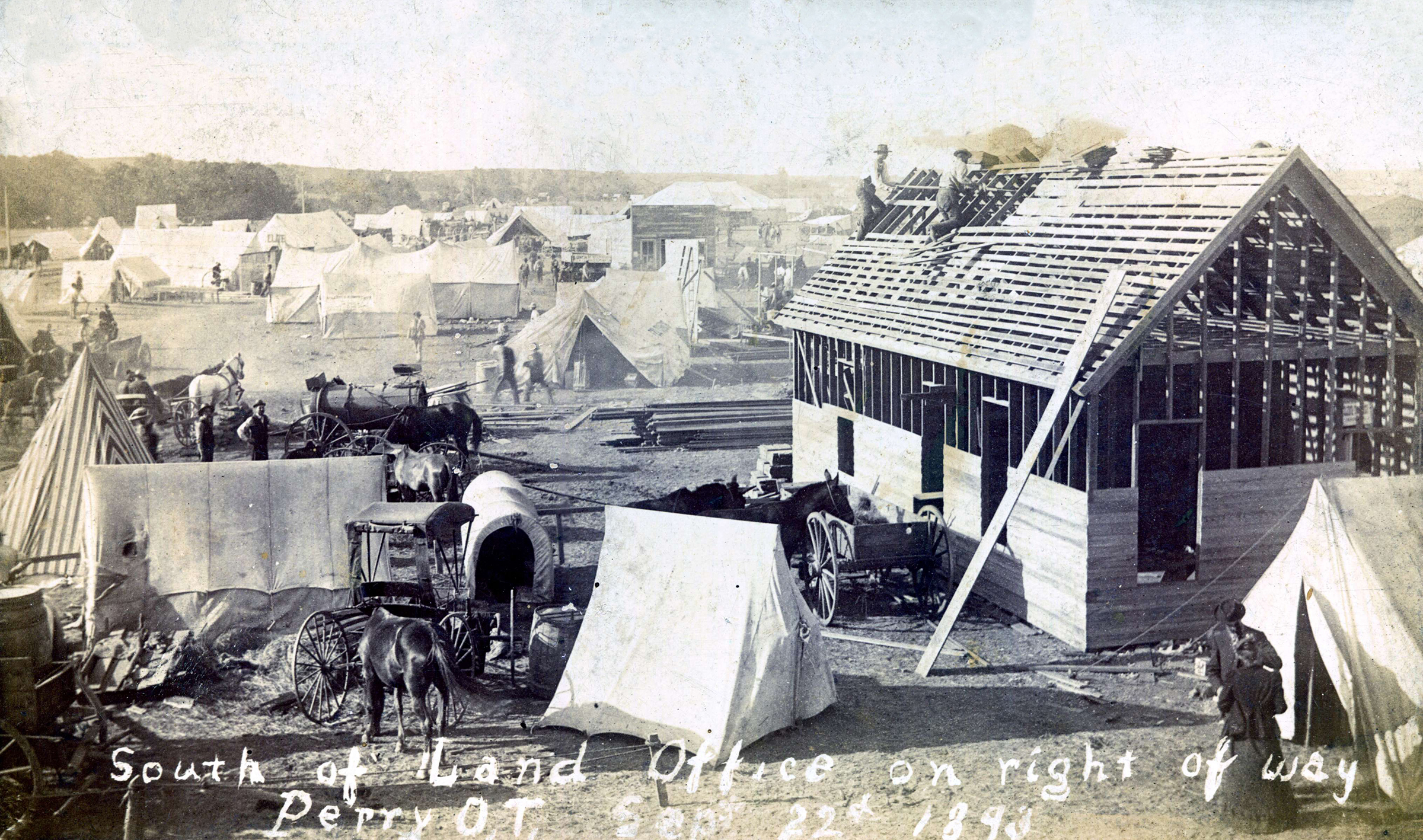 County seat of Noble County, Perry is located sixty miles north of Oklahoma City, two miles east of Interstate 35 at the junction of U.S. Highways 64 and 77. Early Indian inhabitants may have called an area south of present Perry "mendota," meaning "many dead men," referring to a battle in which many were killed. When the Southern Kansas Railway (part of the Atchison, Topeka and Santa Fe system) built its line in 1886 through the Unassigned Lands of central Oklahoma, a siding, depot, and water station called Wharton was established near present Perry. A few Cherokee had filed on land around Wharton. The federal government selected the site for the placement of a land office for the Perry district before the 1893 Cherokee Outlet Opening. The land office was located a mile north of Wharton and named for J. A. Perry, one of the men sent by the government to lay out the land-office towns.

The morning of September 16, 1893, the land north of the Unassigned Lands was a barren prairie. Perry consisted of the land office and post office, the railroad station being a mile south. When the gunshot sounded at noon, thousands of people on the lines, north and south, ran for the land available for settlement. Much money had been offered for photographs of the previous runs, but no photographers had attended. This time several were on hand, as the money offered by the newspapers and magazines was worth more than a farm. Perry became incorporated on September 20, 1893.

An estimated twenty-five thousand people spent the first night in Perry. As lumber had been illegally sent to Wharton in a bundle labeled "Land Office," buildings sprang up there like mushrooms, and a saloon was in full operation by four o'clock that afternoon. Trains did not stop in Perry, but did in Wharton. This created a problem with freight, which had to be hauled to Perry from the siding over roads fording Cow Creek. To make matters worse, there was no way to know whether freight had arrived except by making the trip to Wharton. Passengers also had to detrain there, with no way to communicate their presence. Before the end of 1893 a telephone line had been constructed from the southeast corner of the square to Wharton. This line was soon extended to Pawnee and Stillwater, because these towns also lacked train service. The line was further extended and in 1919 became the Southwestern Bell Telegraph and Telephone Company. Perry's original town of 320 acres soon had five additions. By 1900 the population numbered 3,351 and at 1907 statehood, 2,881. Three school buildings were constructed in the late 1890s, and on the town square a two-story, wood-frame county courthouse was erected. It was replaced by a substantial stone building in 1915–16. Eight churches served the 1920 population of 3,154.

Perry was the home of Gov. Henry S. Johnston, who arrived and opened a law office after the land opening. He spent the rest of his life here as a lawyer except for the two years during which he served as governor and lived in Oklahoma City. He served as president pro tempore of the 1906 Constitutional Convention and was the first to occupy the governor's mansion. Buster Keaton claimed Perry as his hometown, as he spent his summers there with his grandparents. He went on stage for the first time in Perry at the Grand Opera House, a place in which many entertainers played, including John Philip Sousa, Will Rogers, and the Polly Circus, which featured a live elephant, five horses, and a troop of Shetland ponies, all on stage. A number of newspapers have informed the community, including the turn-of-the-century Noble County Sentinel and the Daily Democrat and the Daily Journal from 1946 into the twenty-first century. The population continued to grow, climbing to 5,045 by 1940 and peaking at 5,796 in 1980.

Throughout the twentieth century the community's main economic activities and sources of income remained wheat farming, agribusiness, cattle raising, and petroleum production. In 2003 Perry's largest employers were CMW (Charles Machine Works), makers of the "Ditch Witch" trenching machines, and Division IV of the Oklahoma Department of Transportation. One of the smallest towns to receive a Carnegie Library grant, Perry has used the building continuously since 1909. Perry Lake Park, called CCC Park, was built by the Civilian Conservation Corps during the Great Depression. The lake, boat dock, and picnic shelters remain in use. Perry Airport, located seven miles north of town, was built as an emergency landing strip during World War II. The three five-thousand-foot asphalt runways were once used for jet airplanes from Enid's Vance Air Force Base but now serve Perry's residents.

The Cherokee Strip Museum preserves the history of the land opening and the region's development. In 2000, according to the census, half of Noble County's population lived in the city of Perry, which had 5,230 inhabitants. The 2010 census recorded a population of 5,126. Perry maintains an aldermanic form of government. Perry has four edifices and one district listed in the National Register of Historic Places at the turn of the twenty-first century. They were the First National Bank and Trust Company Building (NR 79002003), Noble County Courthouse (NR 84003361), Perry National Guard Armory (NR 88001362), Perry Courthouse Square Historic District (NR 03000881), and Wolleson-Nicewander Building (NR 79002004).

The following (as per The Chicago Manual of Style, 17th edition) is the preferred citation for articles:
Mildred Highfill, “Perry,” The Encyclopedia of Oklahoma History and Culture, https://www.okhistory.org/publications/enc/entry.php?entry=PE017.