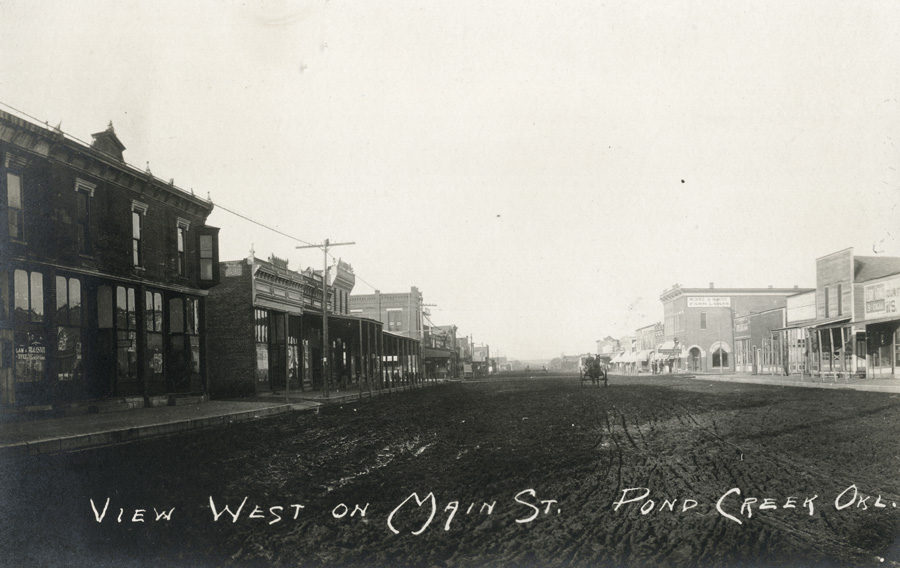 Located in south-central Grant County, Pond Creek is situated slightly east of the junction of U.S. Highways 60 and 81 (Chisholm Trail Highway). Approximately one mile north of present Pond Creek was the Pond Creek stage station on the Chisholm Trail. In 1889–90 the Chicago, Kansas and Nebraska Railway (later the Chicago, Rock Island and Pacific Railway) constructed a line from southern Kansas to Minco that passed through the future townsite.

The area was opened to non-Indian settlers during the Cherokee Outlet Opening on September 16, 1893. Subsequently, a post office was established on September 29, 1893, and Samuel H. Cummins served as the first postmaster. Originally known as Round Pond, Pond Creek was the county seat of L County (later Grant County) from September 16, 1893, to May 27, 1908.

Lying south of the Salt Fork of the Arkansas River, Pond Creek was a trade center for a surrounding agricultural area where farmers engaged in general farming and stock raising. In 1902 the community had two newspapers, the Grant County News and the Grant County Republican. Professional occupations included a dentist, several lawyers, and an architect. The Saddle-Rock and Shamrock restaurants advertised as short-order houses, and S. W. Burr owned the Pond Creek Cigar Factory. By 1909 the Congregational, Methodist, and Presbyterian churches had been organized. Area residents supported two banks, a flour mill, and several grain elevators. The town had electricity, water works, and a fire department. In 1918 two veterinarians, two horse breeders, a wagon maker, a harness maker, a blacksmith, and a dealer in horses and mules served the local community. By 1931 Pond Creek had 311 telephone connections, a library, city parks, and an airfield. In the mid-1940s the town had one bank, one weekly newspaper, and five churches, representing five denominations. In the 1940s and 1950s Pond Creek continued to have businesses such as a blacksmith, a hatchery, and feed and implement stores serving the rural community.

The following (as per The Chicago Manual of Style, 17th edition) is the preferred citation for articles:
Linda D. Wilson, “Pond Creek,” The Encyclopedia of Oklahoma History and Culture, https://www.okhistory.org/publications/enc/entry.php?entry=PO009.