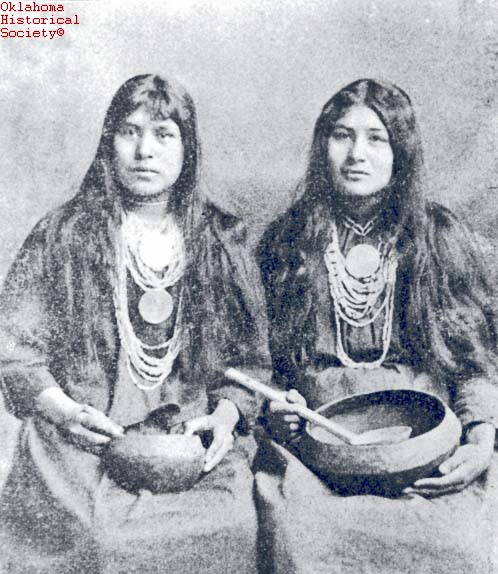 Numerous tribes in Oklahoma produced pottery up to the historic period (before the arrival of Europeans on the American continents), but only three, the Chickasaw, the Creek, and the Choctaw, have produced pottery in the historic period (after the arrival of the Europeans). All three tribes were removed to Oklahoma during the early nineteenth century from the American Southeast. Traditional, hand-built pottery remained in production into the twenty-first century, with many contemporary artists inspired by the designs of the prehistoric past.

Chickasaw pottery has been recovered from archaeological sites in the area of historic Chickasaw settlement in south-central Oklahoma. Three types (subsequently divided into six varieties), Rock Creek, Vaden, and White, were defined from the archaeological material. With a paste that is easily distinguished from the local prehistoric wares, Chickasaw ceramics display two distinct attributes not found in other historic pottery. The most noticeable is that the forms are copies of early-nineteenth century Euroamerican vessels. These include ring-footed bowls and teacups, both found in historic archaeological sites among Chickasaw pottery. The second and less obvious characteristic is that the vessels are occasionally painted. Indeed, the painting, which utilizes asphaltum and strongly resembles smoke clouding or a similar natural variation on the vessel surface, was overlooked by the first person to describe the pottery. Based on the wide spectrum of material recovered from Chickasaw sites, archaeologist Robert Brooks had expressed the opinion that the manufacture and use of Native goods made to emulate European goods was a matter of necessity rather than of choice.

Archaeologically defined as McIntosh Plain and McIntosh Roughened, the pottery types associated with the Oklahoma Creek are indistinguishable from Okmulgee Fields Plain and Chattahoochee Brushed, which are the late prehistoric period ceramics of the Creeks' central-Georgia homeland. The vessel form most commonly encountered in Creek pottery is a relatively large utility vessel used for cooking. Like many utility pots, Creek vessels exhibit roughened or unpolished surfaces, rounded bottoms, and a shape that allowed the food to be easily removed. Creek ceramics have been documented in use, and a number of specimens have been found and described in museums. In 1954 archaeologists described more than twenty such items in the collection of the Oklahoma Historical Society. The manufacture and use of traditional Creek pottery persisted at least until the end of the nineteenth century. A vessel collected among the Oklahoma Creek was displayed in Chicago at the 1893 World's Columbian Exposition, and an extensive collection of McIntosh ceramics has been reported at the Cow Creek Site, which dates to the last decade of the nineteenth century.

Historic Choctaw ceramics, recovered archaeologically from Oklahoma sites and noted in the Oklahoma Historical Society collections, occur in two varieties. The first is an unpolished utility ware that has been documented archaeologically, and the second, a polished black ware, has been recovered archaeologically, noted as specimens in public and private collections, and described in the historical literature. The most common form is a shallow bowl with an incurving lip. Most complete specimens in museums and private collections are approximately seven inches or less in diameter. However, archaeological specimens reveal that the same form was made in greater diameters. The most common decoration on Choctaw polished ware is "comb" incising. This technique consists of scratching the vessel's polished exterior surface with a multi-toothed tool before firing. The tool's close-set teeth create a series of parallel lines in various designs. Specimens with this decorative technique, recovered archaeologically, have been called Chickachae Combed, which is further divided into two varieties, Clarke for curvilinear designs, and Chickachae for angular designs.

Marshall Gettys, "Historic Choctaw Pottery in the State Museum of History," The Chronicles of Oklahoma 67 (Winter 1989–90).

The following (as per The Chicago Manual of Style, 17th edition) is the preferred citation for articles:
Marshall Gettys, “Pottery, American Indian,” The Encyclopedia of Oklahoma History and Culture, https://www.okhistory.org/publications/enc/entry?entry=PO027.