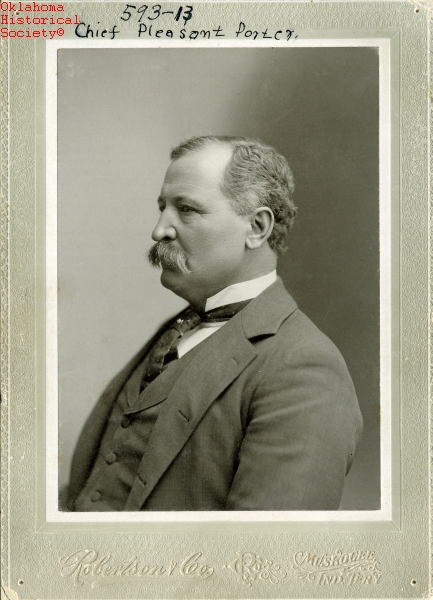 Rancher, businessman, and the Creek Nation's last elected principal chief, Pleasant Porter entered the world on September 26, 1840, in present Wagoner County. His parents were Benjamin Edward and Phoebe Porter, and his Creek name was Talof Harjo. His mother, a mixed-blood Creek, was a daughter of Tahlopee Tustunnuggee and Lydia Perryman; his father was an Anglo-American. Pleasant Porter was a member of his mother's Bird Clan. Growing up on the family plantation, he received his education at Tullahassee Presbyterian mission school. He was raised in a bicultural household, and was therefore able to operate in both white and Indian worlds as an adult. During the Civil War he served in the Confederate First Creek Regiment, rising to the rank of lieutenant. After the war he restored the plantation, but he made most of his living as a merchant and rancher, generally in partnership with Clarence W. Turner. In 1889 Porter made Muskogee his permanent home. He married twice.

Porter's significance to the Creek Nation lay in his service as an educator, diplomat, and elected government official. After the Civil War he was appointed superintendent of Creek public schools and developed a national school system. From 1872 he represented his nation in Washington, D.C., and after 1897 chaired a Creek commission that negotiated with the federal government on land allotment. He also served twelve years in the Creek national council. He stood for election for the post of principal chief in 1895 and lost, but he was elected in 1899 and reelected in 1903. However, the Curtis Act of 1898 had established that the end of all tribal governments would come in 1906, and Porter was poised to preside over the dissolution of the Creek Nation. Facing that, he helped organized a separate statehood movement for the Indian Nations. In 1905 delegates held an intertribal convention and drafted a constitution for a proposed Indian state of "Sequoyah."

Porter's later ventures included organizing in 1906, with Oscar D. Halsell, Ed Overholser, and others, the Indian Central Railway, a line that was anticipated to run from Ponca City to Muskogee to McAlester. The railroad was chartered in 1906 with Porter as president. On September 3, 1907, while in Vinita, Pleasant Porter suffered a stroke and died. A Presbyterian and thirty-third degree Mason, he was buried in the Porter family cemetery near Wealeaka and Leonard, in Tulsa County.

The following (as per The Chicago Manual of Style, 17th edition) is the preferred citation for articles:
Dianna Everett, “Porter, Pleasant,” The Encyclopedia of Oklahoma History and Culture, https://www.okhistory.org/publications/enc/entry.php?entry=PO032.